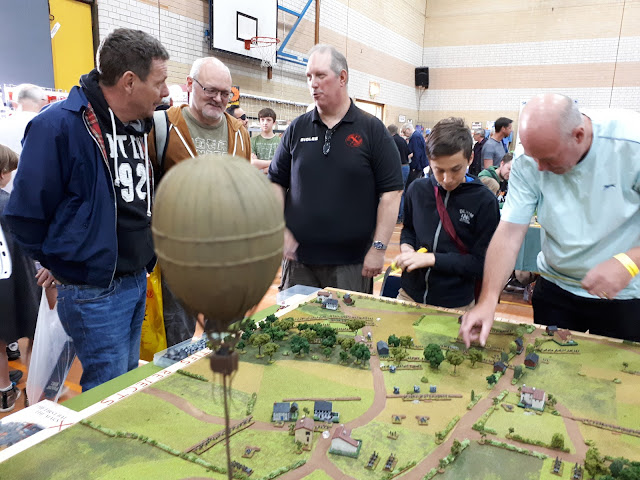 Yesterday Posties Rejects and other clubs put on a game at Broadside 2018.
Our game was WWI bash, The Battle of Marchais en  Brie 1914.
Which was part of the Battle of the Marne. 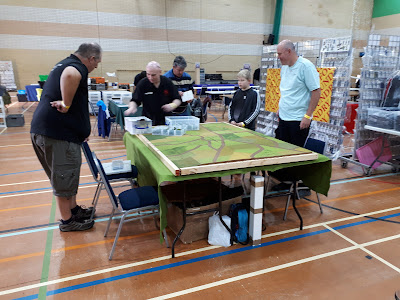 Lee, Postie, Oliver and Dave setting up the game. 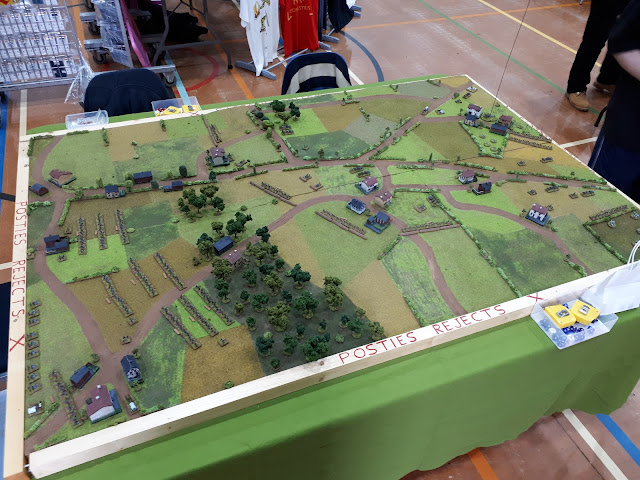 The Germans started the game protecting the low ridge and that was their only job, try and survive the French onslaught. The French had to take the town of Marchais en Brie in the centre of the table. 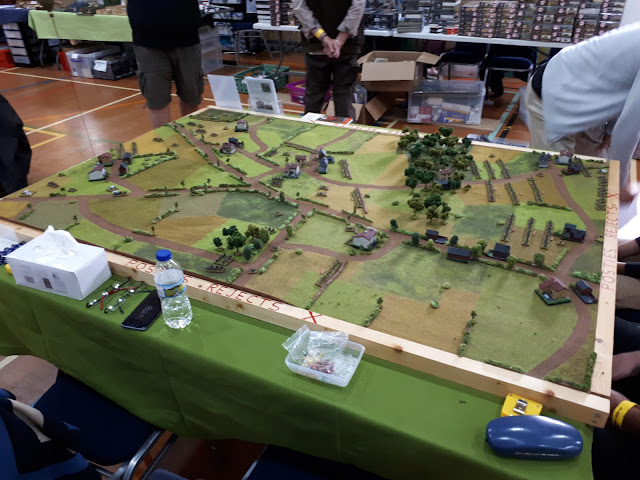 The table from the other side. 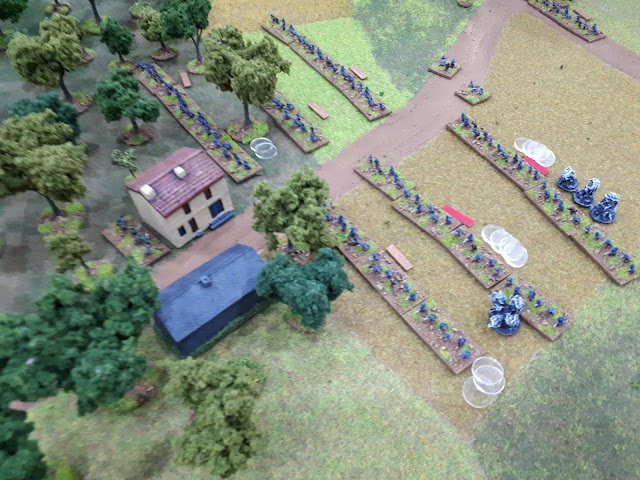 The French advance toward the woods,  the see through counters are casualty markers and the red markers are Courage tests. If the enemy throw a 10 on a D10 not only does this give you 2 kills but causes a Courage test, if you fail you're knocked back 4 inches. 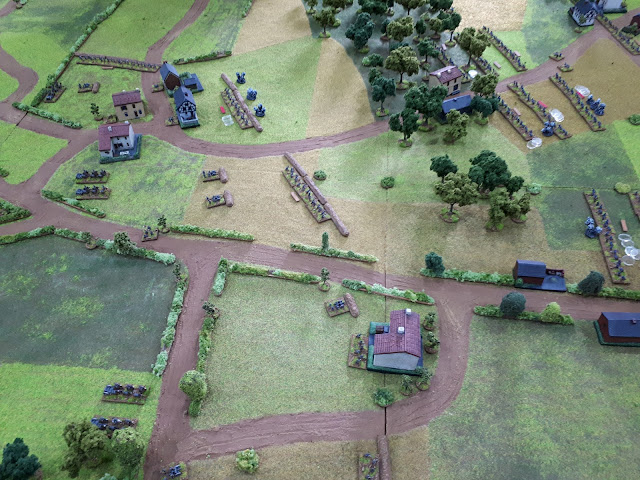 A general advance from the French. 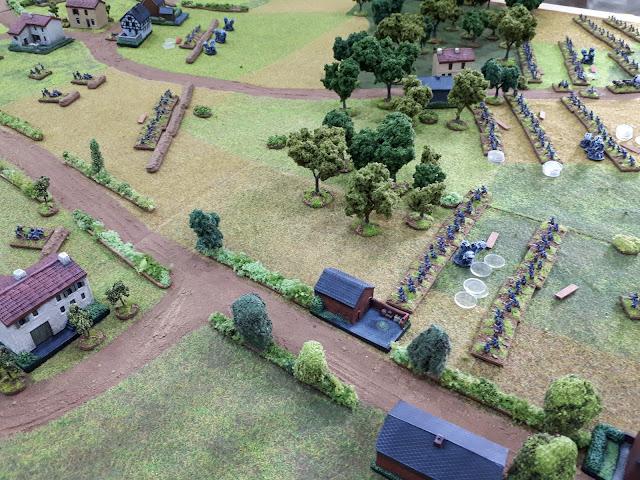 Getting closer, but taking lots of casualties coming in. 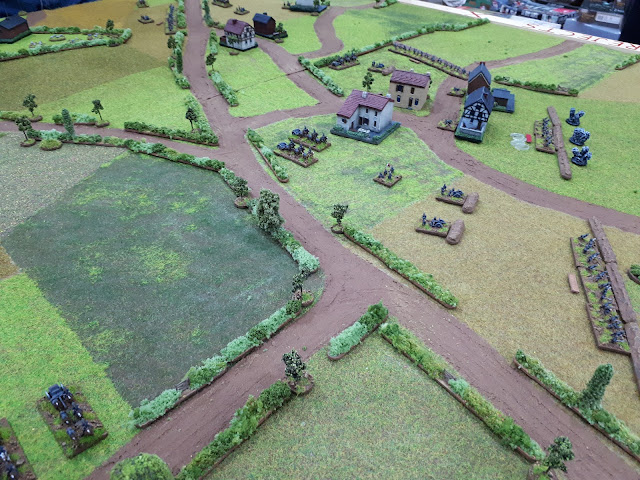 Bad news for the German's, top right of the photo, the German infantry have lost a stand and also need to throw for a courage test. which they fail and move back into the town, leaving a gapping hole in the frontline defences. 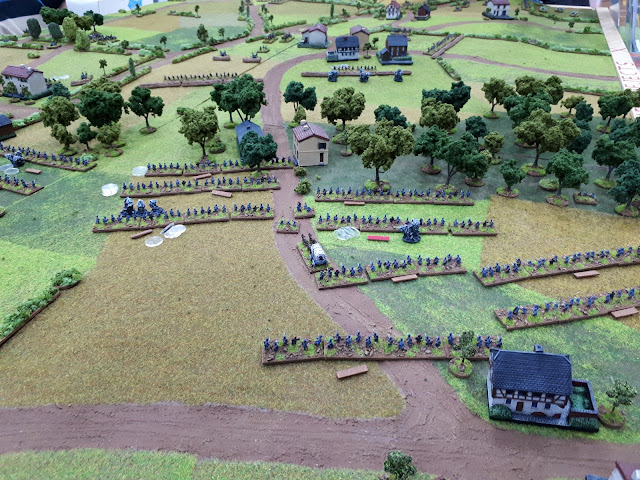 The Germans have 10 batteries of artillery firing every turn, the smoke markers you can see, represent the unit being fired upon and also how many guns are firing on it. 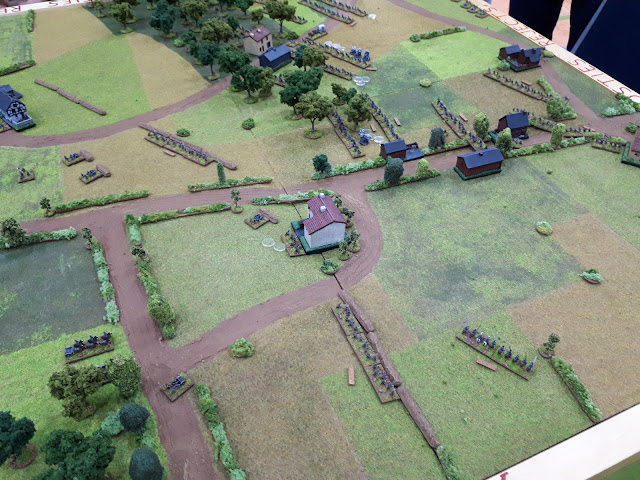 The French get some reinforcments on the right of the photo, and move them over the hedges to challenge their left, where the lone unit of Uhlans have moved into. 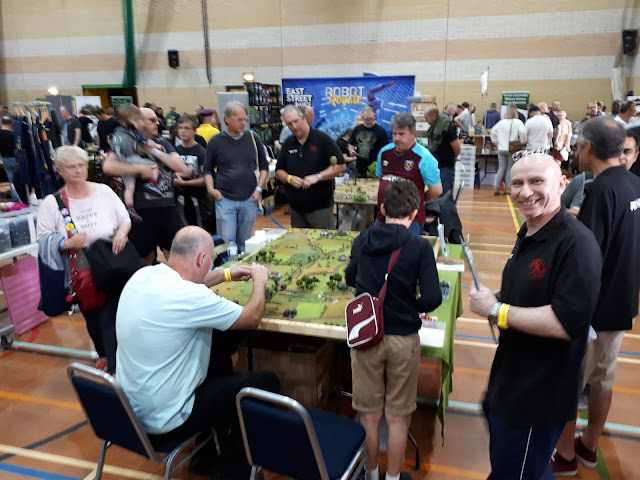 We had lots of interest from the public, myself, Richard and Lee's job was to advise the Rejects playing the game, but more importantly, chat to the gamers interested in our game. 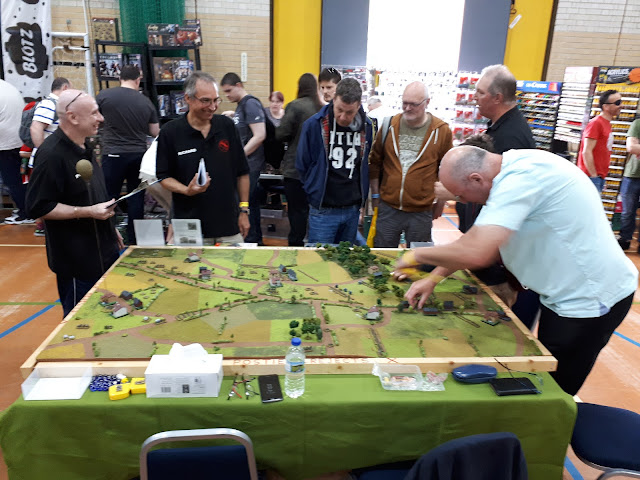 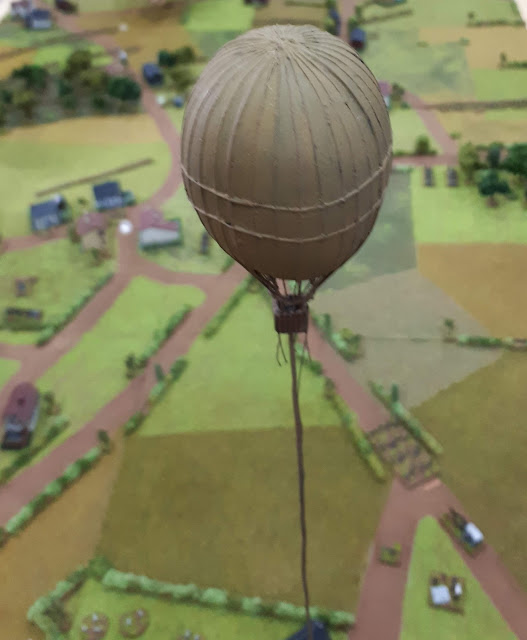 A German observation balloon, gave info to their artillery allowing them to fire at the French anywhere on the battlefield, while the balloonless French could only fire up to the crest of the hill.
The Balloon was handmade by von Postie himself, carved out of three pieces of balsa wood glued together!!! The German's were allowed to move 2 units from the rear, I think they may need them!!! 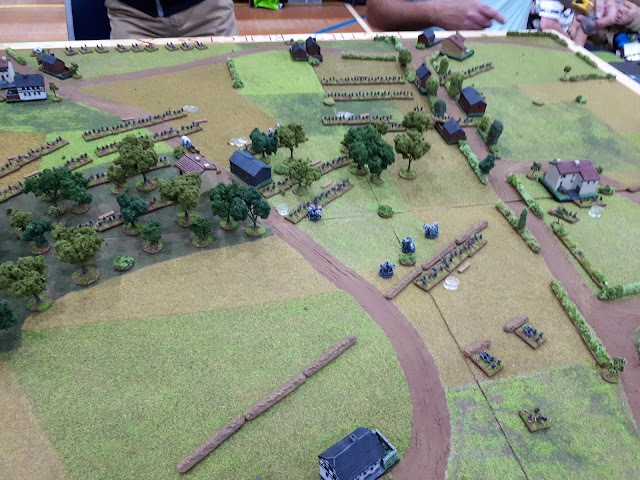 The French loses 1 inch movement and go down to 3 inches when moving through the woods, which is slowing them down quite considerably.
They are also trying to batter the entrenched German unit, firing all 9 guns at it. 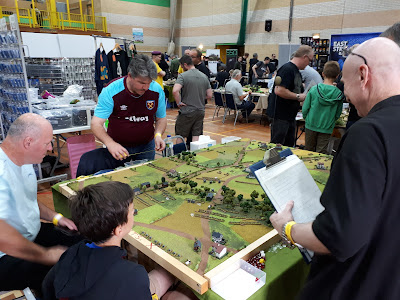 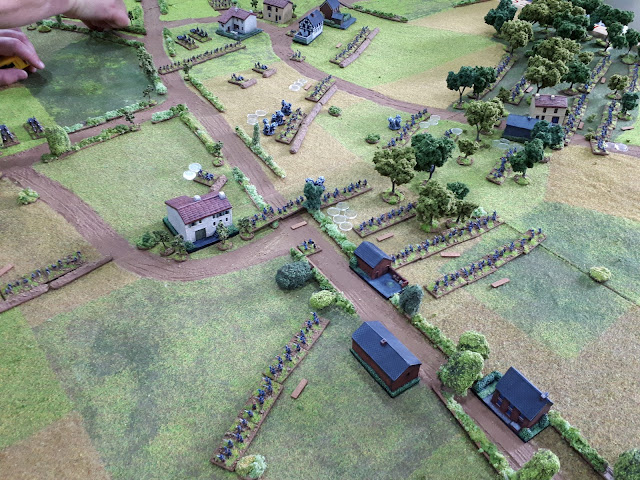 The French break through the woodline, but the Germans have moved troops down in the entrenchments, they look very strong again. 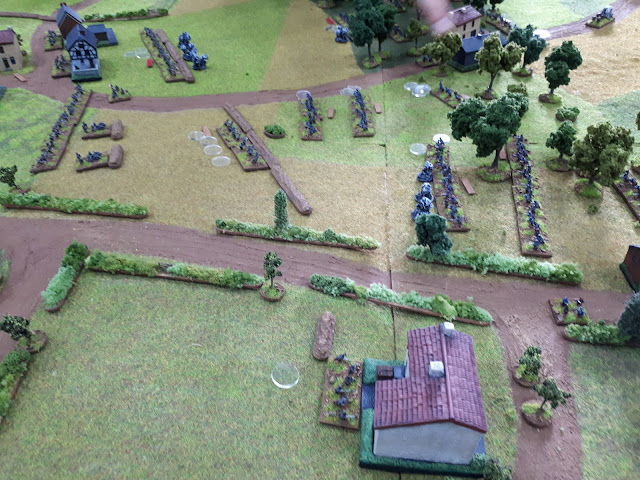 The German's manage finally to get a unit closer to the lines. But the French are now out in the open, they should get mauled by rifle and artillery fire. 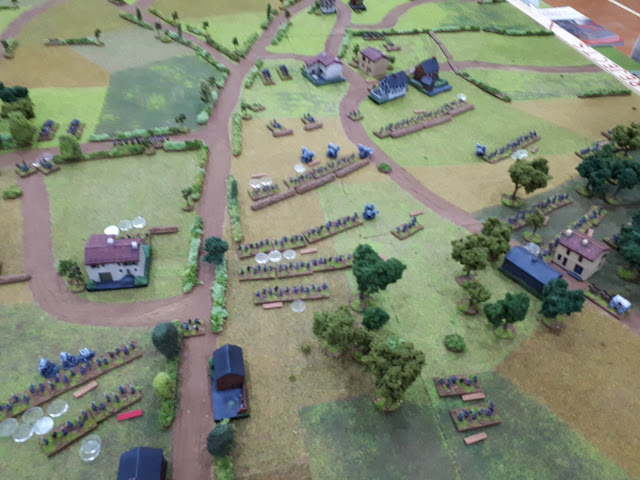 The French continue to take heavy casualties.....are they gonna make it? 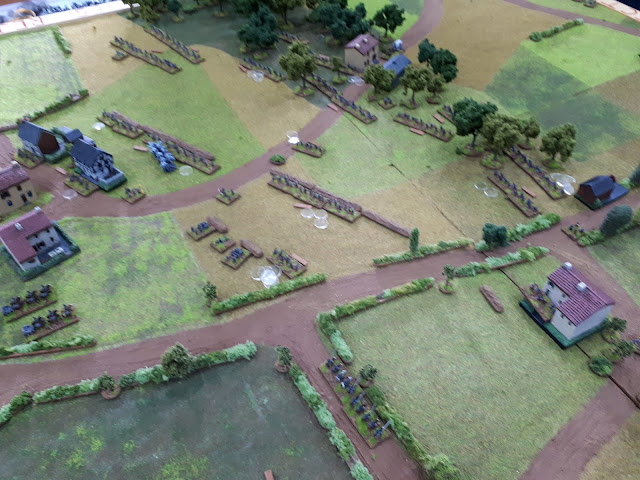 Its looking doubtful now as their units are pushed back in disarray! 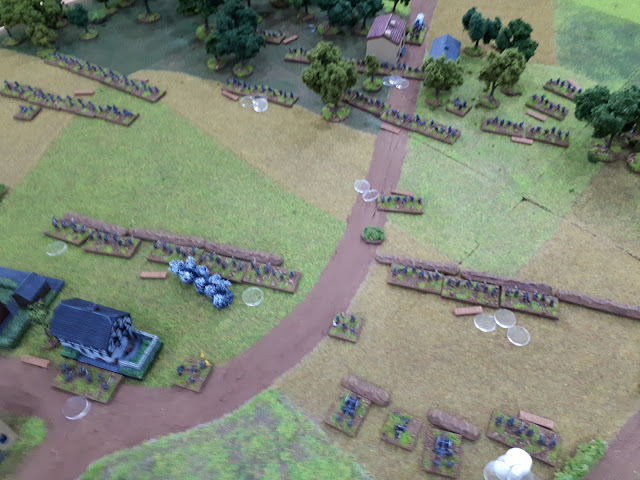 Times up!!!
Unbeknown to the guys playing the game, there was a 12 turn limit to the game.
The French failed to take the ridge so they all pull back, ready for another go in a night attack.
Which in reality is what did happen, and they did take the ridge that night, the German's gave ground and pulled back.

What a great game!
All credit's gotta go to Postie. He's spent the last few months painting all the figures, making the terrain tiles, hedges and entrenchments and writing the rules of course! 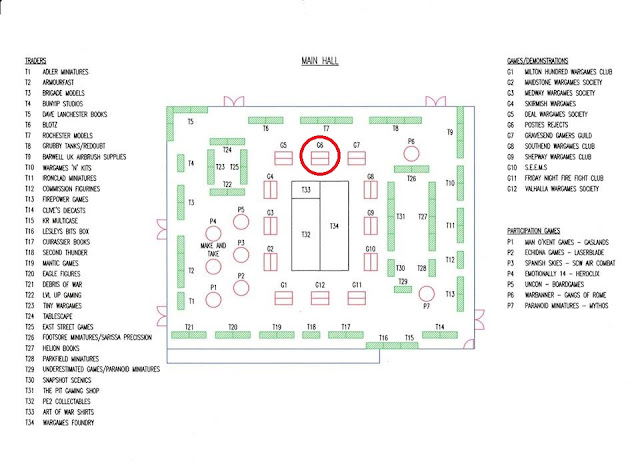 Posties Rejects will be putting on a Demo game this Sunday at Broadside
Wargame Show in Sittingbourne.
If you want to come along and see our 6mm WWI game, "The Battle of Marchais-en-Brie Sept 1914"
we'll be at table G6, in that big red dot above! 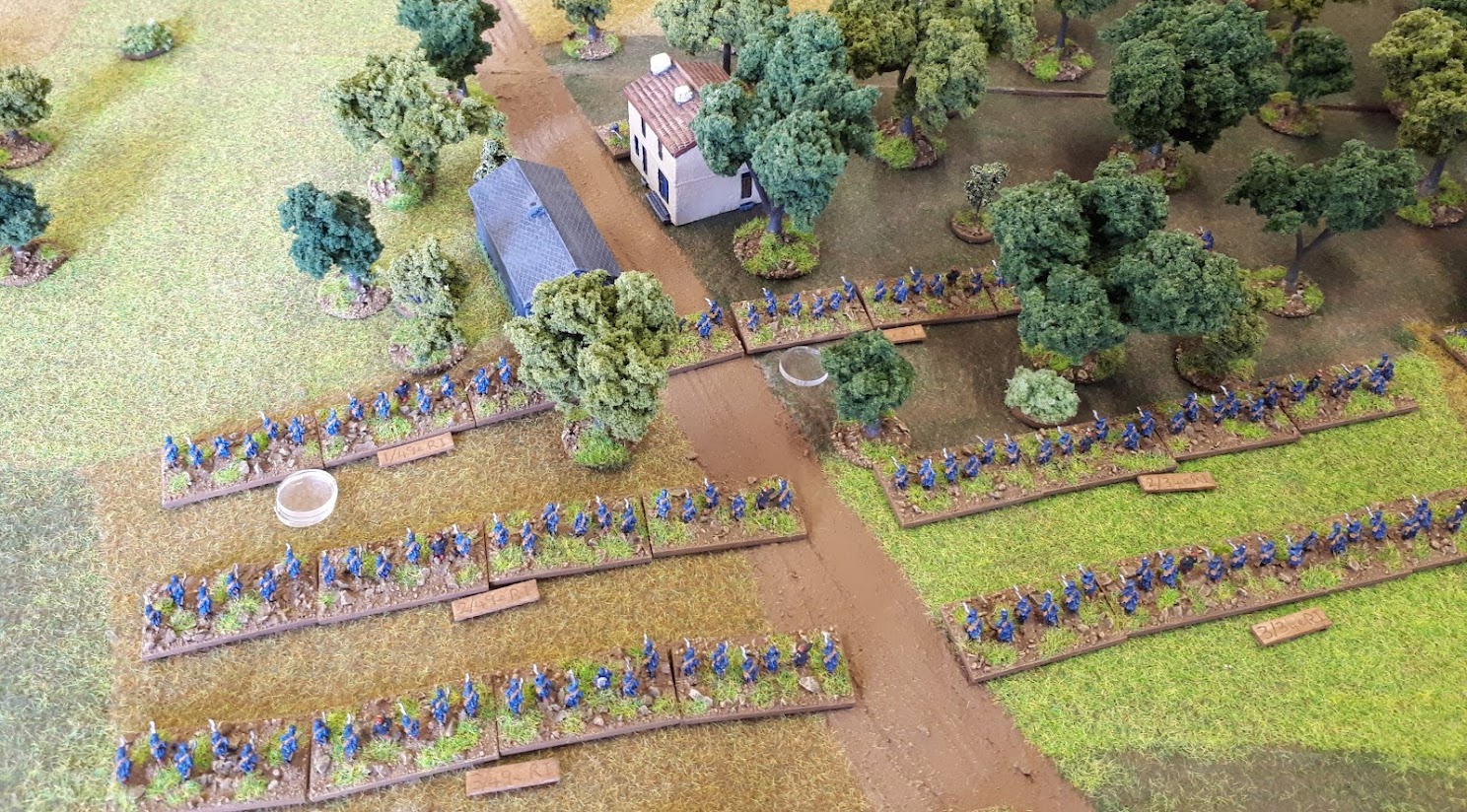 And here's another sneaky pic from our practice game!

Hope to see you there!!!