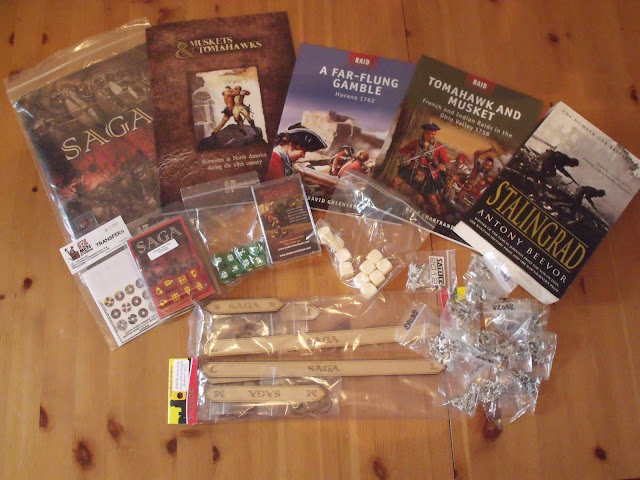 Just a quick post today, I thought I'd share my Salute Loot, (the title was pinched from BigLee's blog).
As you can tell by the pic, most of my money was spent on the Gripping Beast stand, I finally bought the Saga ruleset and two packs of dice, the Normans and Anglo-Saxons, unfortunately they'd sold out of the Viking set, so I'll make my own, hence the blank dice. I also bought the new Muskets and Tomahawks set of rules, which flicking through are remarkably similar to the set I've been writing myself!! Lastly I bought a pack of LBMS shields for the Gripping Beast plastic Vikings I bought at Cavalier in February.

Away from the Beast I picked up my order from Essex Minis, several packs of NYW 15mm figures to add to my ever expanding army, after examination I found they'd given me two packs I hadn't ordered instead of the ones I wanted, it was an easy mistake, not sure if it was mine or Essex's, but a quick phone call sorted the problem out, and a couple of days later I had the packs I wanted.

I also picked up two books from Osprey I'd been after for a while, even better I got one, Tomahawk and Musket for a fiver!!!

My last purchase were two sets the rulers and counters for Saga sold by Warbases, just gotta read the rules now!!!!

Lastly I met Honoury Reject Seb and he handed me my prize "Starlingrad" by Antony Beever,  that I won from his online competition a couple of weeks ago, so that's another book I've got to add to my reading pile, cheers for the prize Seb!!!!

An open invite to all and any bloggers went out by blogpost from myself, Fran and BigLee, the week before Salute. I must say I was very pleased and  impressed with the turnout. I'd like to thank you all for coming over and having a chat with the Rejects and bloggers. We'll definitely do it again next year!!!

The Posties Rejects T-shirts went down a storm as well, many a time I saw people staring at the logo, sometimes they spoke to me "Are you the Ray from Don't throw a 1?", to which I'd proudly answer, Yes! But most of the time they'd stare and walk straight off, probably  thinking, "Whose that prat in the crap t-shirt!!"  I even got recognised by one of the guys on the Gripping Beast stand!!!
Oh the fame!!!!!! 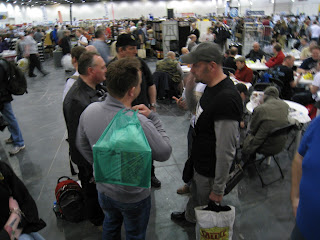 On the right is Curt from Analouge Hobbies and behind him is Dallas's foot,
Dallas being from Fawsett Avenue Conscripts, sorry Dallas that's the only pic I got of you?

I also met and spoke to Al from The Wargames Shed
Michael from Dalauppror
Jay from The Raptors Nest, Didn't actually speak to Jay or his wife, I turned around and they'd gone! But they both had a good chat with Fran.
Monty and his pal from Monty's War Gaming
Andy from The Lair of the Breviks
Seb from Back to the Minis
and
Simon from Iron Mitten
If I've missed anyone out please accept my apologies! 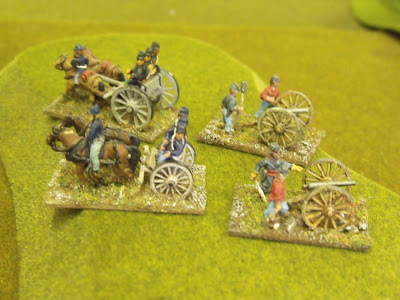 As our WWII game at Salute was cancelled the Rejects decided to host a game for Curt and Dallas, who were coming over to the UK from Canada on holiday. Things went a little tits up, firstly Dallas had to pull out of the game, then Reject Richard pulled out, the day before Salute, so panic ensued and two replacements were pulled in from cyberspace, Seb and the only Wargaming girl I've ever met Tamsin were both drafted in for the game.

There were only 4 turns played but what a four turns they were, we managed a measly 44 melee's!!!! 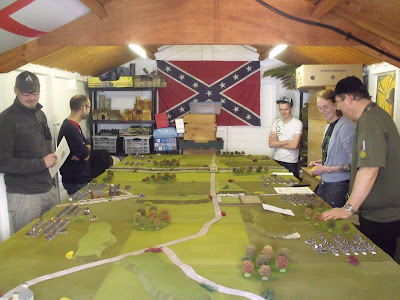 Postie used the whole table 14x6
On the left Curt and Seb.
On the right BigLee, Tamsin and Jack ,I think Fran was stirring the pasta! 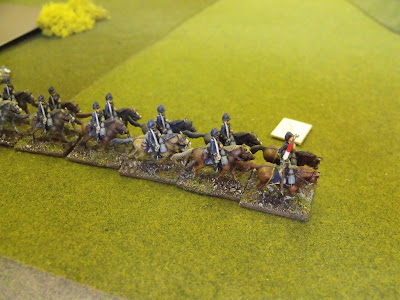 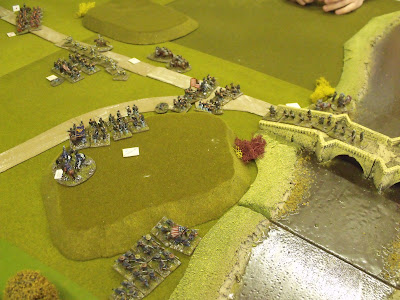