Just one flag in todays post, it's my version of King Harold Godwinson's fighting man standard. It's the same basic template as my Viking flags. I found a picture of a Saxon huscarls online and coloured it gold changing it slightly to try and make it look like the figures on the Bayeux Tapestry. I've a few more Viking flags all ready, but that's another post!!
Posted by Ray Rousell at 17:12 10 comments:

As some of my followers may already know, I've been painting up a 15mm English/Allied army for the Nine Years War, a couple of weeks ago I found the Gerpines list on the Anno Domini 1672 blog, Link, which looks like a photocopy from an old book. So me be the anal nerd I am decided to try and make the list a little more user friendly and I though t I'd share it with you all.
I've colour coded the list for ease, the original layout of the list is in order of how the regiments stood in line on parade, I've changed my list so that all the regiments are in order of their country of origin. You may notice a few question marks, unfortunatly I either couldn't read or guess some of the letters in the original list, so if any of you clever people out there, know what's missing, please let me know and I'll correct the list. 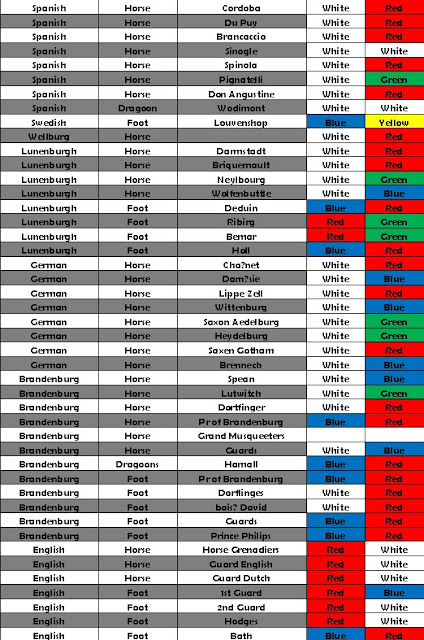 The Portuguese Militia were raised by conscription on a local basis, the kingdom being divided into 48 regions , each of which were to supply a regiment. These regions were combined into three divisions called the 1st South, 2nd Centre and 3rd North, each of which contained 16 regiments.

Once again these are from the collection of Postie the Megalomaniac, I painted these last year at the same time as the Tomar Milita that I posted earlier on. The figures are by Essex and are based up for Posties version of GdB. 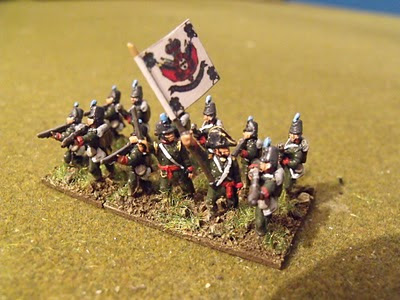 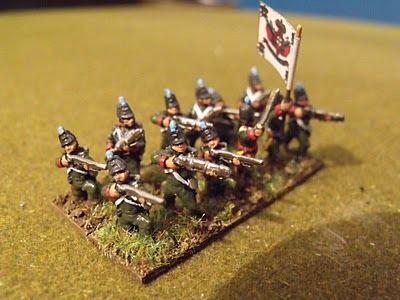 Three more Viking banners to add to the collection, I have some more that I'll post at a later date, hope you all like them and please use them for your Dark Age armies.

Recently Painted No10 Neapolitan Horse Artillery of the Guard 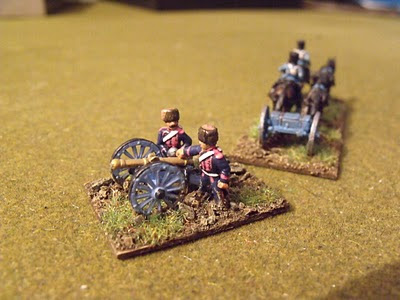 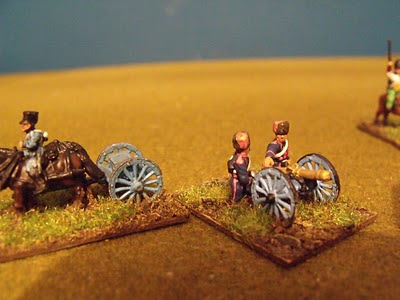 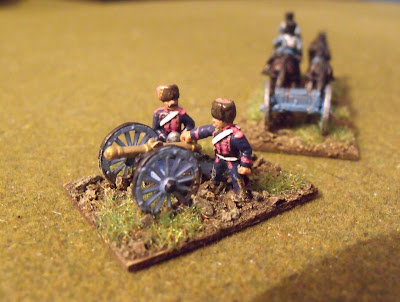 Another dip into Posties collection, painted by myself. Today’s unit The Neapolitan Gardes d'Honneur, circa 1812. The figures are made by Essex Miniatures, but are not specific Neopolitans, they were a unit he bought unpainted on Ebay and the figures just happened to fit the description of the unit, not really sure exactly what they are based on.
The Gardes d'Honneur are another difficult unit to find info about, Postie does pick 'em!!
They served in the Grand Army on their tour of Russia in 1812, in the 11th Corps, 33rd Division under General Destrees. At the end of 1813 they had a name and uniform change becoming the Neapolitan Gardes du Corps. Their uniform changed to a Bicorn with a white plume, a red tunic with red cuffs, yellow turnbacks and lace, white epaulettes and breeches, with a blue saddlecloth. 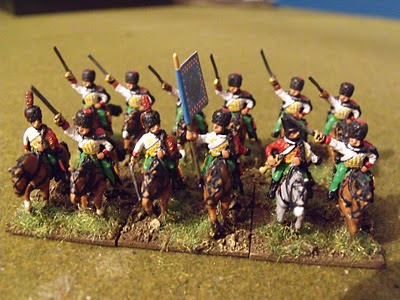 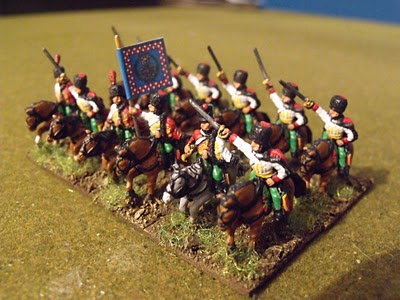 ﻿Another of Posties Napoleonic units I painted late last year, are the Portuguese Tomar Militia. Once again they are made by Essex Miniatures and are based up to Posties version of GdB. Postie has given them a normal infantry flag, but we're not really sure what their flag would have looked like, if they carried one at all.
I struggled to find any info on this unit all that I could find was that they were raised mainly for garrison duty but fought in the Battle of Bussaco on 27th September 1810.
They were in the General Leith's 5th Division, in Spry's Portuguese Brigade along with two battalions each from the Portuguese 3rd and 5th line regiments. They did not equip themselves very well during the battle, as they ran off in disorder. 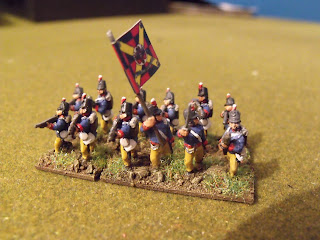 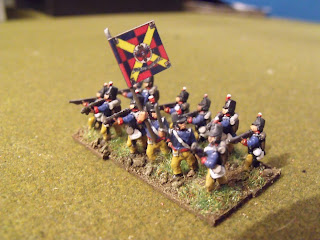 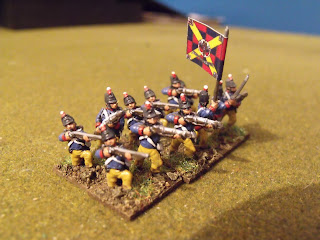 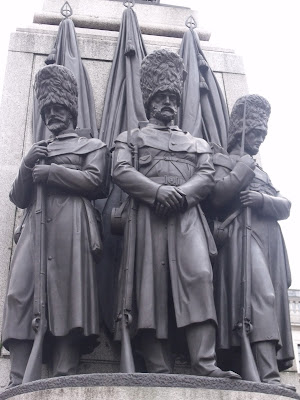 On New Year's Day, me and the wife took my two youngest daughters up to Hamley's toy store in London, to spend some Christmas and birthday money, we went up by train,  for an extra £4 we went on the new fast train via Ebbsfleet station. It was fantastic, we were in central London in less than 15minutes,  it usually takes 40 minutes for a fast train from Gravesend.
We walked down to the Cenotaph, but it was blocked off for the New Years Day parade, but I took a few photo's of the Crimian War Memorial, which is is located on Waterloo Place, at the junction of Lower Regent Street and Pall Mall in London, about a quarter of the way from the Duke of York Column to Piccadilly Circus. I've been in the area loads of times and never noticed the memorial before and was very impressed.
Originally it was unveiled in 1861, consisting of the statues of three Guards Men, with the female allegorical figure referred to as Honour. It was cast in bronze from the cannons captured at the siege of Sebastopol. The sculptor was John Bell.
On the front, by the statues of the Guardsmen are two plaques. The uppermost states: "The Guards' Memorial was pulled down in the year of our lord 1914 and was re-erected 30 feet north in order to permit the erection of the Florence Nightingale and Sidney Herbert statues." The Lower one states: "The foundation stone of the Guards' Memorial was laid in the year of our lord 1861 by Margaret Johanna Bell."'
On the back facade of the monuments, facing the road up to Piccadilly is another plaque, a shield surrounded by foliage and mounted on guns, this reads:
"To the memory of 2152 Officers, Non-Com. Officers and Privates of the BRIGADE OF GUARDS who fell during the war with Russian in 1854-56. Erected by their Comrades." 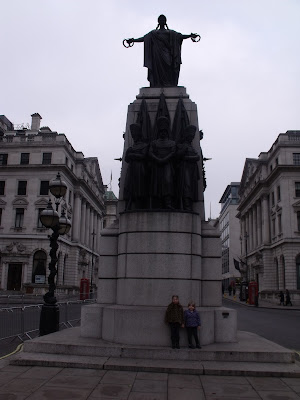 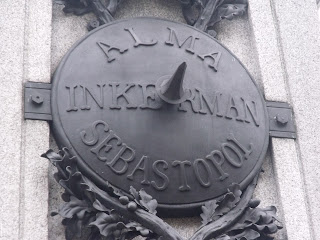 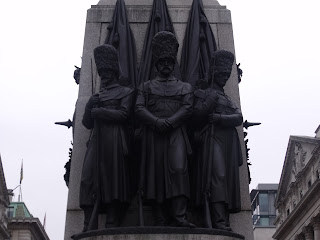 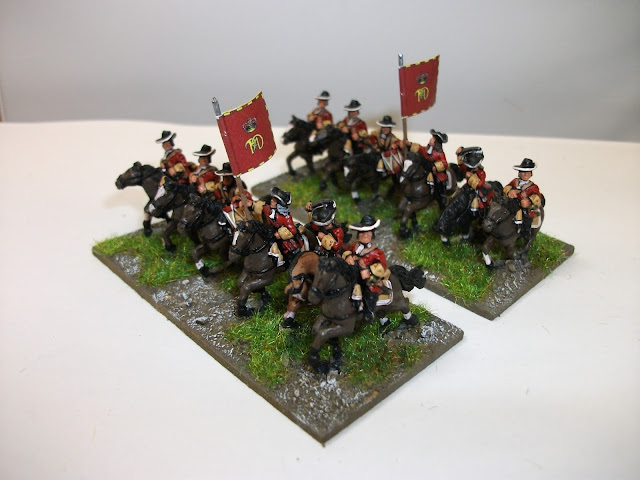 My last painted units of 2010 are 2 squadrons of Princess Anne of Denmarks's Horse﻿ for the NYW. They're Essex miniatures based up for BLB Rules.
I've tried for a week to find any info about this unit and only found a small amount.
The regiment was raised 30th July 1685 by Robert Lekes the 3rd Earl of Scarsdale's and were known as Scarsdale's/Princess Anne of Denmarks regiment of Horse. On 1st December 1687 Charles Beauclerk  the 1st Duke of St Albans became the new regiment's Colonel. Sometime after this date Thomas Langston became their Colonel.
On the 3rd August 1692 the regiment fought at the Battle of Steenkirke, where they were virtually destroyed covering the retreating allied army. Soon after the battle the regiment was disbanded, which seems a bit unfair after their valiant effort covering the retreat. The survivors were transfered into other Horse regiments and also to Langstons new Horse regiment taking over Godfrey's Horse. 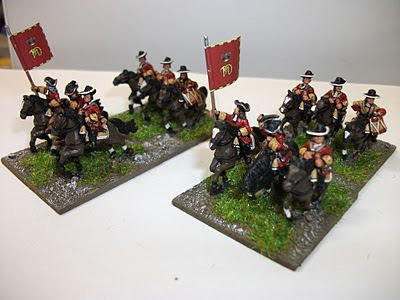 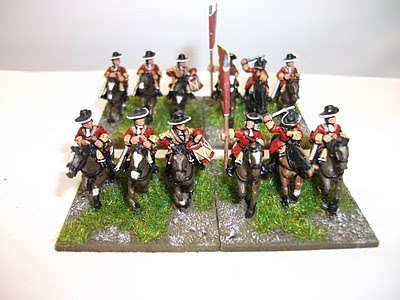 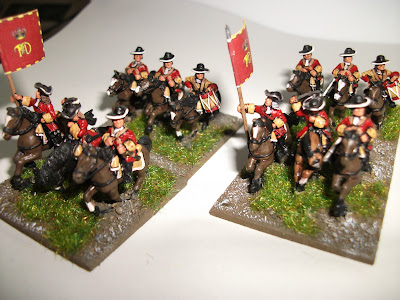 Email ThisBlogThis!Share to TwitterShare to FacebookShare to Pinterest
Labels: 15mm, Beneath the Lilly Banners, League of Augsburg, NYW, Recently painted

Henry Clifford, 10th Baron de Clifford, also 10th Lord of Skipton was born in 1454 and died on the 23rd April 1523, his father John the 9th Baron de Clifford fought on the Lancastrian side during the War of the Roses, after he was killed in battle, Henry, aged 7 at the time was sent away for his own safety by his mother, (as the King had put an attainder on him), to Londesborough and then onto Threlkeld in Cumberland.
When King Richard III was killed at the Battle of Bosworth on the 22 August 1485, the attainder was lifted, so Henry could move back into the family home.
In 1513, at the ripe old age of 60, Clifford, was called into service by Earl Percy of Northumberland who intended to repel the attacking Scots. He mustered the flower of old Craven, bringing 207 bowmen and 116 billmen liveried in the red wyvern. At the Battle of Flodden he fought in the centre battle of the English vanguard under Thomas Howard.
Posted by Ray Rousell at 19:08 8 comments:

Now Reading - The Man in the Iron mask by Roger Macdonald

Firstly I'd like to say Happy New Year to all my followers and readers, I hope you all had a great Christmas and a Happy new year. I'd also like to thank you all for visiting my blog in 2010 and I hope I can keep you all visiting my blog in 2011.
I read this book last year and have just started to re-read it again as I enjoyed it so much the first time. It’s fascinating finding out that Alexandre Dumas’s fictional tales of the Man in the Iron mask and the Three Musketeers are all based on fact, to which I was totally unaware. I found the book a little hard to follow in places, only because of all the French names, but the author has kindly written an index of all the famous names at the front of the book as a reminder.
I won't tell you too much about the book as it would spoil the surprise, but its all about the build up, as he (the author), prepares you to be aghast as to who he believes was the man in the iron mask. My favourite fact is that d’Artagnan, the future Duke of Marlborough and the soon to lose his head the Duke of Monmouth all fought side by side at the same siege. 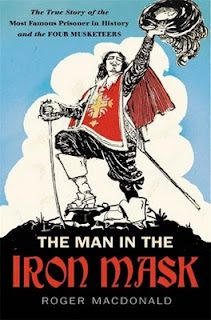 “Alexandre Dumas said that his famous Three Musketeers never existed, but Athos, Aramis and Porthos were actually real flesh and blood. Their supposedly fictional duel with Cardinal Richelieu's guards actually took place in 1640 and Charles d'Artagnan, a teenager on his first day in Paris, fought alongside the Musketeers.
According to Oxford historian Macdonald, several other elements of the tale are also based in fact — the Cardinal's agent, Milady de Winter, really was an English aristocrat, and against all odds, the country boy without influence, d'Artagnan, did succeed in becoming Captain of the King's Musketeers, the only man whom Louis XIV could trust to arrest his over-mighty minister, Fouquet. It was d'Artagnan who escorted Fouquet to the feared Alpine fortress of Pignerol, wherein lived the most mysterious of all prisoners, the Man in the Iron Mask.
Macdonald has spent five years unraveling fact from fiction to reveal the true story of the Musketeers and their link with the Man in the Iron Mask. It is a reality more extraordinary than anything Dumas could devise. Honor and heroism, betrayal and intrigue, are set amidst the lust, jealousy, and deadly poisons that made the Sun King's court a world of glittering paranoia.”
Posted by Ray Rousell at 20:45 5 comments: