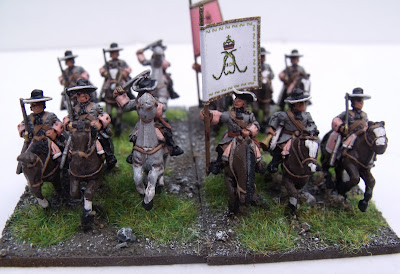 Back to the Recently painted posts and back to my Nine Years war army. This is my second Dutch cavalry regiment and was extremely difficult to find any info about.
Dutch Horse Regiment No9, Waldeck. The regiment was raised in 1635 as the Vaan Cuirassiers, fast forward to the 23rd February 1667 and the new Colonel was George Frederick, Graaf van Waldeck-Pyrmont, Waldeck was made Field Marshal of William of Orange's army in 1688, he commanded the allied army at The Battle of Walcourt in 1689, which ended in an allied victory, but lost The Battle of Fleures the following year and The Battle of Leuze in 1691. Waldeck died in November1692. On 14th January 1693 Ernst Frederick, Herzog von Saxe-Heilburg-Hildburghausen became the new Colonel until I believe 1709.

Up until 1692 the regt wore a Grey/White coat lined red, but so it seems did most of the Dutch cavalry for the period. I've chosen to paint the unit up in the colours of the Saxe-Heilburg uniform, a Grey coat lined in pink, the main reason for this is the flags are known, I downloaded these flags from the Warflag website, and slightly changed the pink colour to a brighter shade of pink. I cannot find any information as to whether the regiment fought in any major battles during the Grand Alliance period, but you don't get to paint many pink units, so there you go...... Dutch Horse regt Waldeck.
If anyone can add any further info about this regt it would be greatfully received!!!!
The figures are from Essex and the bases are by Warbases, they are based up to BLB rules. 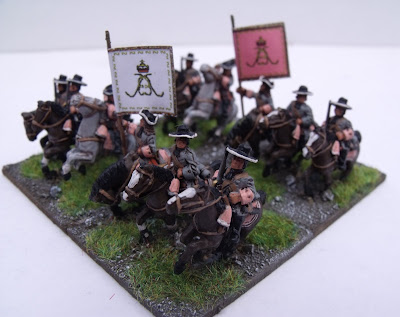 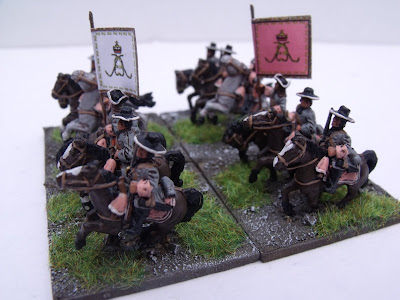 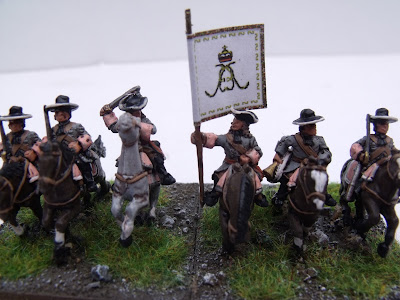 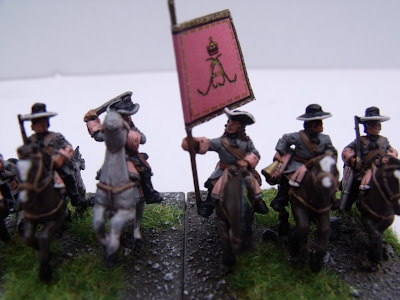 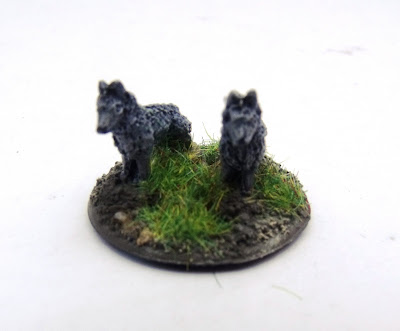 Aaarrrggghhh!!!!!! Apologies the first part of this post is a little bit of a Rant!

Its been over a week since my last post, what's going on??? I here you ask. Well the simple answer is School Holidays!!!!!! The wife has got herself a new job, which means school holidays are a problem from now on, so I was Told,  I need to take some holiday to look after the 2 youngest brats. Fair enough I suppose, now this is where things went tits up, I made a plan, I should know by now at 43 years of age never make a plan, for me, it never works. So first day of my holiday what happens?? My old war wound comes back to haunt me, actually I pulled my back out, when my back goes it goes big time, all I did was bend over to pick up the TV remote, that I'd asked the kids to pick up about 23 times, it felt like that mad axe killer in all the crap horror films came up behind me and chopped the back in half! So all my decorating, figure painting, rule writing Call of Duty playing and kid entertaining went out of the window, instead of that I sat for the week watching crap kids TV,  and was slowly driven crazy by Holly and Nieve arguing all the bloody time.... deep breath!!!!! I don't really remember the first day too much, my wife who was luckily off that day gave me one of her painkillers, (naughty I know), I drifted off, wide awake to a happy place with no pain and elves and fairies, (I watch far too much kids TV)
Anyway today my wife has taken brats 3 & 4 to a farm, brat No2 is starting a new Saturday job and Brat No1 is up her boyfriend's, probably?? So its me and the dog in the house for 4 long hours....ah bliss!!!!!

So I've very carefully taken the opportunity to take some photos....... So after that big moan above here we go!!

As some of you will already know, my previous post was about the three bears, today's is about their fellow woodland creature... The Wolf!!
After I bought the bears on ebay I started to try and think of other animals that I could possibly use to make trouble for the troops in the FIW. I searched the net for a company who sold 15mm wolves, sadly it seems nobody does, apart from fantasy looking wolves, which were either far too big or just looked silly. I even had Postie searching all his old wargame catalogues, he came up with an idea though, I'd previously bought some 15mm dogs from Irregular Miniatures, this were to use in my Indian village and perhaps as the faithful hound of a British Colonel during the FIW.
So a quick call to Irregular Minis, I ordered 6 x FAN11 Alsation dogs, and hey presto we have a wolf pack, ok they don't really look like wolves, but they do fine for me!!
Thanks have got to go to Barry S, for giving me lots of ideas, click his name for his blog or this one for his Photobucket site, There's some beautiful work here, there's lots there that I've got to make!! 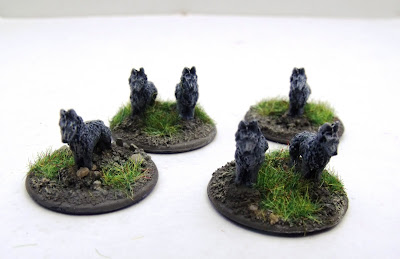 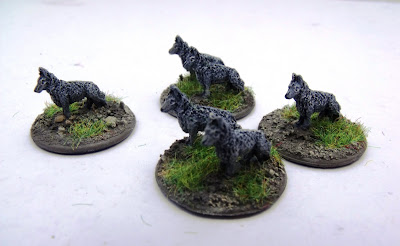 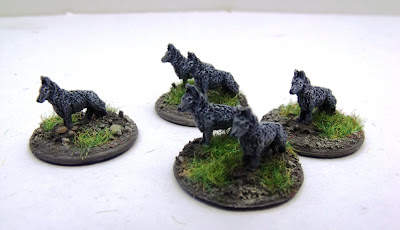 Lions and Tigers and Bears oh my!! 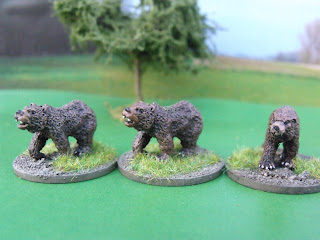 Why? why? why? I hear you say. The simple answer is "How the hell do I know?".
Ok, ok, I've been painting up a few wild animals for my 15mm FIW skirmish game, instead of painting up the units I need to play the game, (lots more French line needed). I thought I'd take a break from the normal hum drum of red coats and Napoleonics and get something else painted for a change. The 3 bears where an Ebay impulse buy a couple of months ago, I believe the figures are from Magister Militum, I think I paid 99p for them!!
Whilst painting one evening, with all thoughts wargame running through my simple head, I came up with the idea of adding some animals to my FIW project, just to add a random factor to the rules,
Somewhere in the deepest darkest forest.......
"A Ranger company is trying to sneak up on an Indian encampment, they move past a strategically placed rock and out jump the three bears, minus goldielocks of course, the bears then create havock, kill a few Rangers and alert the sleeping redskins that their foe is a'coming". 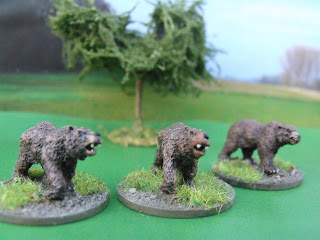 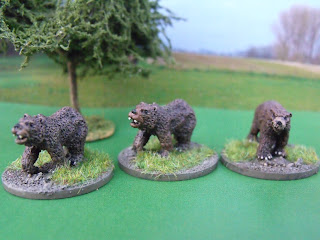 Email ThisBlogThis!Share to TwitterShare to FacebookShare to Pinterest
Labels: 15mm, FIW, why? 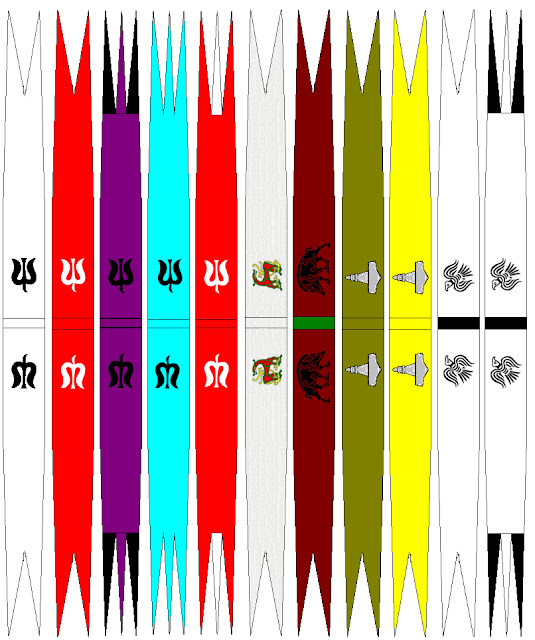 I've been asked by several other Viking fans to make up some Viking flags to use on their Longships, so here we are just for Paul in his Mancave and Roger in his Barracks, 11 flags for 11 ships, that should keep you both busy. I've kept them deliberately plain looking with no fancy frills and edging,  not sure which one I like the best, but I'd have to go for either the first, second or tenth. I'll be using one of them, one day on my Longship, that is when ever I get my finger out and put the damn thing together and paint it, I've only had it for about 10 years!!!! It's a lovely model from my favourite Vikings, Gripping Beast.
Hope you like the flags and some of you use them!!
Cheers
Ray
Posted by Ray Rousell at 01:15 21 comments: 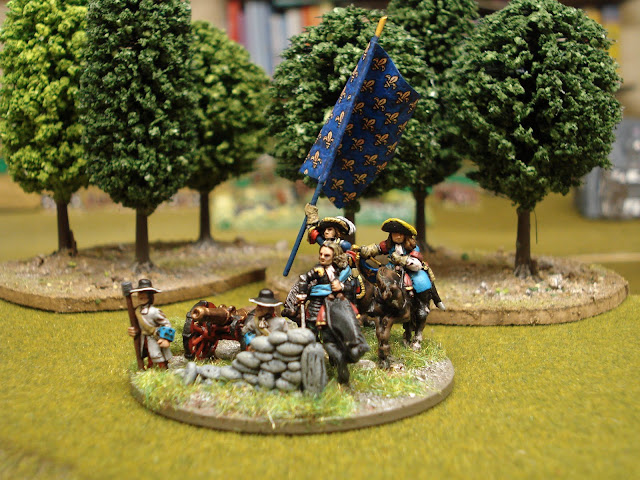 As some of you may know I'm painting up an Allied army for The Nine Years War/War of the Grand Alliance/League of Augsberg, my pal and fellow Reject, Richard is painting up the French army.
Now Richard has come up with every excuse under the sun as to why he's not painted as many units as I have. I believe its just laziness on his part, he he! Not really Rich!!!!
He sent me this photo of his French Command stand, Rich hasn't chosen who this stand represents yet, but  it looks like the Duc de Luxembourg to me!!! I think he's made a grand job of this mini diorama, the figures are a mix, the artillery and artillerymen are from Essex and so are the horses, the riders are the Donnington figures. He's painted up several units both infantry and cavalry already, hopefully I'll post some morw pics of his work at a later date.
Cheers
Ray 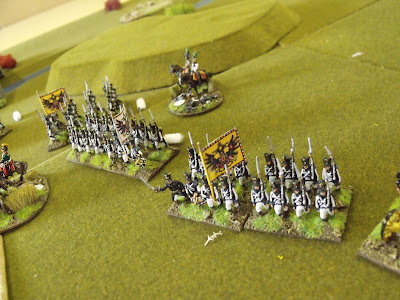 Firstly I'd like to apologise, this is not going to be like my usual Battle Reports, thing is the night before the game I went out on the razzle with a few of my norms, (norms being, my other mates who think grown men playing with little toy soldiers is a little strange). We went to the pub to see our footie team, the Mighty Leeds United, gets their butts kicked 3-1 in the first game of the season, so one thing led to another and before I new it the alarm was going off telling me to get out of bed, the alarm being my two youngest Holly and Nieve jumping on my bladder.
So, not a good start to the day!!! Then the hangover really kicked in, I knew I shouldn't have had that kebab!!
Anyway, I expect some have you have already been on Fran's blog and know the score. I read on Mike's blog that he'd be over in the UK on holiday and invited him to join us at Posties Mancave for a game, he didn't mind what game we played, so Napoleonics were chosen.


On the 13th May 1809 the Austrian capital Vienna surrendered to Napoleon's forces. The Austrian army were still active even after suffering numerous defeats.
Thus the scene is set, two days after the Austrian withdrawal from Wagram (5th/6th July), with the Austrian forces escaping from Napoleon's armies, various Austrian units have been gathered to intercept a small French and Saxon corps from flanking what remains of the Austrian army.
The French are still looking for a fight and by god they will have one!!!
The Austrian army has started to arrive at Pisek, a small town about 120 miles north-west of Vienna, the French are also marching to Pisek looking for a fight.
Orders
French - Defeat one of the last remaining active Austrian forces and win glory for France.
Austrians - Stop the French and win a vitally needed victory against the hated French Empire.