On my workbench at the moment sits a half painted unit for my British army for the Nine Years War. Mackay’s Regiment. I needed a break from painting, my neck was killing me, so I moved onto the units flag, which like most for the period, is not known. I liked the look of the flag used by Barry on the League of Augsburg site, Link it looks like a flag used by the Stuart’s of Atholl in the Jacobite Rebellion of 1745, so I used that idea. For the second flag I used a Scottish saltire white on blue and added a coat of arms for the name Mackey, I think it looks quite effective. But for the total purists among you, it my cause a nosebleed, sorry!


If you want to paint the unit up and have no flag, copy this one with my best wishes.

Hugh Mackay’s regiment was part of the Anglo-Dutch brigade and fought at the following battles: 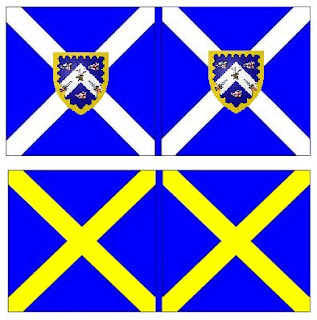 Two years ago my megalomaniac mate Postie bought some of the then new Dixon figures for the Battle of Sedgemoor. As I’m a hard up mug with lots of little BRATS to feed, (all my fault, I know), I agreed to paint up his figures, for a large amount of dosh & a packet of winegums. The job I was in at the time allowed me lots of time to paint, so after around 5 months I’d finished all the figures. I enjoyed painting them, when i first saw them unpainted they didn’t look much of a figure, pretty boring actually, but I was quite surprised and pleased with the final result.

Below are a few photo’s of the some of the Sedgemoor figures. Hope you like them, all comments welcome!!! 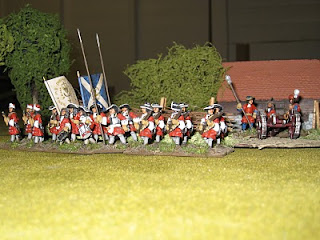 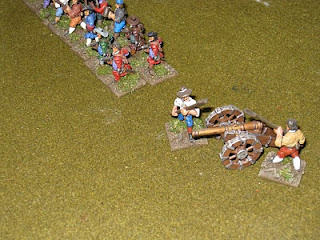 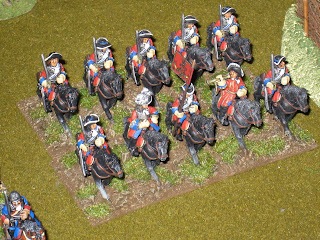 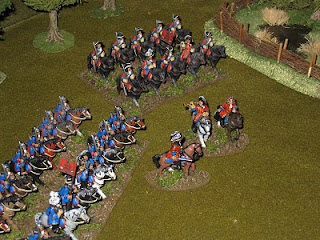 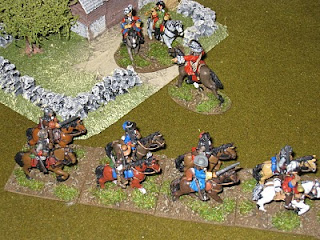 Rebel Lifeguard of Horse
Posted by Ray Rousell at 15:25 20 comments:

Here are some photo's of my growing army of English and their Allies for the Nine Years War. Apologies for the quality of some of the photo's, I've just bought a new camera and am struggling to get to grips with it, where were the kids when I needed them..........
The figures are 15mm Essex and are painted by myself. They're based up for Beneath the Lilly Banners rules. 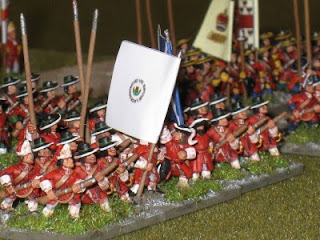 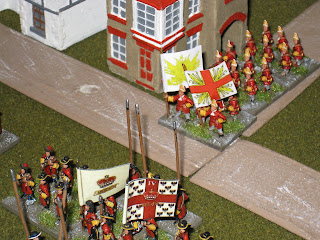 Email ThisBlogThis!Share to TwitterShare to FacebookShare to Pinterest
Labels: 15mm, Beneath the Lilly Banners, League of Augsburg, NYW

I wrote a message on a forum a couple of months ago enquiring if anyone new anything about the flags for 2 English regiments during the Nine Years War.


No!!, was the answer, the only advice I was given was, “As nobody knows what they looked like, why don’t you make them up”. So that’s what I’ve done. For the sticklers among you, look away now, the flags may hurt your eyes and offend your senses. These are my simple versions of the flags and once again if you want them, take them!!

The regiments are Prince George of Hesse-Darmstadt, originally led by Col Philip Babington , who led them at The Boyne, after Prince George they were led by Henry, the Marquis de Rada. They later became the 6th foot.

The second regiment is what was to become the 17th foot, originally led by Soloman Richards, then led by the very English named Sir George St George. Next in quick succession were the leaders John Courthorpe & Sir Matthew Bridges. The flag is made to represent the magnificently named Sir George St George. I’ve included two versions of the flag one white the other grey captains colours, as I’ve found conflicting sources over the colours of the regiments cuffs, which the flags are all based upon. 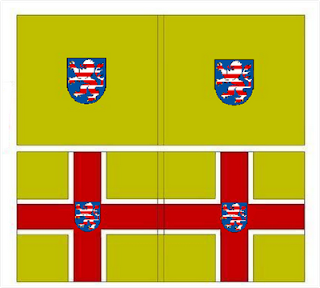 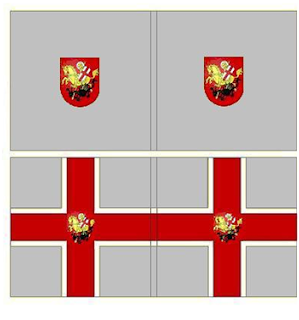 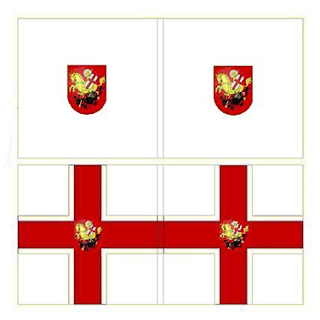 Email ThisBlogThis!Share to TwitterShare to FacebookShare to Pinterest
Labels: Beneath the Lilly Banners, League of Augsburg, NYW flags

Another dip into my files finds another two flags for the Nine Years War period, Sir William Clifton's regiment circa1686. The plain green flag is the Colonels while the other rather snazzy flag is a Captain colour. As far as I have found out this regiment might not be in many peoples armies, as they didn't fight in any major battles, (I could be wrong of course). They were present at Huy in 1994 & Dixmude in 1695, after Clifton they were led by Arthur Herbert Earl of Torrington, Sackville Tufton, Sir James Leslie  who led them at the above 2 locations and finally Emmanual Howe. Then at a later date they became they 15th Foot.
I'm not sure if I'll paint the unit up myself, but it was such a nice looking flag I had to make it.
So once again, help yourself to the flag if you wish. 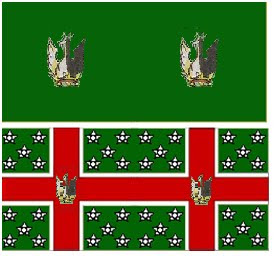 Welcome to my blog and to my first ever post. My blog will mainly consist of posts about Wargaming and Wargame related items. Hope you all enjoy it!!!

Recently on the League of Augsburg site, there were some figures for sale that Barry painted up for the Battle of the Boyne. As there's no info on the three Huguenot regt's that fought he made up some flags, so I thought I'd have a go too. The flags are LeCaillemotte regiment in blue, de Meloniere regiment  in black & du Cambon regiment in green. They're not the best flags you'll ever see, but feel free to copy them if you want. 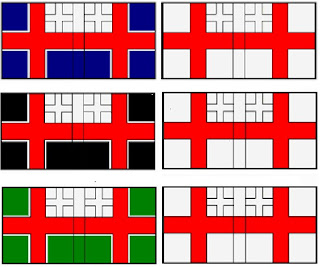 I have made some other flags that are not commercially available for the period that I'll post at a later date.
Posted by Ray Rousell at 12:52 8 comments: