Scots flags for the Battle of Flodden

Both of the first two flags belong to Lord Robert Keith, Master of Marischal who was born in 1483 in Scotland. He married Lady Elizabeth Douglas some time before January 8 1505.
Lord Keith was involved in the Battle of Flodden, in 1513. There seems to be a little confusion as to whether or not he was killed at the battle.
I think you can all guess the third flag!


The last flag is for William Graham, Earl of Montrose, He accompanied James IV on his invasion of England in 1513 and was killed at the Battle of Flodden on 9 September 1513, together with his brother, George Graham of Callendar, and his brother-in-law, Sir William Edmonstone of Duntreath. 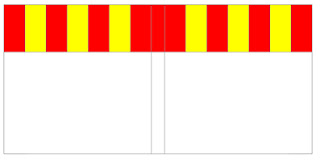 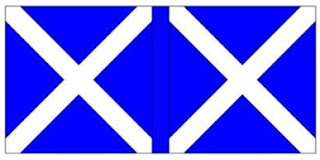 Lord Sir Henry Scrope, 7th Scrope of Bolton fought at The Battle of Flodden commanding the Swaledale and Wensleydale contingents.

On horseback, who had not his peer

No Englishman Scots more did doubt,

With him did wend all Wensleydale'

From Morton unto Moisdale Moor;

All they that dwelt by the banks of the Swale,

With him were bent in harness stour,

From Weresdale warlike wights did wend,

And all to Kidton causeway cold,

And all from Mask and Midleconby;

And all that climb the mountains cam,

Whose crown from frost is seldom free,

With lusty lads and large of length,

which dwelt at Semerwater side,

All Richmondshire, its total length,

The lusty Scroop did lead and guide.
Posted by Ray Rousell at 17:17 2 comments:

Battle of the Spurs - Duke of Buckingham and Lord Bergavenny

Two more flags for the Battle of the Spurs, in 1513, this time we have standards for Edward Stafford, the 3rd Duke of Buckingham and George Nevill the 3rd Lord (A)Bergavenny.
From June to October 1513 Buckingham was a captain in the English army in France, serving with five hundred men in the 'middle ward.'
In the expedition into France of 1513 Bergavenny took a prominent part. From June to October he was a captain, or rather general, in the king's army, and landed at Calais on 30 June. He filled the same position from May to August in 1514, and he was rewarded in 1515 by the grant of the keepership of Ashdown Forest.
I've added another flag to this post, I was advised that the flag of Lord Bergavenny was wrong. The flag below is not an exact copy of the flag shown on, www.college-of-arms.gov.uk/Newsletter/022.htm, but it keep in with the size and style of the flags I've already made. So If anyone finds any mistakes or can point me in the right direction I'd appreciate it.

Email ThisBlogThis!Share to TwitterShare to FacebookShare to Pinterest
Labels: 1513, Battle of the Spurs, flags, Flodden flags

Marquess of Dorset' s Flags for The Battle of the Spurs

In 1512, Thomas Grey, the 2nd Marquess of Dorset led an unsuccessful English military expedition to France to reconquer Aquitaine, which England had lost during the Hundred Years' War. Ferdinand of Aragon gave none of the support he had promised. While Ferdinand delayed and tried to persuade Dorset to help him to attack Navarre instead of Aquitaine, the English army's food, beer, and pay ran out, many took to wine and became ill, and the army mutinied. Back in England, Dorset had to face a trial.
In 1513, he fought at the siege of Tournai and the Battle of Guinegate (also known as the Battle of the Spurs), and fought again in 1523 in the Scottish borders. These all gave him chances to make amends for the debacle of Aquitaine. To help Dorset in dealing with the Scots, he was appointed Lord Warden of the Marches, restored to the Privy Council, and became a gentleman of the chamber.

Email ThisBlogThis!Share to TwitterShare to FacebookShare to Pinterest
Labels: 1513, Battle of the Spurs, flags, Flodden flags

Earl of Northumberland's flags - The Battle of the Spurs 1513

Henry Percy, The 5th Earl of Northumberland﻿ fought for Henry VIII in the  War of the League of Cambrai (1508–1516) and at the Battle of the Spurs in 1513. The first flag is from the War of the Roses, so it may not be 100% correct, the second flag is taken from the front cover of Osprey's, "Henry VIII's Army", Men-At-Arms No191. If its good enough for Osprey, its good enough for me!!

Lord Dacre's flags at the Battle of Flodden

Two more flags for the English at the Battle fo Flodden. They both belong to Lord Darce, the warden of the English West March. At the battle Lord Dacre commanded the right flank of the English army, his command contained approx 1,800 foot and upto 2000 Border horse, including a troop commanded by the notorious Bastard Heron!

Sir Marmaduke Constable's Flags at the Battle of Flodden

Sir Marmaduke Constable fought at the Battle of Flodden, on the left flank of the vanguard commanded by Thomas Howard, The Lord Admiral. He was in in 70's at the battle, the only descriptions of his flags, I've found are from the War of the Roses, so being a septenagarian he should still have the same flags. Hopefully! 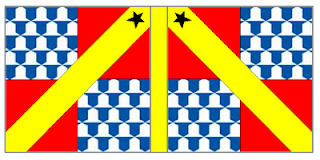 Three more Viking flags for you, at a request from Norm on WD3, we've got a few more Raven banners. The first two use the same Raven shape but the colours have been inverted on each one, the last flag is a copy of a flag from a previous post, with added tails for the flag. Hope you like them!!! Comments welcome and appreciated. 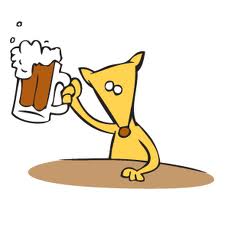 A big Thank you everyone who's visited my blog in the last few months, My first milestone is now complete, I've passed the 10,000 visitors mark on my blog, only another 9981 to go to the next one!!
Posted by Ray Rousell at 14:17 4 comments:

Email ThisBlogThis!Share to TwitterShare to FacebookShare to Pinterest
Labels: Milestones

I've made another two more Viking flags, the first is a Raven banner, no Viking army should be without one, the second contains a mythical beast design. Hope you like them, comments welcome good or bad!!

I had a comment on my blog today, from a fellow blogger Tas, admiring the Battle of Flodden flags I've been making, he enquired if I had any Viking flags since I had a Viking army. The simple answer was no! As I'm sure my fellow club members will tell you, they've not seen the light of day for far to long. So after a little fiddling on the PC I came up with the two flags below. Hope you like them, and use them as you will!!

Four more flags for the English army for the Battle of Flodden in 1513.
The first is for Christopher Savage's unit. Savage was the Mayor of Macclesfield and was slaughtered along with his contingent at Flodden.The Scots captured his flag.
The second flag is for Sir Edward Stanley's contingent which was on the extreme left of the English army. The next flag is for Henry Grey's contingent and was also captured at Flodden by the Scots.
The last flag is The Banner of St Cuthbert, which was carried by the Durham companies in the Lord Admiral's battle. 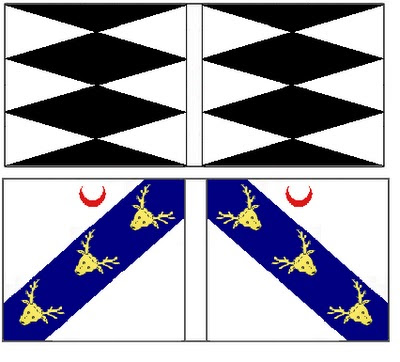 There are four flags in this post, the first is again from Stuarts blog, and is the banner of Henry VIII, while the second is another Tudor livery flag﻿. 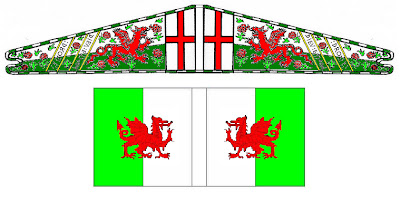 The next two flags are both for Rhys ap Thomas, who commanded the Light Cavalry at The Battle of the Spurs, during the European campaign in 1513.

Once again, feel free to copy and use the flags in your own armies.

I've been busy colouring more flags using the templates from Stuarts blog, Link . The first two are both Tudor Livery banners, the next two are both variants of St George's Flag, while the fifth flag is for George Neville, 3rd Lord of Bregavenny. The last flag is a generic Burgundian cross, for the Landsknecht's in Henry VIII's service. Stuart suggested painting this flag with a yellow saltire upon either a red or blue background. I've chosen to keep the body of the flag white with a brown or wooden cross.
Once again, feel free to copy the flags for your own use, save them to your PC, then open them with Word to resize for 15mm or 25mm 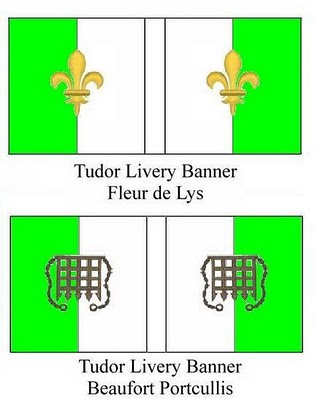 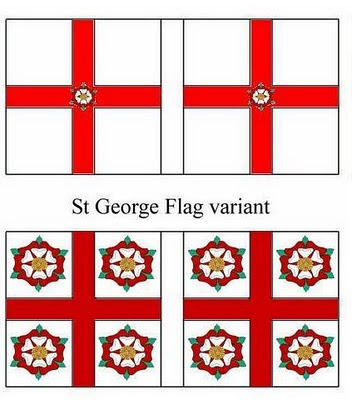 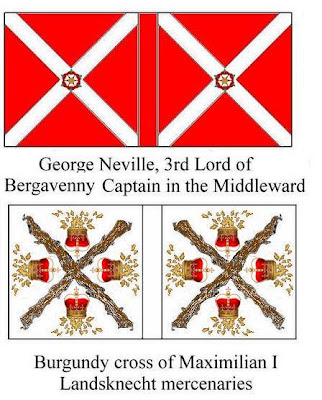 Following a link from TMP last month, I visited the blog, "Stuart's Workbench", Link. Stuart is in the middle of painting up an army for, Henry VIII's campaign in France in 1513. He's kindly decided to share some line drawings of flags and standards for Henry's army. The problem for me is, it has re-ignited my passions for my long abandoned project of the Battle of Flodden in 15mm. Stuart gave me permission to copy the flags and colour them, then place them on my blog. I've included 4 here, as well as 4 Scots flags for Flodden.

The first flag is a Tudor Livery Flag. The second is The Royal Coat of Arms. 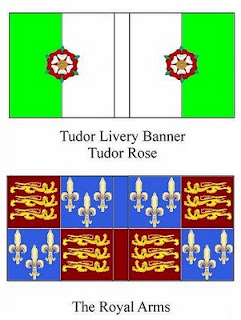 The third flag is Edward Stafford, 3rd Duke of Buckingham, while the fourth is The Holy Trinity. 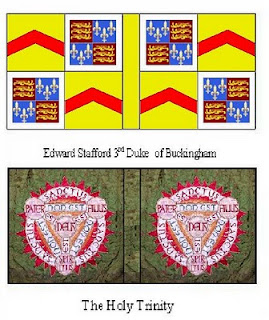 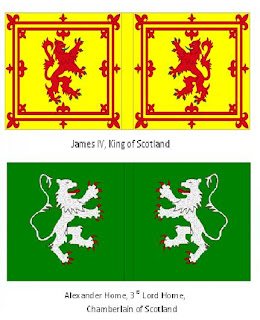 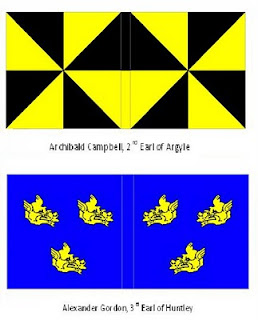 I shall be placing more flags for the Tudor period over the coming weeks, so please come back and check them out.