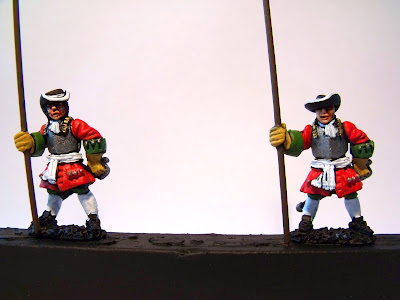 Some of you may already know the name of Postie.
He is the Titular leader of The Rejects.
He is also a git!

Several years ago I painted up stacks of 25mm Dixon figures for the Battle of Sedgemoor, for the man himself. Postie sorted the regts out in a ratio, so every unit had a different number of figures, at the time he didn't know what set of rules he would use, here's a link to some of the figures I previously posted.
Now comes the Git part......the figures have actually never made it out for a game, so a couple of months ago Postie decided to sell them, I tried to talk him out of it, but as usually he wouldn't listen. He even tried to get me to buy them, now I would have loved them, but  I was already well into my 15mm armies for the NYW, and I didn't have the £1800 he wanted for them as well as the look the Mrs gave me when she overheard me and Postie chatting about it. I decided that I wanted my nuts to stay in the sack, I thought better of it!
Anyway I very stupidly said to Postie, "Why don't you re-base the figures for Beneath the lily Banners Rules?" This got Posties interest as he'd played a couple of games in 15mm and liked the rules. He ummed and arred for a few days and said, no because he'd have to paint more figures for each unit blah, blah, blah, then all of a sudden somehow I'd agreed to paint all the bloody figures up for him for nothing???? I'm still trying to work out how he did it? Did he put something in my cuppa tea, was it really cheese in the sandwich, or has he really got Supernatural powers? I still haven't worked it out?

Anyway I've painted up all the extra figures for the cavarly for both sides, which was around 20 odd figures and now its Infantry time. Here are a few pics of The Queen Dowagers regt, otherwise known as Kirke's Lambs. 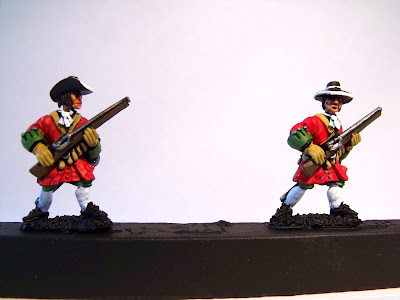 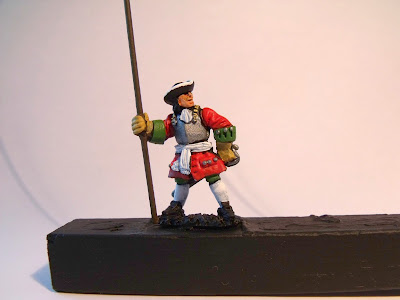 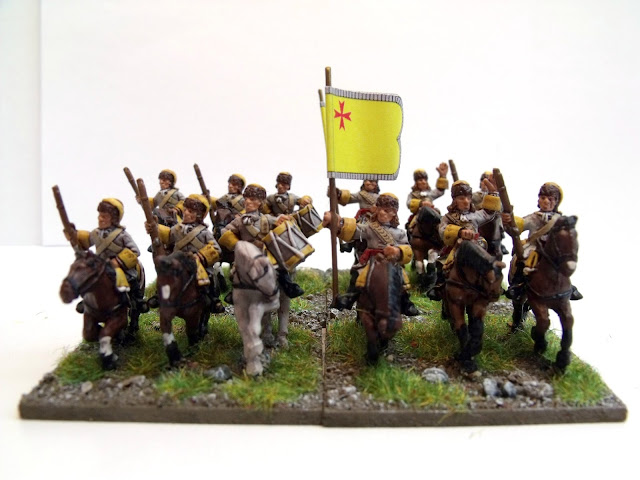 First day back to work, I'm knackered, stayed up far too late playing Call of Duty last night, then up at 4 o'clock, I'm not getting any younger!!!! Fran's his normal happy-go-lucky self! He says his given up painting silly bloody figures and he wants me to paint more of his crap!! Been playing poker on Facebook and had a Maccy D's breakfast wrap so I feel a little more human now.............anyway.........

Lord Clare's Dragoons
A leading supporter of King James in, County Clare was Daniel O’Brien, 3rd Lord Clare, who lived in Carrigaholt Castle. In January 1689, Lord Clare seized Clare Castle. On his orders the Protestant men of military age were rounded up and imprisoned in the castle, since their loyalty to King James could not be counted on.

However not all Ireland supported King James; the Protestants of Ulster supported William of Orange. It was clear war would have to be fought to decide who would eventually own the land and thus the wealth of Ireland. To help with the war effort a three monthly tax of £1,798 was levied on County Clare. A Cavalry regiment known as Clare Dragoons was established. They were called dragoons because it was thought the smoke rising from their muskets resembled dragons. A supply of good horses was essential for this regiment, so an order was issued for the seizure of all horses in the county for the service of the king.

The hastily recruited dragoons had little experience of fighting and so did poorly in battle. The regiment was sent north to help with the siege of Derry in July 1689. They were drawn into an ambush at a narrow pass in Lisnaskea, Co. Fermanagh and cut to pieces and routed by a superior force.
Clare’s Dragoons were disbanded and the troops placed into other units. A year later the unit was reorganized and participated in the Battle of the Boyne as one of two regiments of King James’ cavalry that is said to have performed poorly.
Upon defeat at the Boyne in 1691, Lord Clare was outlawed and his estates in Clare forfeited to the Crown. He died later that year .
The figures are from Essex and are actually French Dragoons, there is no information about their uniform other than being known as the Yellow Dragoons, whether that meant coat colour, cuff colour or even flag colour, I don't know, so I've gone for a grey coat cuffed yellow, with yellow banners. 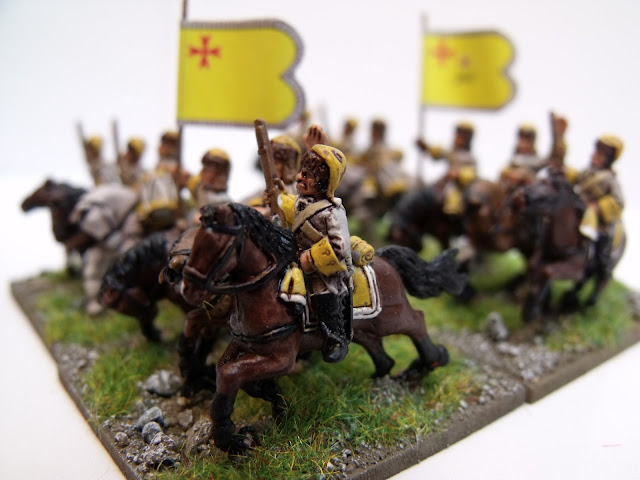 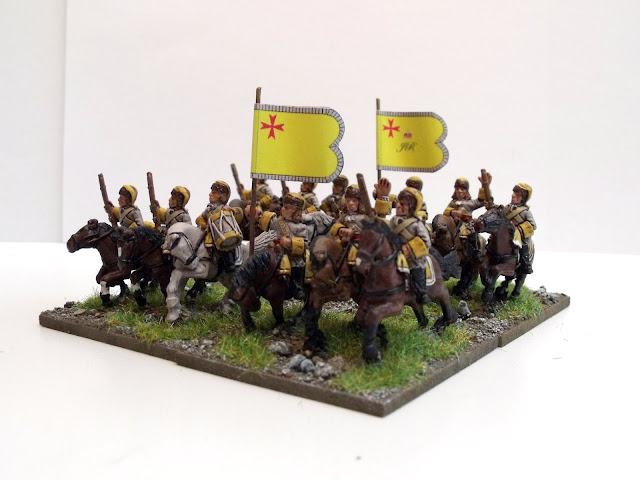 Battle at the Bridge a BLB2 batrep 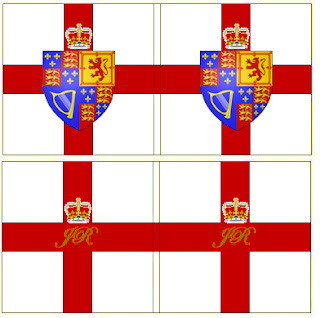 Here's some flags I made up for King James's Foot Guard, I included some that I didn't use for my units, but you may find them useful.....or you may not! 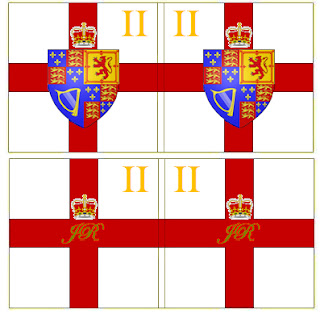 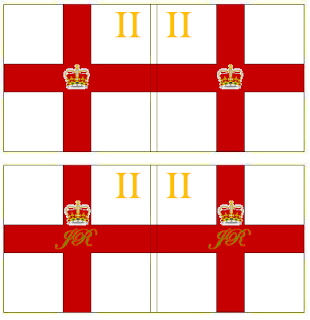 Email ThisBlogThis!Share to TwitterShare to FacebookShare to Pinterest
Labels: Battle of the Boyne, Beneath the Lilly Banners, Grand Alliance, NYW, NYW flags 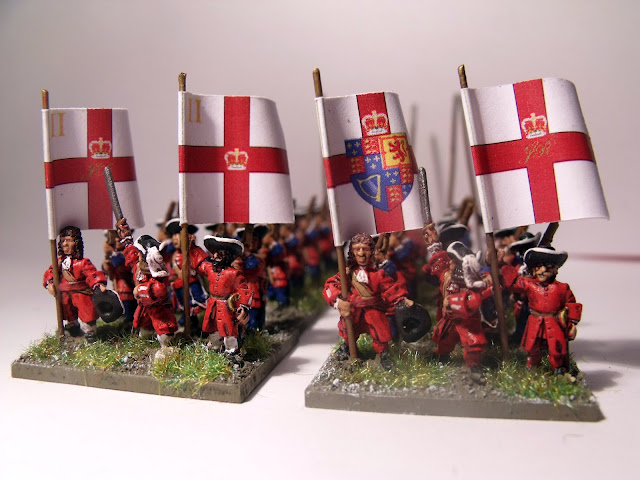 My first post in a week!! So I though i was about time I bored you all to tears with another of my recently painted units, but in the case it's 2 units! The 1st and 2nd battalions of King James' Footguards.

In 1688 King James transferred 3 regts of foot to England from Ireland. The Duke of Tyconnell raised three new regt’s to replace them, one being, the Guards. The original commander of the unit was the 2nd Duke of Ormond , but in 1688 he declared his allegiance to William III so the command went over to Englishman William Dorrington. They fought at Derry, The Boyne and at Aughrim, where Dorrington was taken prisoner.

Under the terms of the Treaty of Limerick, in 1691, which ended the war in Ireland, a force of 20,000 Jacobite’s arrived to France, in an event known as the "Flight of the Wild Geese". These men were kept separate from other Irish regts, and were formed into King James’ own army in exile, albeit in the pay of France. Lord Dorrington’s foot, Later Roth’s or Rooth’s, were formed from what remanded of the 1st and 2nd battalions of King James’ Roayl Irish Footguards. 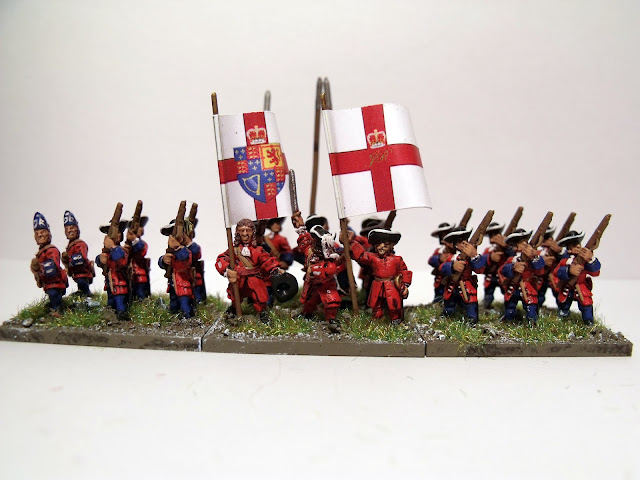 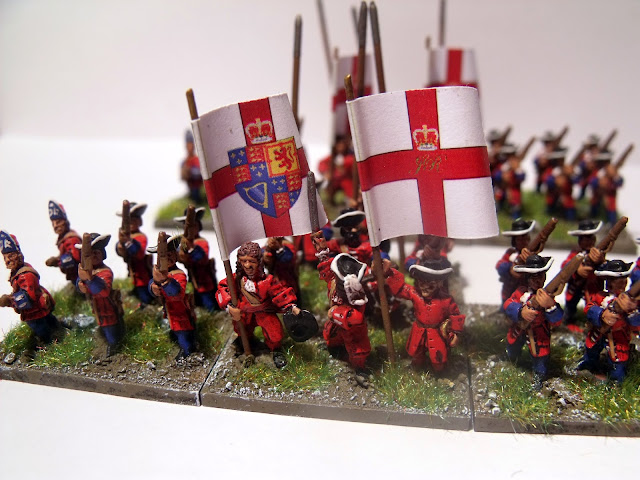 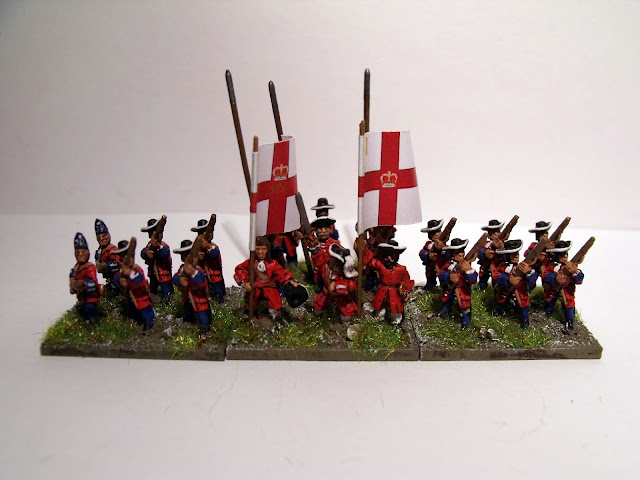 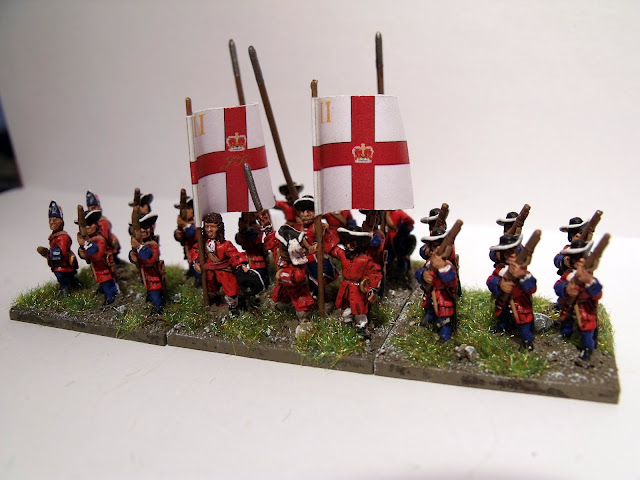 
Earlier this month Michael Awdry was lucky enough ( well maybe??) to win my 250,000 Giveaway competition here.  he won the chance for me to paint up some free figures for him. Well the figures arrived last week and today I've painted them up tod
I must admit that I wasn't quite sure what they were at first but a quick look at Micheal's Victorian Warfare,  post and I was well on my way!


Here are the 5 Botocudo Indian figures before and after painting, Micheal's going to base them up himself to match in with his figures, so look out for them there in a couple of weeks!!! 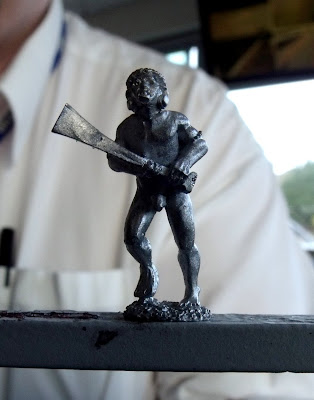 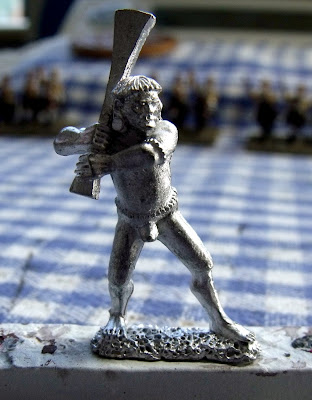 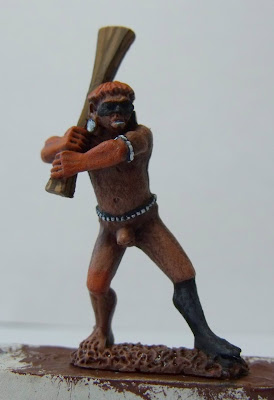 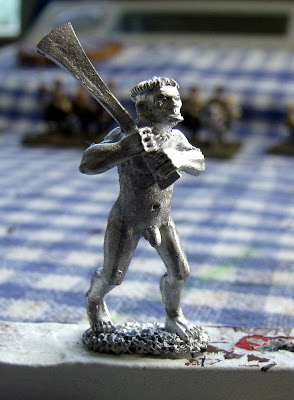 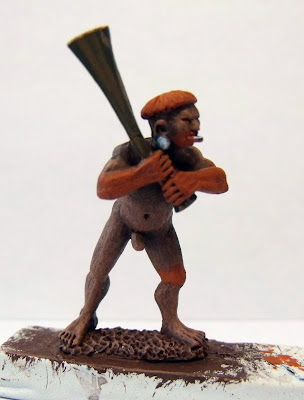 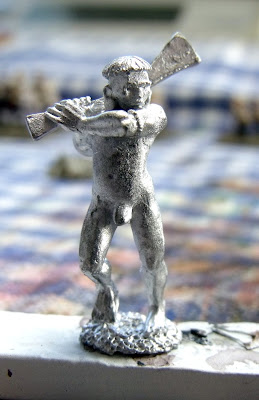 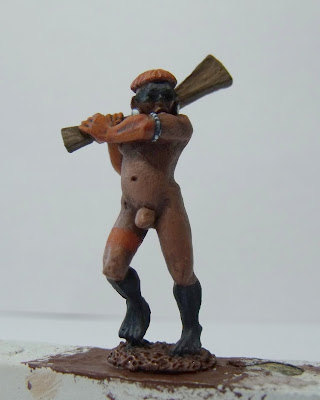 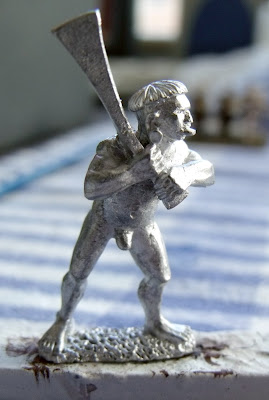