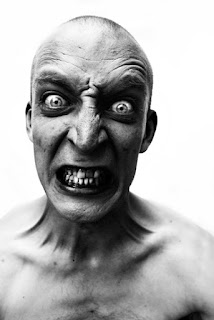 As you may be aware some of the Rejects went along to Cavalier Wargame show in Tonbridge on Sunday, I was going to post some pics of the games at the show today, but that'll have to wait, I need to get these three words off my chest first.

Once again as some of you know myself and fellow Reject, Postie, have been painting up figures to sell for our little adventure otherwise known as Battleaxe Painting Service. We've sold various figures on ebay, but thought we'd try our luck at a bring and buy.
Now if your a regular at UK shows, you'll have noticed that the bring and buys have been getting worse and worse each year, we've always put it down to the internet and eBay  Why bother to take your figures to a bring and buy when you can flog them on ebay???
We took 10 units to sell and only sold 4, I've got to admit I thought, ok hoped?,  they'd all sell obviously, perhaps we overpriced them, I don't think so though, more like under priced them, perhaps people just don't have the money to spend on painted figures?
But on Sunday we found the main reason why bring and buys are full of other gamers crap, with hardly a decent figure or bargain in sight.

Just before  the end of the show, me and Postie, happily went to collect our dosh and figures that didn't sell and found out that some shitbag had stolen one of our units. The unit in question were a 25mm Napoleonic unit, the 5th/60th Royal American Rifles, sorry no pics!! There were 12 figures, up for a very reasonable £40, but quite obviously £40 was far too much for the $£^&!* who stole them.
I do hope he's very happy with them. I would very much like to meet this fine fellow and shake his hand!!

I was also quite miffed with the chap on the bring and buy, who wouldn't even look me in the eye and kept his head down, I know it wasn't his fault what had happened, but when he asked me to sign the bottom of the form if I was happy with the sale, I had to stop myself from screwing the form up and stuffing it somewhere!!!!! There was no apology, just a " Well if they turn up, we've got your mobile number" Yeh right!!!!!
No wonder there was a "TWWS accepts no liability for loss or damage of items" clause on the form, they'd probably end up owing more than they made.
Fran said he'd seen one other poor sap running up and down the bring and buy looking for his missing item, just before me and Postie came in,  I just wonder how much other stuff went missing during the day and at other wargames shows?
Well it was a hard lesson to learn, but I'll never again try and sell anything else at a bring and buy again!!