RP No118 Williamite Horse at Killiecrankie 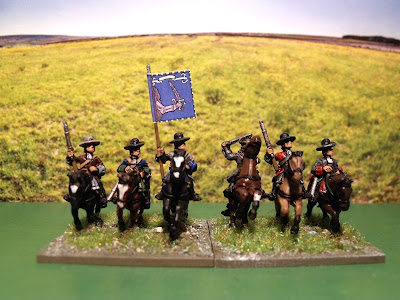 Back to Bonnie Scotland again, but a few years after the last post.
There wasn't a lot a cavalry at the Battle of Killiecrankie, infact there were only 3 units, one on the Jacobite side and two on the Williamite side. I say units with a pinch of salt, because both the Williamite units numbers combined added up to110 men.
The first troop made up of approx 60 men were raised on 22nd April 1689 in Larnark, Stirling and Clackmannan by John Hamilton 2nd Earl of Belhaven and Stenton. There is no info on what they wore, so with a little help from the League of Augsburg's Fighting Talk Forum, I decided to paint them in civilian dress. 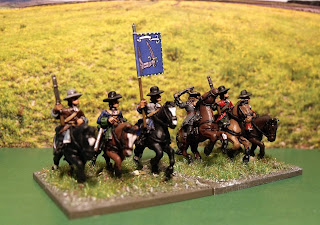 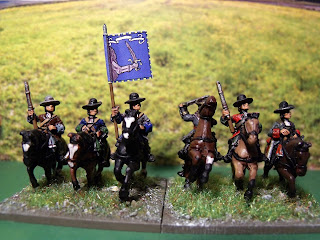 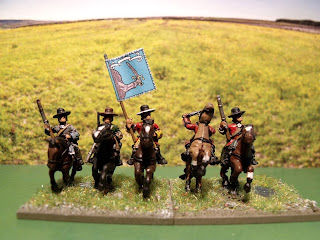 The second troop, were raised by William Johnstone, the Earl of Annandale, they were also raised on the 22nd April but in Ayr and Renfrew. At Killiecrankie they were led by Annandale's lieutenant, William Lockhart of Cleghorn. There's a little confusion as to whether they were uniformed at the time of the battle, Annandale entered into a contract with the New Mills Cloth manufactures, for "their coats lined with Aberdaines fingarrins, (a fine cloth) dyed red" But they may not have recived the uniforms until after the battle, so I've given some of the figures red, while the rest are in civilian dress.
At the battle there were only 50 men in the troop, so this unit has only 5 figures.

I wasn't too sure whether or not to give the two units flags or not or even if they were issued with flags in the first place, so I decided to give them an old hand me down flag from the ECW, which was kindly given to us bloggers by the Dux himself on his blog Dux Homunculorum, I copied the flag and changed the colours, but for some unknown reason chose the original dark blue for the first unit, then I let his nibs chose one, he chose the light blue, so there you go!!

Both troops performed exquisitely on the battlefield, routing as soon as the Highlanders charged, unfortunately for the Williamite's they routed straight through the centre of their lines causing other units to turn tail and run.
These troops were entered into Curt's Challenge and earned me 46 points, keeping me at No 8 on the board. 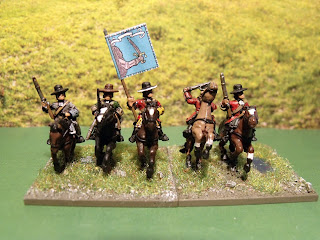 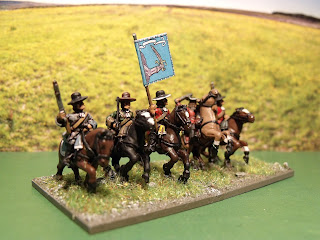 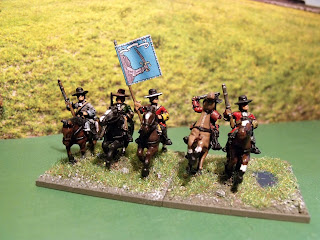