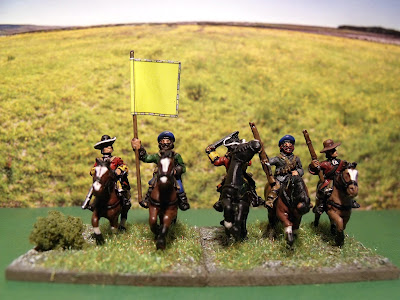 The only regt of Horse, (that is if you can call 40 actual men a regt of Horse), that were present on the Jacobite side during the Battle of Killiecrankie.
The unit were made up from two separate entities, firstly the remnants of Dundee's own regt, The Royal Regiment of Horse, which was raised in December 1682 and disbanded on 1st April 1689, they originally wore red coats lined white, but in December 1685 this was changed to red coats lined yellow along with a change of name, they became "His Majesty's Own Regt of Horse", but seem to have still used their old name. Added to Dundee's small remnant of Horse were some volunteer cavalrymen led by the Earl of Dunfermline, who wore civilian dress, hence the three non red coated figures in the unit. Dunfermline was supposed to be given command of the Horse but at the last minute Sir William Wallace of Craigie revealed he had a commission from King James, to lead the unit, after all he had held a commission in the Royal Regt of Horse and commanded a troop since 1687.
During the Battle, Dundee seeing the Williamite Horse advancing moved the horse up, this was too much for the Williamite Horse, seeing not only the Highlanders charging downhill, but now Cavalry as well, they turned tail and fled.
The figures are all from Essex minis, the red coats were a few left over figures from their NYW range, while the bonnet wearing Scots are from their Renaissance range. As for the flag, I'm not even sure they carried one? But I've given them a plain yellow flag anyway, that could/might have been used by the Royal regt of Horse when they were still active. 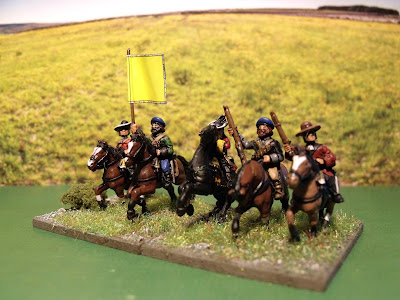 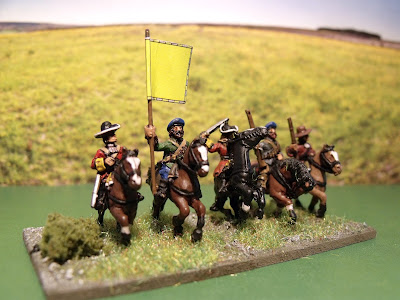 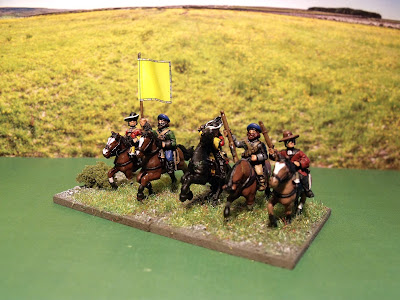