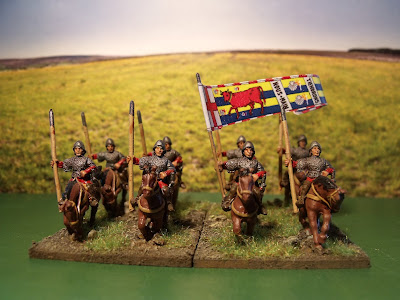 One of 4 units of English Border Horse, I've recently painted up for the Battle of Flodden in 1513. The figures are from Essex Minis and are carrying the Banner of Thomas Lord Dacre 2nd Baron of Gilsland, Warden of the English West March. The flag was drawn by myself on MS Paint and is available here to download for free.


This unit plus the three others earned me 136 points in Curt's Analogue Painting Challenge.

An account of the Battle, by James Bell
"On James IV's left flank The Border Pikes under Lord Home, broke ranks and charged the English right wing, commanded by Edmund Howard. Howard's forces were outnumbered in this attack by three to one and totally unnerved by the attacking Pikes of Home, panicked and ran, leaving Howard with a few loyal men standing their ground. Howard put up a desperate but losing fight and although his standard bearer was dead and he had been downed three times, he managed to regain his feet each time and continue his struggle. Just as Home's Pikes were about to charge him yet again, no doubt with a borderers eye to the ransom, 1,500 of Lord Dacres Border Lances (made up of his men from Gilsland and  Bell's of Farlam), charged the Scottish flank and held them. Then a handpicked band of Border Reivers under the outlaw John "The Bastard" Heron, hacked their way through the Scots around Howard and freed him. Heron's Reivers "making even work before them" cut their way through the Scots towards the English ranks; on the way they were confronted by a party of Scots lead by the young Sir David Home, who was cut down and killed by Howard." 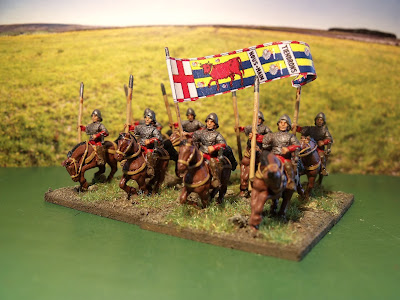 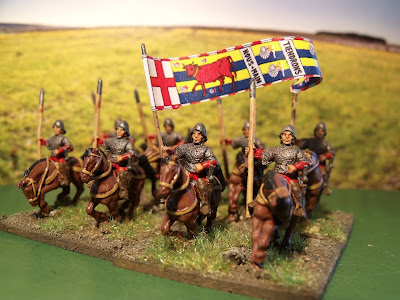