The Battle of Boars Back - A Napoleonic batrep 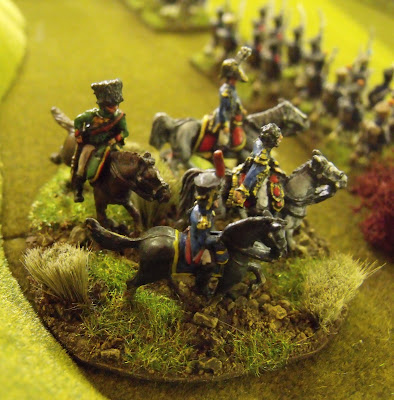 The Battle of Boars Back 1813 A Fictional batrep

Wellington has been pushing the French back towards the Pyrenees, the French Commander Marshal Rousell has been given the task to hold the advancing British led by Col Lee at a large hill named Boars Back, just 1 mile from the French border.
The French second in command was Col Biglee, while the British second in command was the newly instated Lt Col Diggery. Although halfway through the battle Lt Col Diggery trod on a pebble and had to be replaced by the newly commissioned Ensign Jack.

Postie literally brought the curtain down, which he hasn't done for a long time. I'll explain, high above the middle of the table we have a curtain, which when lowered cuts the table in half, this is great for Fog of War, as you haven't a clue what troops you face, where they are deployed or even what the terrain looks like!!!!

I took stacks of pics for this game, so I thought I'd try a pictorial batrep for a change?? Hope you like it!!