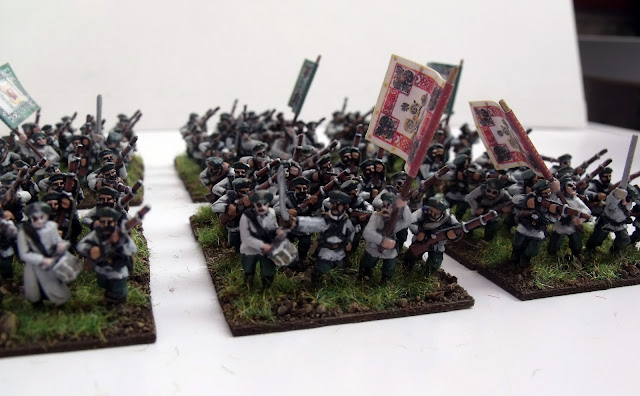 This fine lot of troops were entered into the Analouge Painting Challenge in mid March, netting me 1152 points, getting me into reaching distance of Sir Kent. The figures represent two East Siberian Rifle Division's, the 1st and the 9th. Both the Divisions fought in many of the major battles of the Russo-Japanese War. The figures are mainly from Old Glory, with a few Irregular thrown in for good measure.
I was accused of sandbagging:
"Sandbagging: in billiards and other games, deliberately playing below one's actual ability in order to fool opponents into accepting higher stakes bets, or to lower one's competitive rating in order to play in a future event with a higher handicap and consequently have a better chance to win.

Which, was of course absolutely correct!!!

These have since joined the masses in Posties collection, locked away until he sorts the rules out!!!