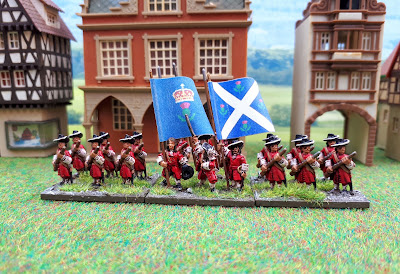 Posties Rejects will be putting a game on at Milton Hundred's wargame show "Broadside" in Sittingborne on 9th June. Its my turn again to host the game, I was going to do a Donnybrook extravaganza, with loads of the figures I painted up during the Challenge.  But there's not enough room to do the battle I wanted to do on a 6x4 table.
So I switched scales back down to 15mm and I will be using Beneath the Lily Banners "The War of the Three Kings" rules. We've had a few practice games and ironed out a few bits, now I've just got to try and learn them off by heart, trouble is, I'm 51 and already have a mind full of mostly useless info. Trying to pack in all the changes to BLB is proving rather difficult!!
I needs some oily fish me thinks!!!
Anyway, I needed a few units for this said 15mm battle, I did consider just painting up the command stands and using other already painted units, But I knew in my heart that this would bug the crap out of me. So I've painted them up, the figures from Essex were destined to be French re-inforcements, but instead of the grey they now wear red. 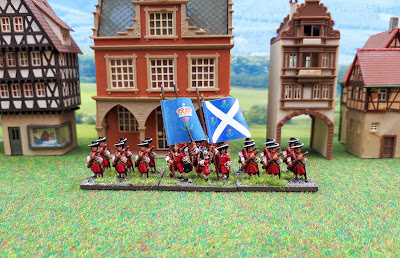 These fine looking fellows are Ramsay's regiment, who were raised in 1675 by Alexander Colyear and were one of the three Scottish regiments who were in Dutch service. They defended the lines at the Siege of  Maastrich in 1676. Colyear died in 1680 and commanded was handed over to James Douglas the then Lieutenant -Colonel. John Wauchope then became Colonel in 1685. He obeyed King James VII's summons to return to Scotland in 1688 as the country moved into the Glorious Revolution. King William removed Wauchope from command which passed onto George Ramsay. 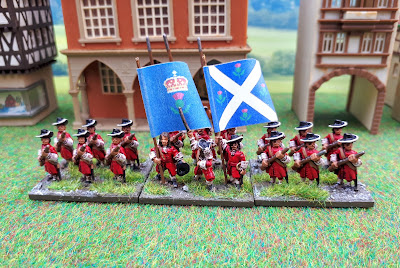 On 27th July 1689, Ramsay's regt fought in the English loss at the Battle of Killicrankie, half the regiment held fast against the Highlander charge, while the other half fled before the Highlanders made contact. In 1691 Ramsay was promoted to Colonel of the Scots Guards, so commanded was given to Sir Charles Graham. In August 1692 they fought at the Battle of  Steenkirke, where Graham was wounded. 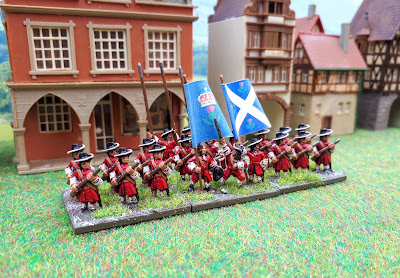 In 1694 Graham's regt and another 8 regiments were ordered to hold Dixmude, while other allies besiged Namur. Dixmude was under the command of Major-General Ellenberg and were expected to hold out for at least 8 days. But they surrendered after onlt 2 days, with 4,046 soldiers being taken prisoner. This raised suspicions of bribery and mental weakness.
At Gent a Court Martial was held, both Ellenberg and Graham were found guilty. Graham was dissmissed from service while Ellenberg was executed!!

The regiment then went full circle in 1695 with the son of their founder Alexander Colyear, Walter Philip Colyear taking over command 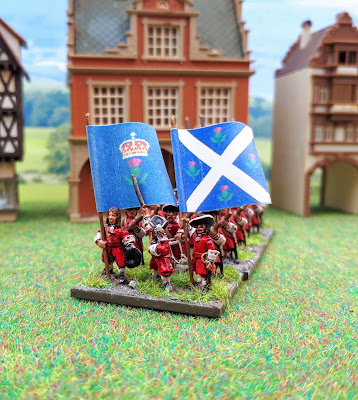 The flags are mine, made many moons ago, there are now several versions of Ramsay's available to buy, most, including those by Warfare Miniatures don't look like my versions at all, but hey ho they'll do for me.!

More from the Scots Brigade in the next post.