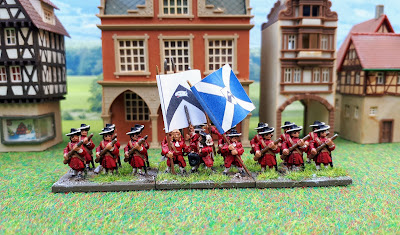 The second newly painted unit for Beneath the Lily Banners "War of Three Kings" and the second regt form the Scots Brigade.
Barthold Balfours regt were raised in  1603 by the Duke of Buccleugh for Dutch service.
Jumping forward to 1672, they were commanded by John Kirckpatrick, At the start of the Franco-Dutch War they were garrisoned in Maastricht, defending the siege lines there in 1673. Also fighting at Grave 1674, Maastricht again in 1676, Cassel 1677 ans St Denis in 1678.

In 1684 Barthold Balfour became the Colonel. James II ordered them home on account of the Monmouth rebellion, they along with Mackay's and Ramsay's arriving in Gravesend (my hometown) on 30th June 1685. They arrived too late for the Battle of Sedgemoor, so were sent back to the United Provinces unbloodied.
They crossed the channel once again in 1688, were they were transferred form the Dutch establishment to the English. 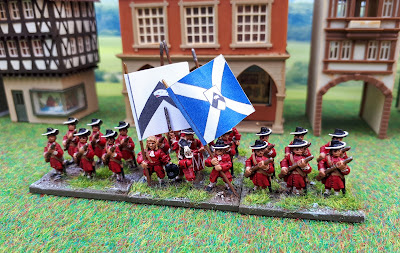 The next year they fought on the left of the English lines at the Battle of Killicrankie. Their Lt-Col George Lauder was sent off to command a Fuzileer/Grenadier detachment on the extreme flank of their lines. Its not actually known what went wrong at Killicrankie with Balfour's regt. its written that they didn't even fire a shot at the Highlanders before all turning tail and running. In the turmoil of their retreat Balfour was cornered by the Highlanders and skewered to a tree! 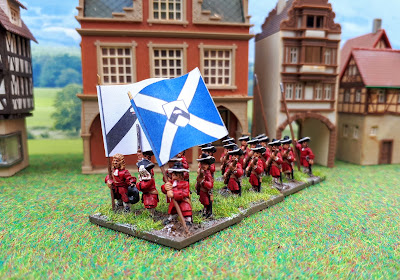 With the death of Balfour, the Colonelcy was given to George Lauder who only just escaped death himself at Killicrankie. In 1692 they fought at Steenkirke, 1693 at Neerwinden and finally covered the Siege of Namur in 1695. 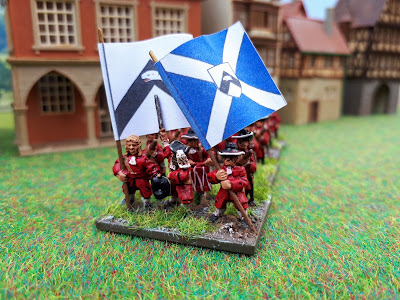 In October 1696 the ' Lawder' regiment is still on the list of troops to be maintained by William III. Somewhere in late 1697 or in 1698 the regiment was then returned to the United Provinces. In 1699 it was designated to garrison Bergen op Zoom. 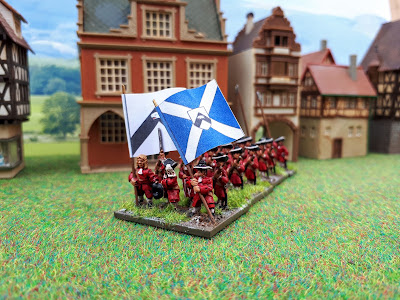 Email ThisBlogThis!Share to TwitterShare to FacebookShare to Pinterest
Labels: 15mm, Beneath the Lilly Banners, Killiecrankie, League of Augsburg, NYW