Beneath the Lily Banners 2 a short review 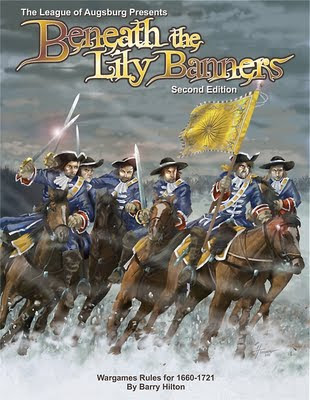 Earlier in the month I pre-ordered Beneath the Lily Banners second edition, by Barry Hilton from The League of Augsburg's shop it duly arrived the day after posting, and very impressive it is too!

Beneath the Lily Banners is a tabletop wargaming rule system designed to give players a real flavour for the tactics and troops used in Europe during the period 1660-1721. The game play is simple and quick to master. The mechanics are based on simultaneous movement regulated by easy to understand orders. The game can be played in 28mm or 15mm scale. 6-8 units per side will give two or three hours of fun. The rules will easily accommodate 100 units per side for grand battle scenarios. The 2nd edition has many refined mechanisms for orders, shooting, close combat and morale. The book has an updated events section with 52 "playing card" controlled events to add challenges and entertainment to the game play. The rules contain supplementary chapters for gaming the Great Northern Wars, Eastern Wars against the Ottoman Empire and King William's war in North America 1689-1690.

The book contain several uniform guides for the English, Dutch, Danes, French, Irish and Swedes. These guides as I'm sure some of you already know come in the form of painted figures by painters, Pat Conner, Clarence Harrison, Dave Imrie and Brian Philips. Also included are a short painting guide from these fine fellows.
Barry has included 5 army lists, the French Army 1688-1697, the French Army 1688-1697 Expansion, the Grand Alliance 1688-1697, Williamite Army of Scotland 1689 and Swedish 1709. I'm painting up a 15mm Grand Alliance army and now need to get my finger or paintbrush to be precise and get some more cavalry painted!
The book is full is photo's of extremely well painted figures, which is enough to make any gamers mouth water and personally make me feel quite inadequate with a brush.
Another great item in the book is the scenario, "Steinbeke, July 1692", which contains an order of battle and a reinforcement table, also a run through of how Dave and Barry's version of the game went.
I very much like the events card system which will add a little spice to the game, if you decide to use it, using a normal pack of cards, Hearts effect officers, Clubs effect the troops, Spades effect weather or terrain and Diamonds are Acts of God!! What ever you do don't throw the King of Diamonds???

All in all I'd advise any wargamer, whether the Grand Alliance is your thing or not to get a copy of these rules. Well done Barry and Clarence!!!
Posted by Ray Rousell at 15:13

Email ThisBlogThis!Share to TwitterShare to FacebookShare to Pinterest
Labels: Beneath the Lilly Banners, League of Augsburg, NYW, review