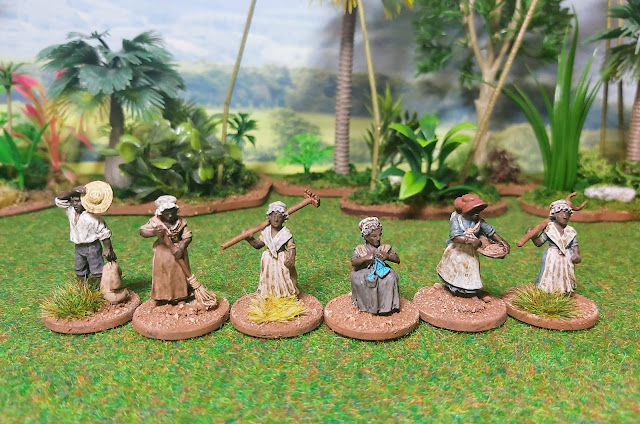 I wanted a few civilians for my Haitian Revolution project and they come from allsorts of companies!!
Figures 1, 2 & 5 in the pic are from Perry miniatures AWI Civilian pack.
The others I'm not sure of? 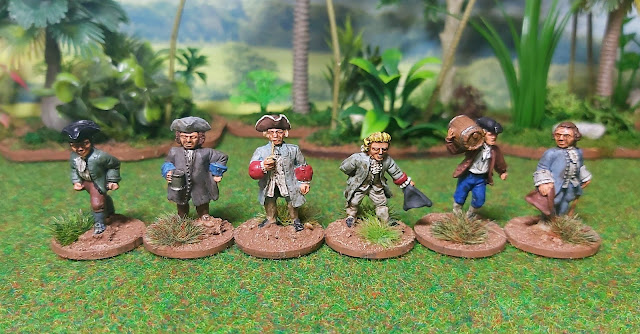 These figures came to me as part of a collection from the late Eric Knowles, via my chum & blogger Dave Crook. All bar figure 5 who's a Perry Miniature, come from Front Rank from various ranges.
Yeh I know by this time the late 1790's the tricorn was out of fashion, but this is the colonies so they'd be lagging behind what's going on back in France at the time.
So Tricorn's it is.
And I had then to paint up.......... 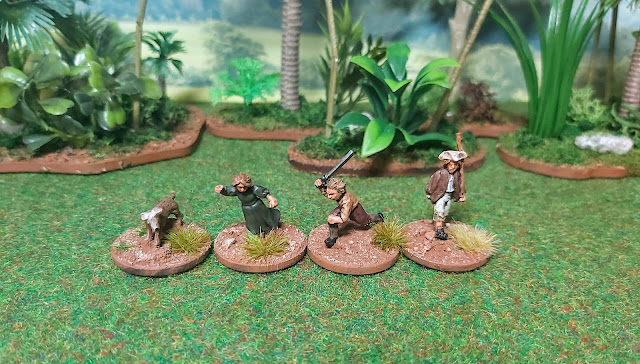 The last figure is again from Perry minis, not sure about the other kids? 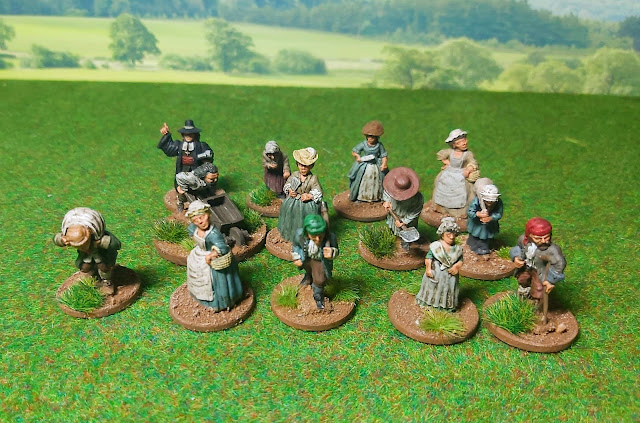 And lastly we have a few more Ladies and Gentlemen.
These were originally lined up to add to my 1690's Donnybrook collection, but at a pinch these will be transported through time 100 years to also appear in 1790's Saint Domingue!!
All figures are once again from Eric via Dave Crook and Front Rank!!!
Posted by Ray Rousell at 16:01 44 comments: 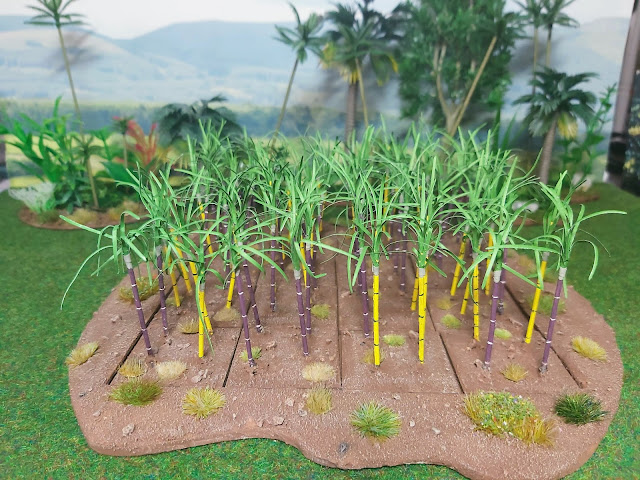 My first terrain build for the Haitian Revolution and I decided on a Sugarcane field. Other crops grown were Cotton, Cacao and Coffee, with Sugarcane being the most prolific and important crop. 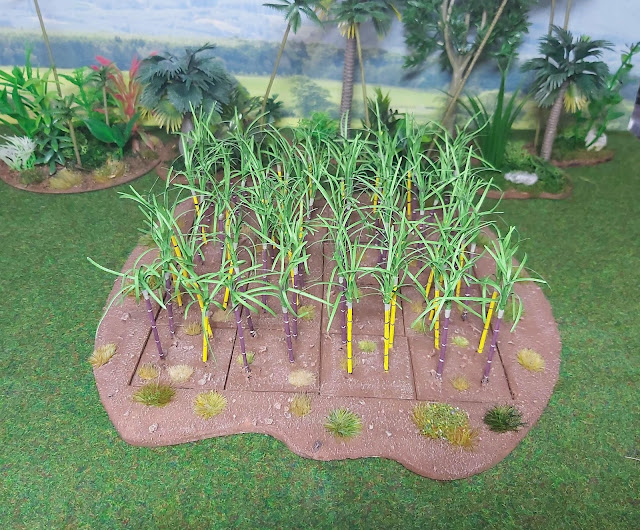 The plants were an ebay buy from of all places Veitnam! In 1 pack you get 30 plants 15 yellow and 15 brown/purple. I'm not sure what the difference is but rightly or wrongly I chose to mix the colours on the bases. Here's an ebay link 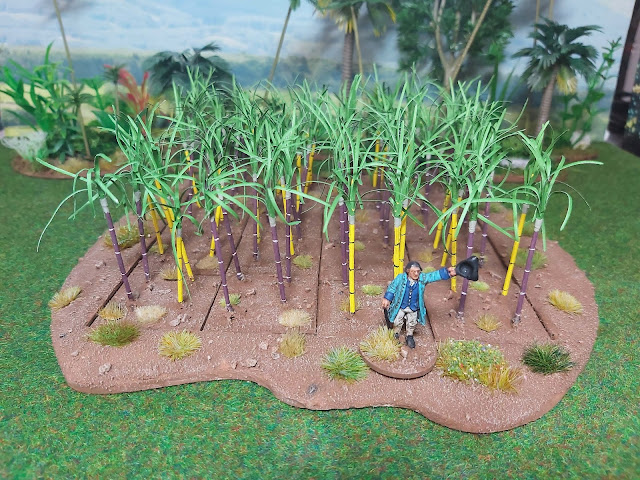 A Perry Miniatures AWI Civilian or Plantation owner for scale 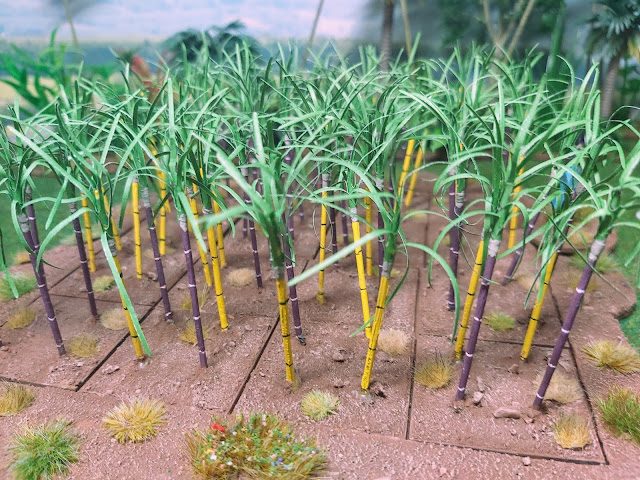 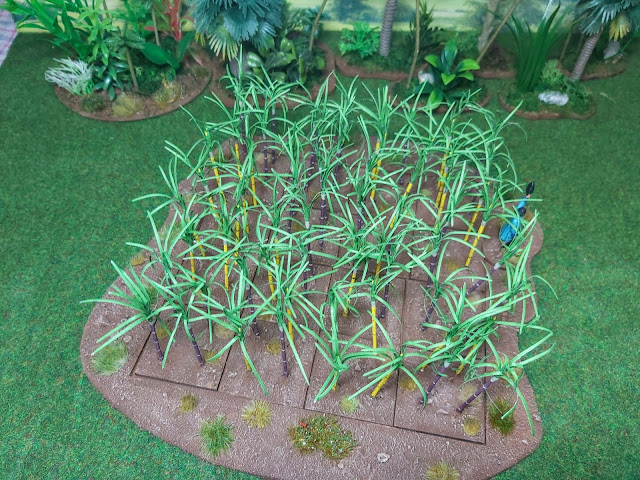 The large base is also from Warbases, I asked Martin to cut me loads of irregular sized bases all shapes and sizes, then stuck some lollypop sticks in a 164mm sqaure leaving a bit of a gap 4mm incase of spread.
A dash or two of polyfiller, then my usual sand and stone sprinkle over a watered down PVA solution.
Gotta say I'm mighty pleased how it turned out. I do have a few plants left, so I might make a smaller field to add to my Plantation or I might see if I can buy another crop to burn!!!
Posted by Ray Rousell at 14:26 48 comments: 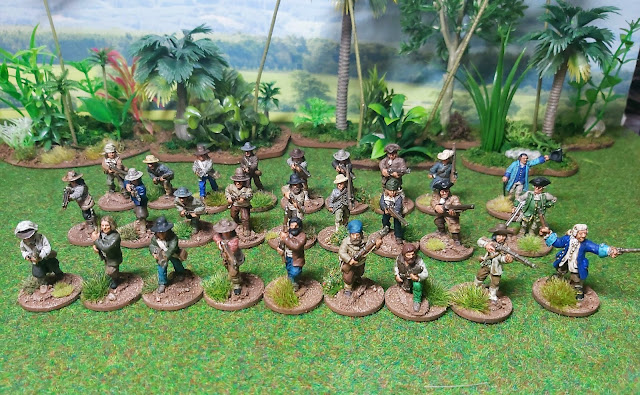 Originally my Haitian Revolution project was gonna be smallish (yeh right, I can hear you laughing already) I planned on painting figures for the early slave rebellion in 1791 and up to the British intervention ending in 1798. But Col Bill changed all that, when I bought loads of unpainted French infantry for the later Wars. Cheers Stu!
Going back to the early Slave rebellion, the slaves are all done, so I needed their enemy, the Slave owners and white people of the land ( NOT very PC I know)
I struggled with the idea of these figures and what they'd be dressed like, as nobody actually makes them. But hey, why would they, they're a bit of a strange one. I toyed with the idea of buying some Casting Room French Revolution figures, even getting so far as getting the order into their web browser page. But in the end decided not too. As they're older figures I was a little worried about their size fitting in with Trent minis. In the end I plumped for more Trent minis, buying figures from their Italian range and their Chouans/Vendean range, I wanted 3 units of 8, so were a few figures short. So a dig into the unloved box of doom and I pulled out some Redoubt, FIW 55th foot, a Pirate and a few Foundry AWI figures. The main Plantation owner comes from Perry minis from their AWI collection. 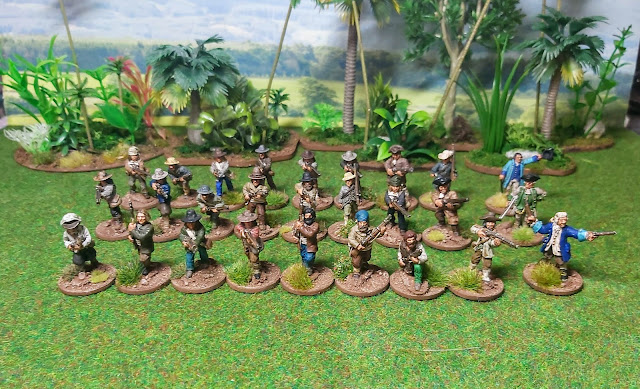 On the night of 21 August 1791, when the slaves of Saint-Domingue rose in revolt; thousands of slaves attended a secret vodou ceremony as a tropical storm came in, the lighting and the thunder was taken as auspicious omens, and later that night, the slaves began to kill their masters and plunged the colony into civil war The signal to begin the revolt was given by Dutty Boukman, a high priest of vodou and leader of the Maroon slaves, and Cecile Fatiman during a religious ceremony at Bois Caiman on the night of 14 August. Within the next ten days, slaves had taken control of the entire Northern Province in an unprecedented slave revolt. Whites kept control of only a few isolated, fortified camps. The slaves sought revenge on their masters through "pillage, rape, torture, mutilation, and death". The long years of oppression by the planters had left many blacks with a hatred of all whites, and the revolt was marked by extreme violence from the very start. The masters and mistresses were dragged from their beds to be killed, and the heads of French children were placed on spikes that were carried at the front of the rebel columns. In the south, beginning in September, thirteen thousand slaves and rebels led by Romaine-la-Prophetesse, based in Trou Coffy, took supplies from and burned plantations and freed slaves and occupied (and burned) the area's two major cities, Leogane and Jacmel. 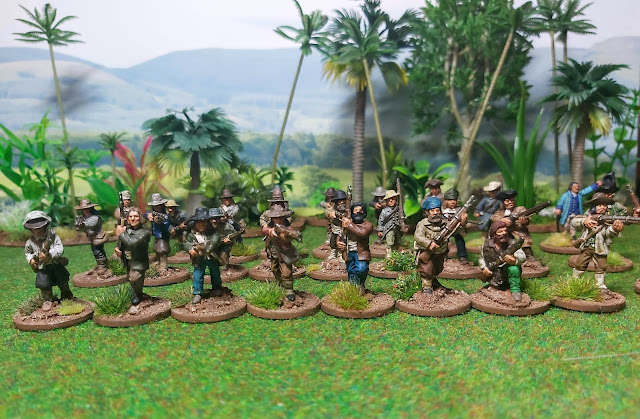 The planters had long feared such a revolt, and were well armed with some defensive preparations. But within weeks, the number of slaves who joined the revolt in the north reached 100,000. Within the next two months, as the violence escalated, the slaves killed 4,000 whites and burned or destroyed 180 sugar plantations and hundreds of coffee and indigo plantations.[ At least 900 coffee plantations were destroyed, and the total damage inflicted over the next two weeks amounted to 2 million francs  In September 1791, the surviving whites organised into militias and struck back, killing about 15,000 blacks. 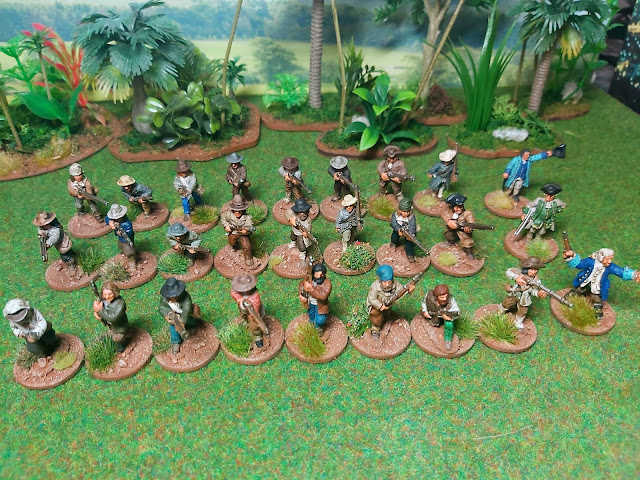 The eagle eyed among you might have spotted some jungle terrain in the background, let me tell you, I've been a very busy boy!!! 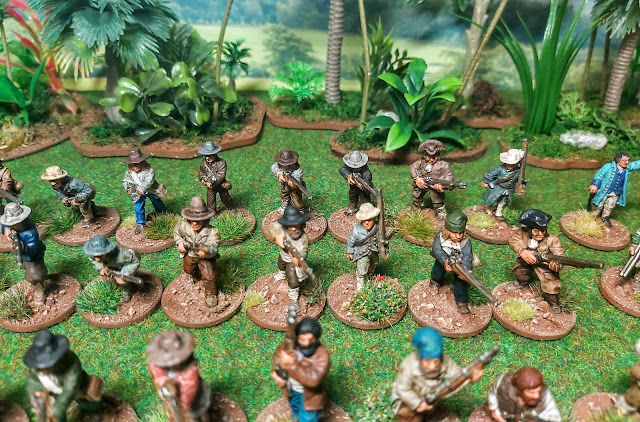 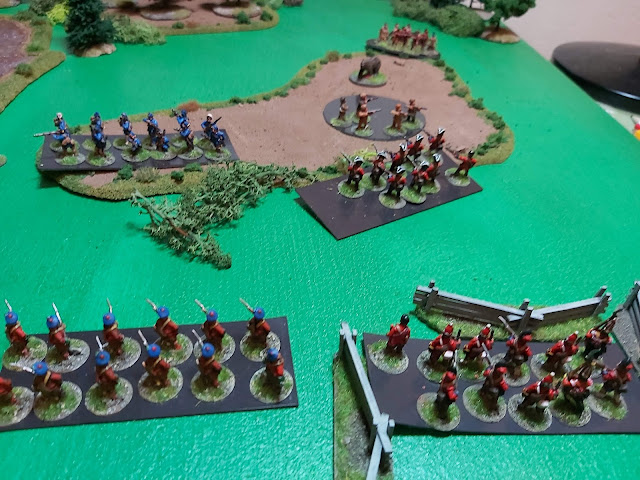 I've been in isolation for 10 days, gotta have a small op this Friday. So to help relieve the boredom, I organized a small game for the Rejects.
We played the 15mm French Indian War game on Zoom last night. Unfortunately, I was using my phone to broadcast the game to the lads. So I couldn't take any pics during the game. All these pics are from the end after the French had suffered a damn good thrashing! 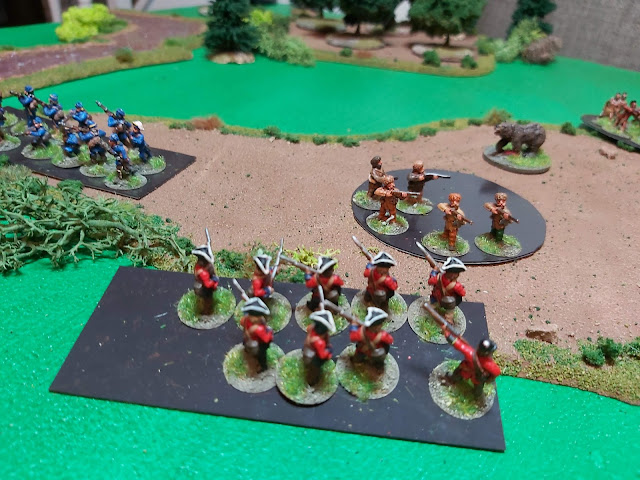 The 60th Royal Americans are taking on a unit of Coueror de Bois while a random bear rooms the woods behind them. 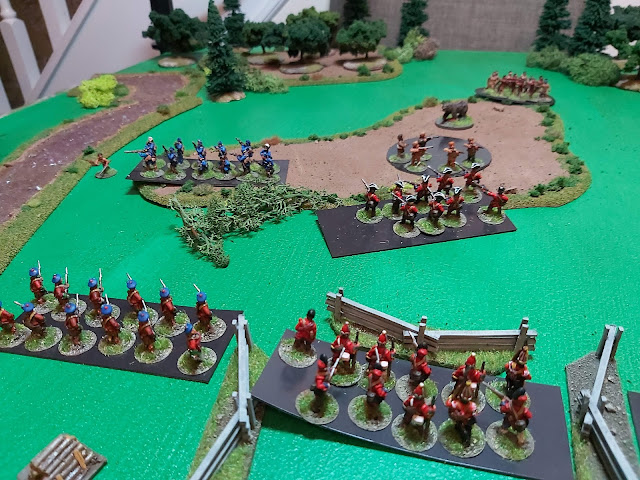 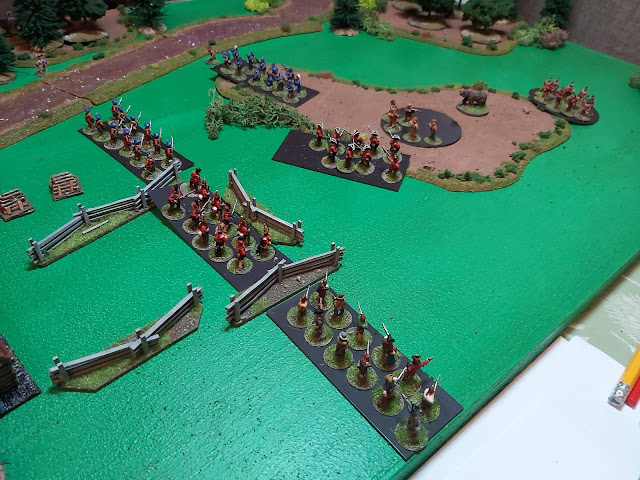 We played a dummed down version of Donnybrook, just to make it easier on me! 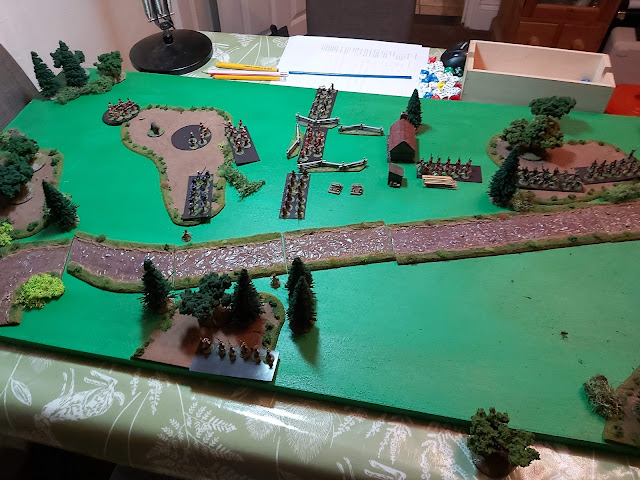 The battle from the French side, a lone French infantry regt Artois, can be seen hiding in the woods. I didn't expect the game to swing around sideways as it did? It was a fairly even game, although the Brits did seem to have a lot more dice throwing luck than the French.

And it was me throwing all the dice as well!!!

Next time I'll try and get some pics. 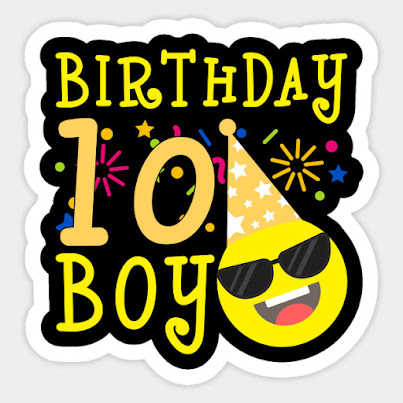 Where the hell did those 10 years go?

My first post all that time ago was on Nine Years War Huguenot flags 1184 hits (click link) at the time it created a hell of a lot of interest, receiving absolutely no comments what-so-ever, (I did pick up a few over the years though).

My top 5 posts are as follows 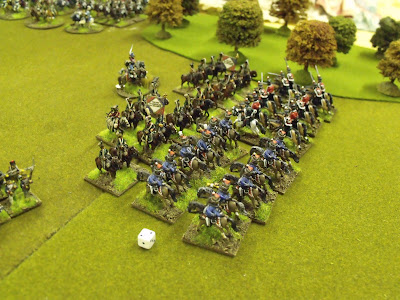 Me and Big Lee were chatting again about the game the other night saying what an utter disaster it was for the French side. Give it a read, its quite ridiculous what happened, if anything It'll make you laugh!!

This is what's great about the blog, we're all getting older, the memory seems be be going, if it wasn't for the blog, I wouldn't be able to rub salt into Lee, Fran and Smithy's nose every now and them.

So I'd advise any gamer to get themselves a blog, its a great help to the hobby.

Once again I just want to say thank you to all my followers, people who take the time and effort to commenters and to all the readers who just like to come and read my guff and look at the pictures!

Remember "Don't Throw a 1", unless you really really need to!