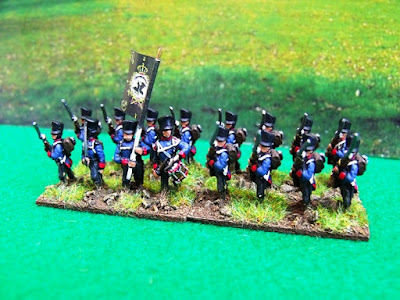 Good God, I hear you cry. A newly painted unit on Ray's blog??
Whatever next?
Do you remember that little thing called a paint brush, well I've not used any of mine since April? Until this week that is! It's not that I couldn't be bothered or lost my mojo, I just couldn't find a spare
minute to get the brush out!!! And to make matters worse, the figures are not even for me, they're for His Nibs next door, Postie! 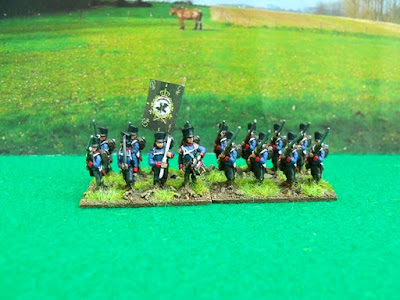 Its back to Napoleonic's for this unit, who are the 1st East Prussian line, 2nd Battalion 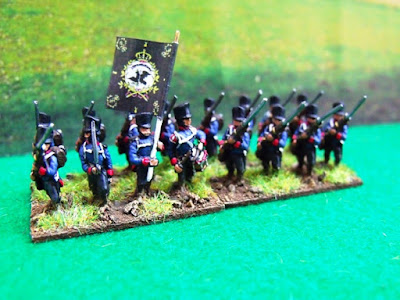 Revolutionary Wars:
During the French Revolutionary Wars of the 1790's the 1st East Prussian Infantry regiment was yet to be formed. The regiment that would become the 1st East Prussian infantry was the No.2 line infantry regiment 'Ruechel' under the command of Oberst Ernst von Rüchel. During the 1790's the regiment was part of the Prussian forces used to combat France. The No.2 fought well in the brief Prussian effort, but after the battle of Valmy they were sent back to Prussia as Prussia tried to conserve it's resources and soldiers.Invasion of 1806:
In 1806, Prussia entered into the War of the Fourth Coalition in fear of France from their defeat of Austria. At the start of the Invasion the No.2 was attached to L’Estocq’s Corps with 4 other infantry regiments. L'Estocq and his chief of staff, Gerhard von Scharnhorst, commanded some 15,000 troops based at Thorn in December 1806 and at Freystadt in January 1807. Harassed by Marshal Ney, L'Estocq marched his troops from February 2 – February 8 through snowy and forested East Prussia; it has been described as "a model of the way in which a flank march in the face of a near and powerful adversary should be conducted".

The Russian troops of Bennigsen were hard-pressed by Marshal Davout in the Battle of Eylau (February 7-February 8, 1807). Leading the last operational unit in the Prussian army, L'Estocq was only able to bring eight battalions, twenty-eight squadrons, and two horse artillery batteries (estimated at 7,000-9,000 men) to the battle; the rest of his soldiers were defending against Ney.Upon the small Prussian contingent's arrival at Preußisch Eylau, Bennigsen wanted it split up to reinforce his weakened Russian troops. Scharnhorst, however, advised L'Estocq to strike with his cavalry around the Russian lines at Davout's exhausted troops; the sudden attack threw the French into disarray. Following the battle, L'Estocq's corps retreated to Preußisch Friedland to maintain coalition communications with Russia. 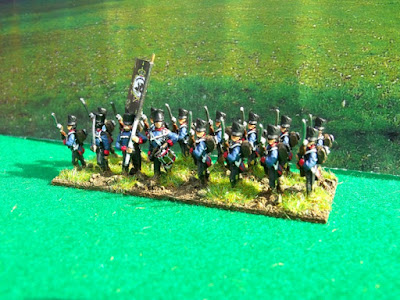 1806/1807 Reforms:
Following the defeat in 1806 Prussia was forced to reorganize and downsize it's army. Six of the remaining infantry regiments were chosen to be reformed, and were each given a light infantry battalion, to complete them. The No.2 with it's new 3rd battalion became the 1st East Prussian Infantry Regiment.The new army was organized into six peace-time brigades, and the 1st East Prussian were put into the East Prussian Brigade.

Russia 1812/1813
When Napoleon invaded Russia in 1812 there were 14,000 Prussian infantry attached to the auxiliary corps of the Grand Army. the six regiments were assembled from assorted battalions of multiple Prussian army regiments. The No.1 infantry regiment of the Prussian forces in Russia was mad up of the 2nd battalion/1st East Prussian Regiment, the 1st Battalion/2nd East Prussian Regiment, and the Fusilier battalion of the 1st East Prussian regiment. Unlike most of Napoleon's army the Prussian forces returned home mostly unharmed, saved by the Convention of Tauroggen.

War Of Liberation:
In 1813 the war of the 6th coalition started, and Prussia mobilized it's army for war. During the first battle of the campaign the 1st East Prussian Regiment had just returned
from combat in Russia, and had two of it's battalions (2nd battalion and fusilier battalion) in the "1st
Combined Infantry Regiment". At Lützen they were on the left flank under Generalmajor von Hünerbein, but were driven back like the rest of the army.

After Lützen the 1st East Prussian battalions were put back together and put in Generallieutenant von Yorc's Korps, in Oberst von Zielinsky's 1st Infantry brigade. The regiment was in the center of the Prussian line, and took heavy casualties first from the artillery barrage of the Grand Battery, and
then the successive French assault. The regiment was in the thick of the fighting for the entire day, but was beaten back to the village of Bautzen. The 1st East Prussian regiment was then present at the battle of Leipzig.

At Leipzig, the 1st East Prussian Regiment was attached to the I. corp under Generallieutenant von Yorck, in the 2nd Infantry brigade (under Generalmajor Prinz CarlvonMecklenburg-Strelitz). At the time of Leipzig, the regiment had 1,840 men in total, or about 600 men per regiment. During the battle, the regiment was positioned on the allied right flank, and was ordered forward on the first day of fighting, to take the city of Möckern. The village was heavily fortified, and had a manor, palace, walled gardens, and low walls. Each position was turned into a fortress with the walls being loopholed for covered fire by the French. The ground to the west of the position was too wooded and swampy for emplacement of artillery. A dike ran east along the river Elster being 4 meters high. The bloody street fighting took a heavy toll on both sides, and the battle hung in the balance until Prussian cavalry charged and secured the field. Overall, both sides suffered around 9,000 casualties. For the next three days of the battle the regiment stayed on the right flank, and pushed to try to encircle Napoleon's forces, and even helped secure the village of Leipzig itself.

After the battle of Leipzig, the regiment continued on the allied advance through France, fighting in the battles Brienne,The six day campaign, Craonne, Reims, and Paris. The unit was then sent back to Prussia. For reasons unknown, the regiment was not part of the army involved with the 100 days campaign, and so it's service to the kingdom of Prussia ended at the battle and occupation of Paris in 1814.

Posties Rejects @ Broadside - The Battle of the Cross part 2 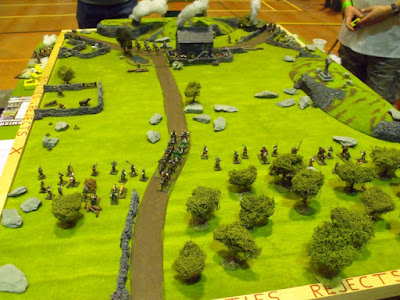 As promised a few pics of the second Battle of the Cross, our game at Broadside last month.
After the whitewash that was the first game, we decided to start again, hopefully me and Lee would have a bit of luck this time??
For the second game we swapped sides, that meant me and Lee were now the English, I was Mad Dog Stapleton and Lee was a Mercenary Capt, while the Scots were commanded by Surg (Wally Armstrong) and Smiffy playing Wally's son Robert the Fearless.
Luckily as it was a demo game Postie allowed us to start further on the board, see pic above, BUT he let the Scots start with more troops on the table from the start, we both winged a bit, but were told to shut up moaning by Herr Fieldmarshal Postie! 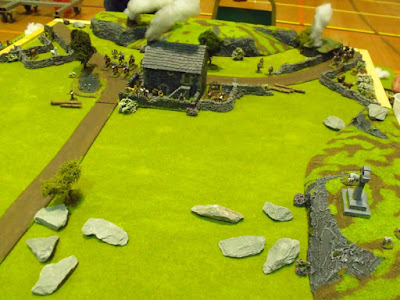 As you can see in this pic the Scots have a lot more troops on the table, than we did in the last game!
Boo! 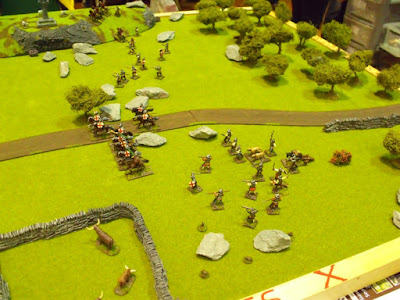 Me and Smiffy threw well, and ran forward. 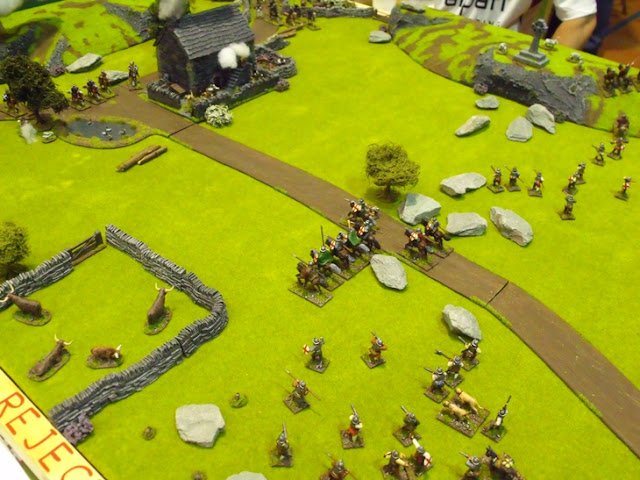 AND that's it
Game bloody over!!!
Why you ask?
Look at the cavalry on the road, there's a casualty there
its none other than bleedin Mad Dog Stapleton...
shot dead on his horse, with a extreeeeeemly lucky throw of the dice.
A 20 was needed on a D20 and that's what Surg threw.....
or so he said, none of us actually saw him throw the dice or saw it on the table before he
picked it up??
Hmmmmmmm? 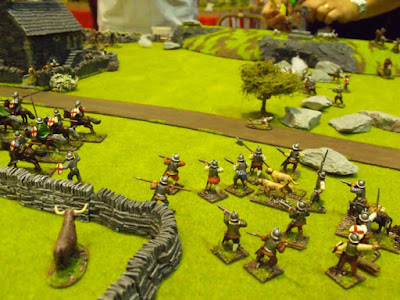 So rather than end the game and have to stsrt the game all over again and in the spirit
of the game Smiffy took over command, while I lay sprawled
out on the ground by the tree.........

Surj didn't advance at all, he just stood still and waited for our advance.
While Smiffy took pot shots from the house. 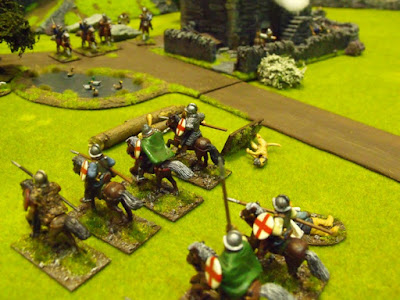 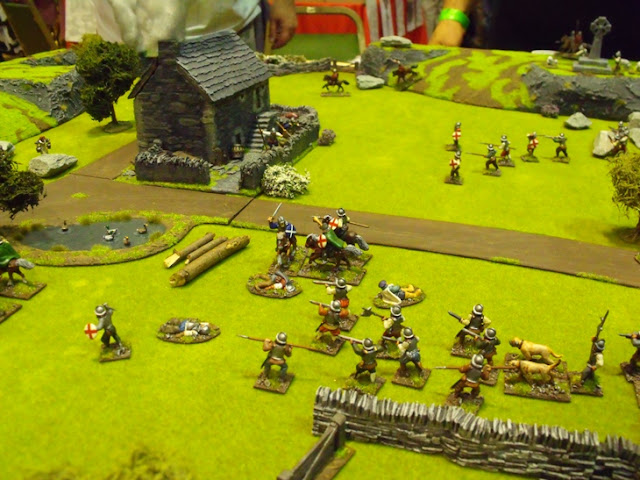 We carried on advancing, I moved into a better position with most of my horse just outside the pic on the left. While Surj charged his horse into my flank, killing another on my men.
But in my turn a double teamed Surj's victor! 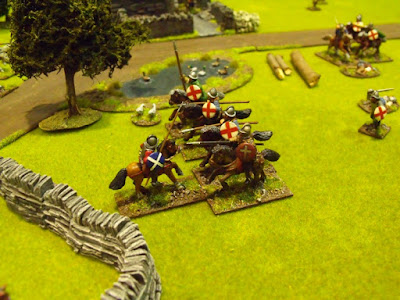 Now you'd think I'd have won this melee, but you'd be wrong, the dice gods stuck their 2 fingers up
at me in this melee and I lost another 2 figures, while out of shot Smiffy peppered Lee's troops with shot. Lee lost 4 figures. 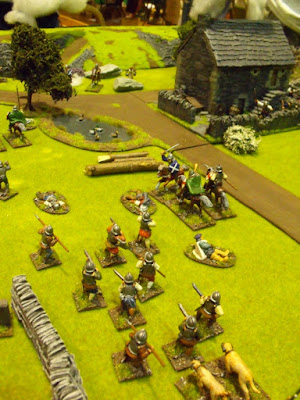 Which unbelievably took us to 25% casualties, which then forced a morale check.
There are no more pics so you can guess what happened!!