Now that worked out a lot better than I hoped it would??

The Rejects all, (well some of them), made their annual appearance at Milton Hundred's
Broadside show yesterday.
Which also meant I finally got to play a game of Donnybrook, it only took me 2 years to organize??
But this wasn't your normal Donnybrook affair, there were 52 unit and character cards!! 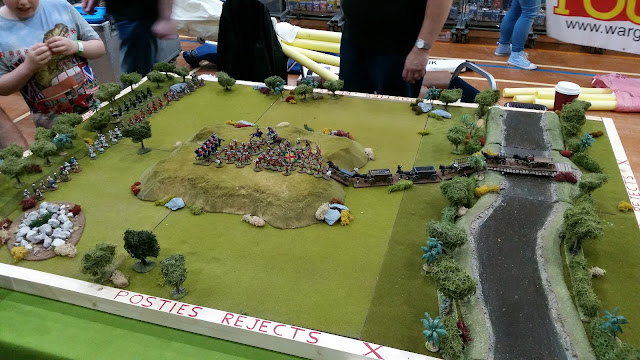 
Andrew Rutherford the 1st Earl of Teviot took over as the Governor of Tangiers on April 9th 1663. Teviot soon set about implementing major reforms of the Tangiers garrison and ordered a new network of outlying fortresses built to help protect the crowns possession. His main problem in doing so was the lack of building materials, so on May 4th 1664 he sent out a large detachment of troops, a mixture of English and Irish soldiers, towards an area known as Jew's Hill (or Jew's Mount). Teviot intended to gather stocks of stone of  lime, timber and other materials and also to cut down some brushwood on the banks of the Jew River, which the Moorish forces had used as cover during their attacks on Tangier.
Morale was very high as on 29th February there was a major engagement during which the Tangier Horse charged out of the city and captured Ahmad al Khādir ibn 'Ali Ghaylān, generally known to English-speakers as Gayland’s personal standard.
Once Teviot and his 500 troops had crossed Jew's River, they encountered around 3,000 Moroccan warriors commanded once again by Gayland. The English forces rapidly attacked and drove them off. They pursued the fleeing enemy, but it quickly became apparent that this was a trap as a much larger force (approx. 8000) were waiting to ambush them. The broken terrain was ill-suited for the British to form their battle ranks, and the engagement quickly descended into hand-to handing fighting in which the English were overwhelmed by sheer weight-of-numbers. Teviot attempted to rally his men on the top of Jew's Hill.
The 4th May was the most disastrous day experienced by the garrison during its entire occupation of Tangiers. Only around thirty of the five hundred who had marched out escaped back to the safety of Tangier. 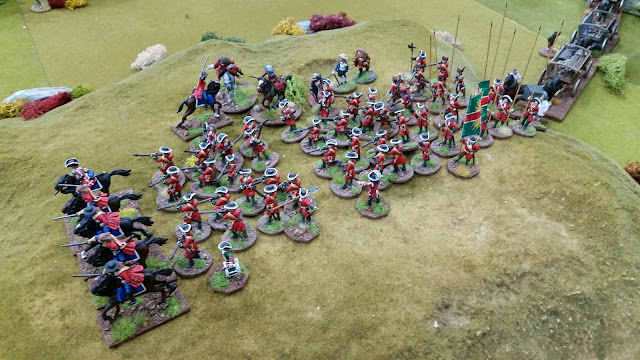 The Earl of Teviot leads his men up on Jews Hill. 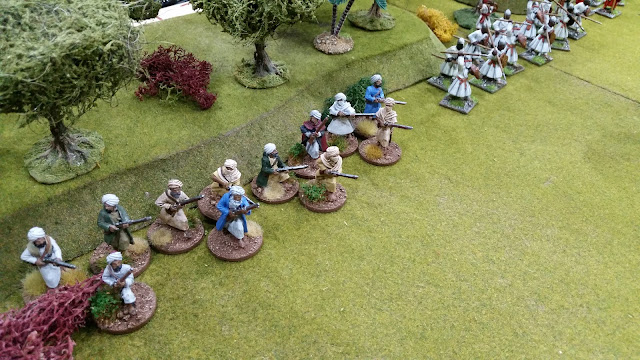 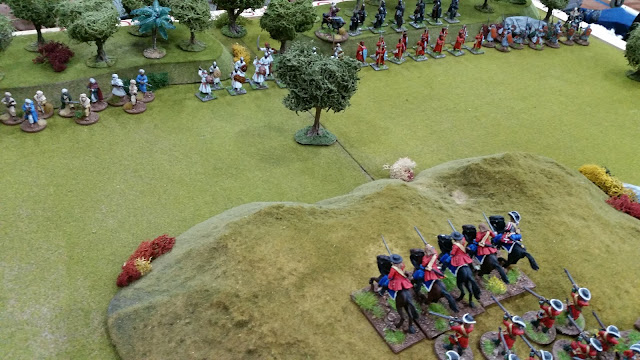 Five units in all. 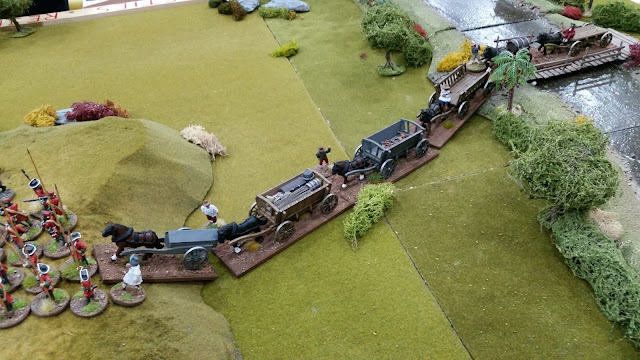 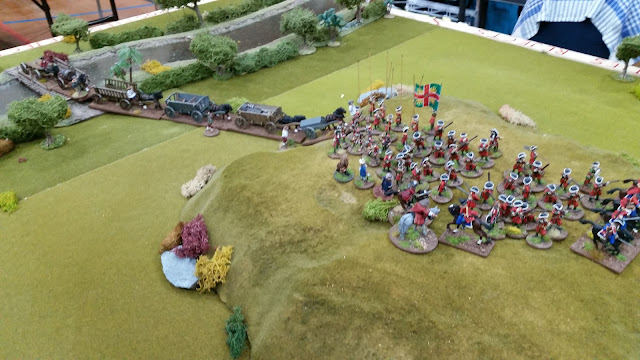 A trooper rides back and informs Teviot of the enemies approach. 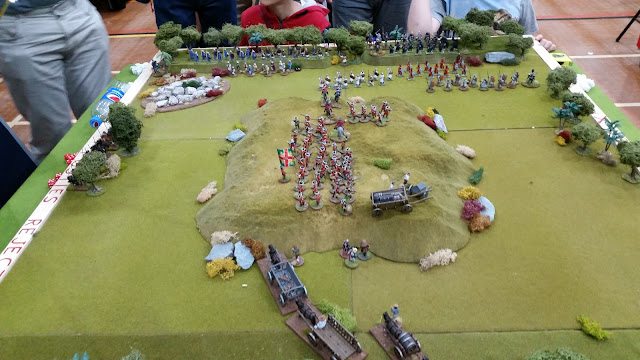 The Moors advance and the Tangier's foot hurriedly try to deploy. 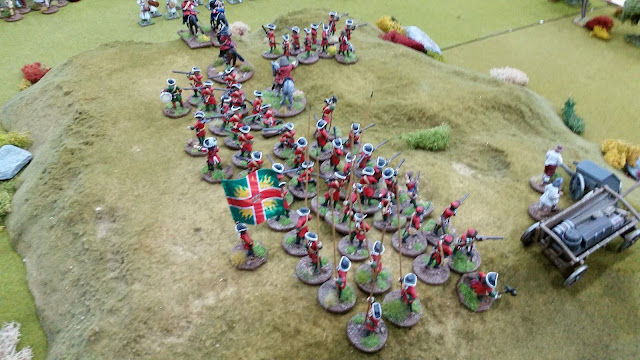 The wagon master unhitches two of the wagons, they may prove useful to hide behind? 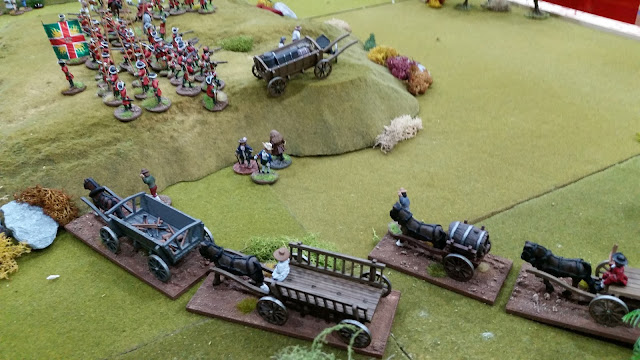 Esq Lond, Dr White and Matthew Luke the Governors Secretary start to head towards the bridge. 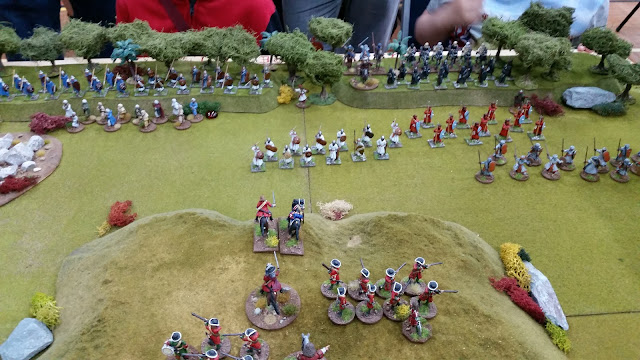 The Tangier Horse get shot to pieces by the one and only Moorish musket unit. 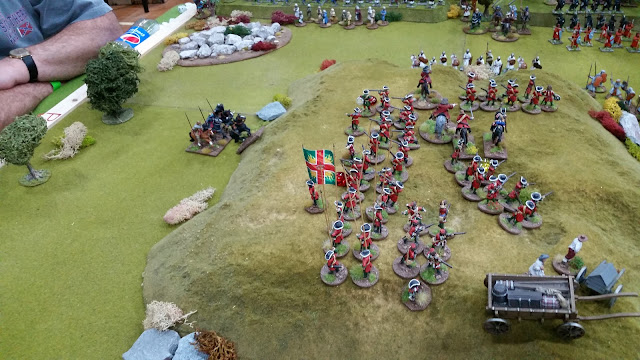 Two Moor Horse attack from the flank, but confident English musketry soon puts pay to them. 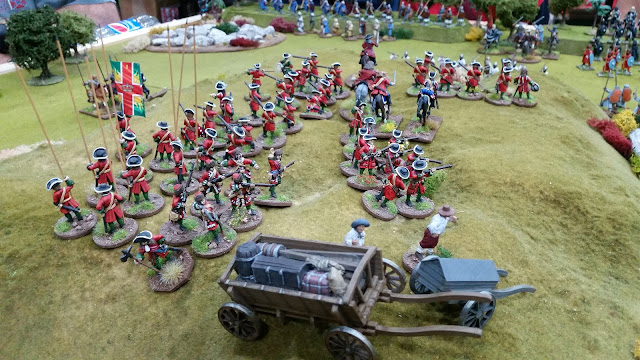 The last 2 Tangier Horse fall back to the centre of the hill. 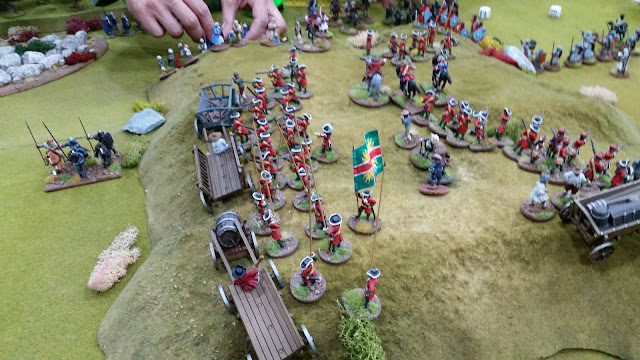 First card out the next turn was the wagons, who move forward and unhitch, just in the right place .
Meanwhile, the 3 civilians think better of heading toward the bridge, and head for the safety of the English foot. 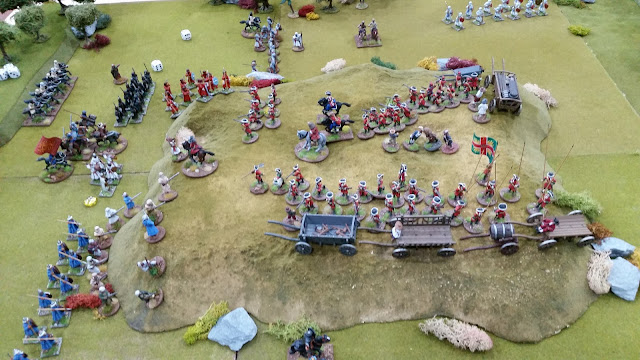 More Moors appear to the front and right! 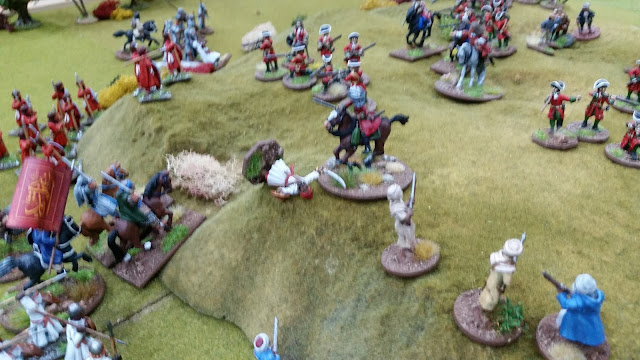 What's he doing??
Earl Teviot, charges the Moorish Fearless one!
I thought it was curtains for Teviot, but a throw of 10 on a D10 followed by a 1, killed him, without him getting the chance to fight back.....and I had such high hopes for him too??? 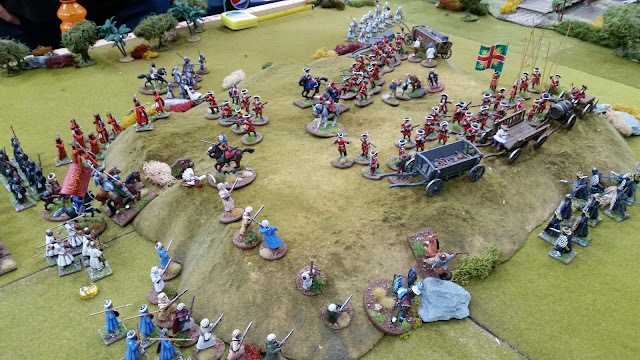 Its looking a little dodgy now? 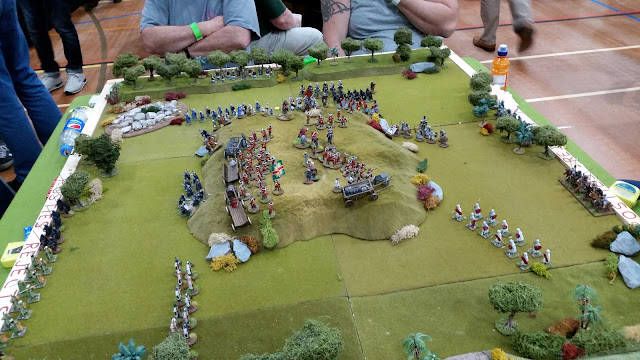 Next turn, even more Moors turn up, surrounding  the hill. 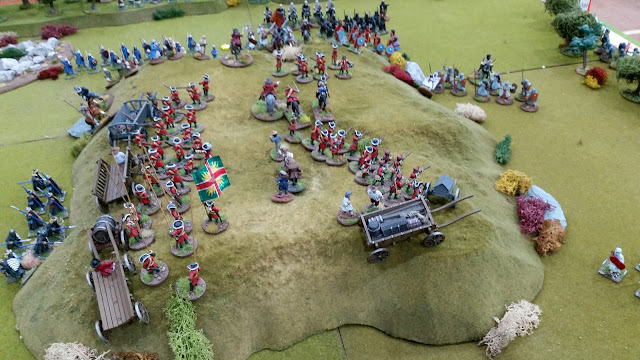 Leading from the front, Teviot carry's the fight to the Moors, but was soon cut down by none other than Gayland himself! 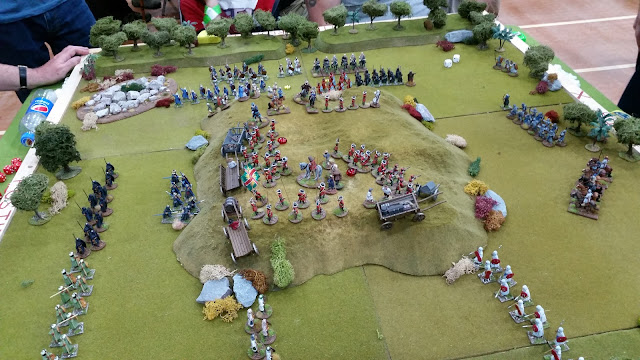 I still can't believe the English are holding up so well?? 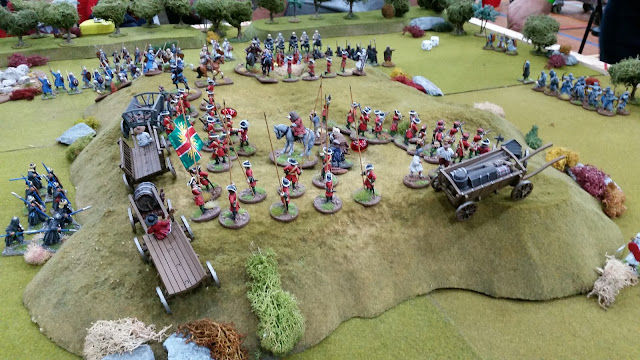 There's a rather big hole on the hill. 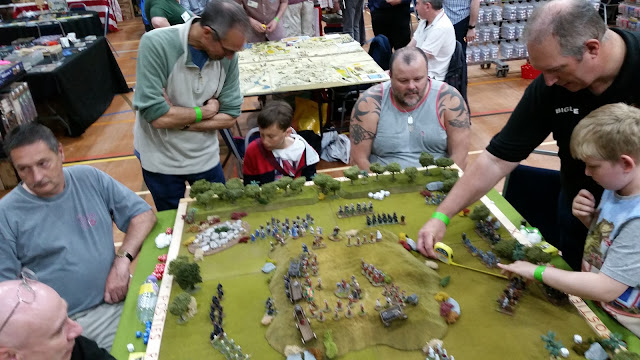 The Rejects at play. 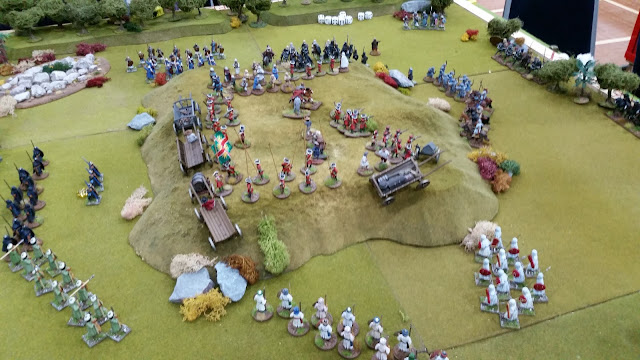 Moor infantry make it up on the hill. 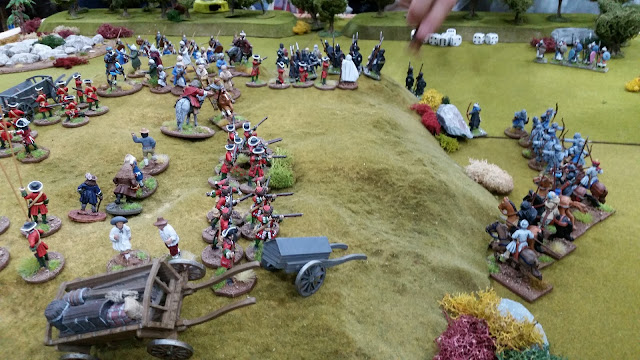 In the centre, Engineer Johnson get attacked by a lone Moorish horseman who keeps passing his morale check. 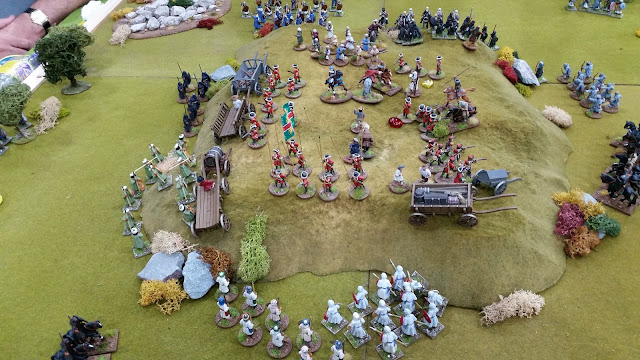 Moorish archers, muskets and horse are battering the Tangiers foot. 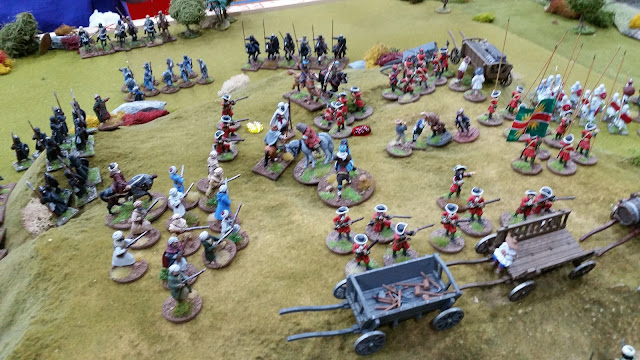 Johnson gets double teamed and falls dead from his horse. 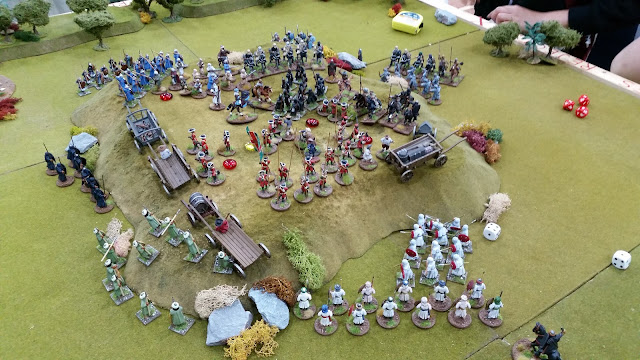 There seems no way out?? 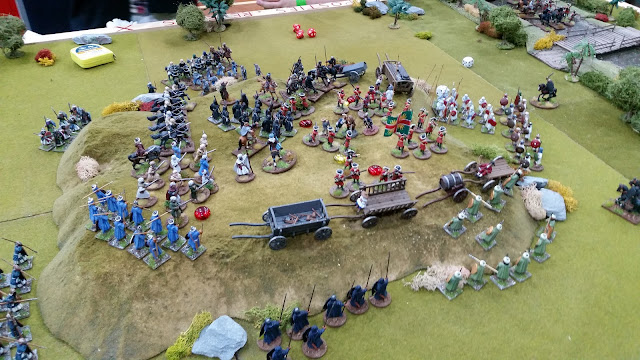 With only a handful of figures left including 3 characters, Ensign Piggott, Sgt Lee and the Standard Bearer David Israel the English threw in the towl,
The final result was a rather unsurprising Moorish victory.

I was extremely pleased with how the game played, the rules  really seem to catch the flavour of the period to a T. Even better the Rejects seemed to all enjoy themselves, even Lee and John who valiantly tried to stem the flow of the Moors, knowing they were gonna get battered!
We had lots of interest from the public, most saying either they'd never seen a game from Tangiers or never heard about it!! I've even managed to convert Reece and Simon from Gravesend Wargaming club to the rules, they went out and found a copy of the rules straight away!!
I deliberately left a few things out of the rules, mainly to make the game last a little longer and make it easier for the English.
I didn't include the End of Turn card - There were so many units that may never have moved, so thought it best to leave it out.
I also left out the mis-fire muskets penalty and let all the troops have full move, when they were in rough ground.
Hope you enjoyed the report, hopefully you'll be hearing more from Donnybrook in the near future!!