The Battle of Kostschin 1945 A fictional batrep 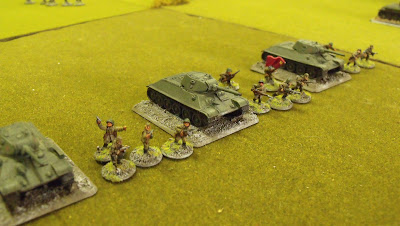 Last Sunday three of Posties Rejects turned up at the usual haunt for a practise game using a new set of rules. Now the most amazing thing about the game, was the long lost Reject Ian turned up for a game, which was quite handy as he was the ref for the day, and we were using his figures and terrain! For the last couple of years Ian's been a bad reject and not turned up at Mansion Postie for any games, so it was a pleasure (?) to see him.
The previous Thursday Ian came and setup the game in Posties shed and what a delightful game it was too, I can say that, because history is written by the winners and that was me, I'm sure Fran (The Angry Lurker), will also try and claim victory gabling on about me giving in before any dice were thrown, but he's ginger and therefore a liar in my book!!! He may also go on about bad dice roles or even good dice rolls, but its just sour grapes!!
Anyway on with the game, I was in charge of a medium sized, German army, including a few Tigers, Panthers Panzer IV's and not a lot of infantry, now Fran will likely say that, this is a goddam lie and I'm a cheatin' ba$tarrd. Let's just say the Russian commanders Franski and Postielov were shot by firing squad  the next day due to the failure to take the town and bridge at Kostschin, (pronounced koost-stin). I, Raystein, was raised to a hero of the Fatherland for my gallant defence of Kostschin, against the overwhelming forces of the Soviets.

I had to set up all my troops on paper, which did take me quite some time, I'll be the first to admit, I'm not as up to date on WWII tactics and weapons and I made a huge mistake in my setup, which obviously made the Russians chuckle. I was given 3 pieces of terrain to place down as hull down markers, now the ref explained that it would give me all round protection for my tanks and make them harder to hit, BUT he neglected to tell me that I wouldn't be able to move them for the rest of the game, Oooopss!!!!!!!!