The Battle of Ludford Bridge 1459 - A WotR batrep 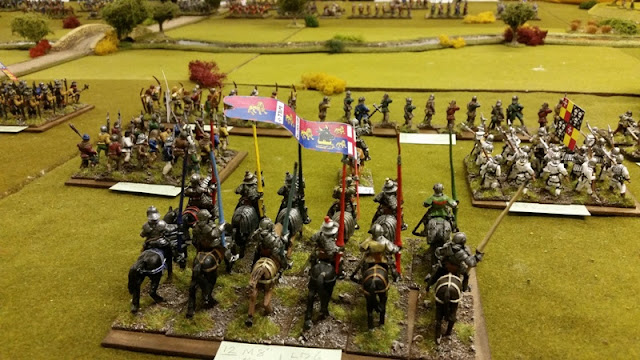 .....Or the Battle that never was
The Rejects got together on Sunday for our first War of the Roses game since 2011!! 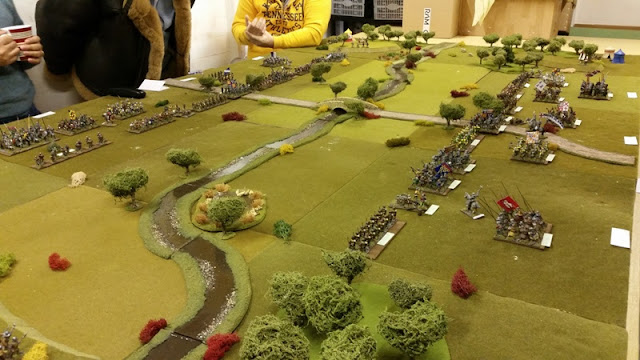 Richard, BigLee and myself were the Yorkists, on the right, while John, Ian and Surj were the Lancastrians on the left.


Unknowingly (Postie kept it a secret) we were fighting a battle that should have been fought in October 1459, but Richard Duke of York thought better of the situation and buggered off very quickly first to Wales and then to Ireland...........perhaps we should have done the same???? 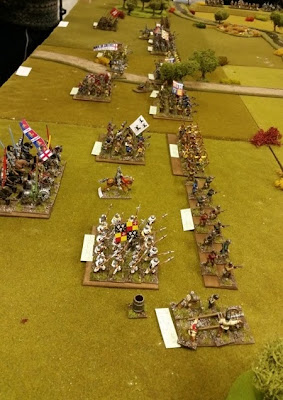 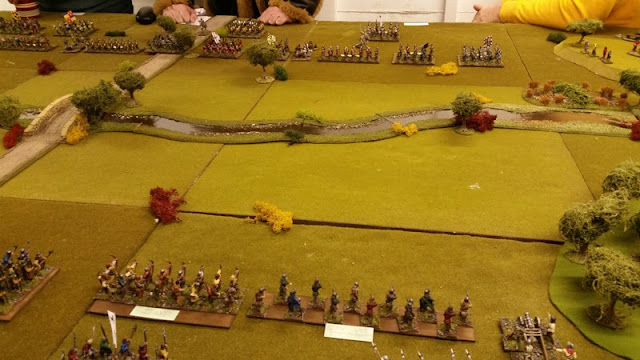 Postie placed a river across the centre of the table, which was going to make it hard work for both sides. We decided to take the bull by the horns and try and get across the river, all along our lines. 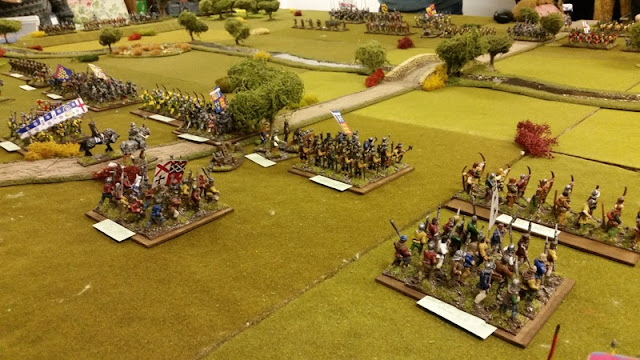 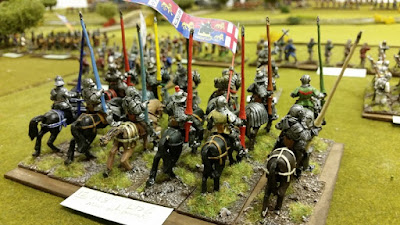 My Men at Arms 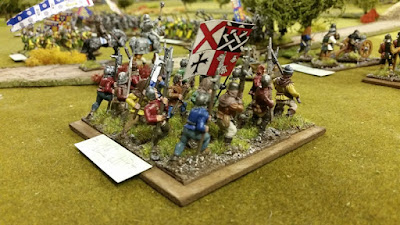 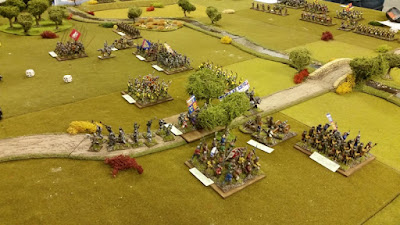 Rich changed formation with his Dismounted Men at Arms ready to charge across the bridge. 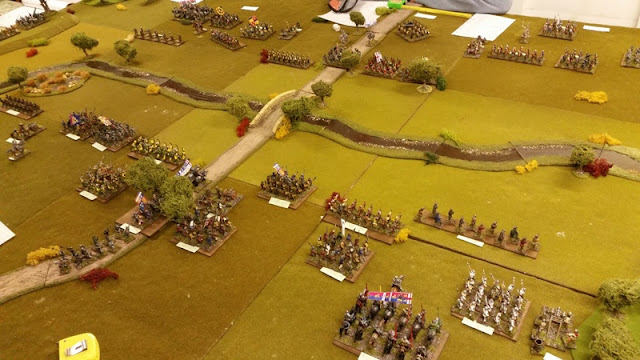 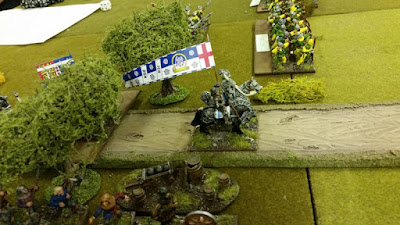 Richard, Duke of York and Bannerman 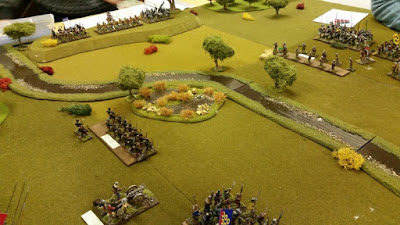 Trollope sitting on the hill.....waiting?? 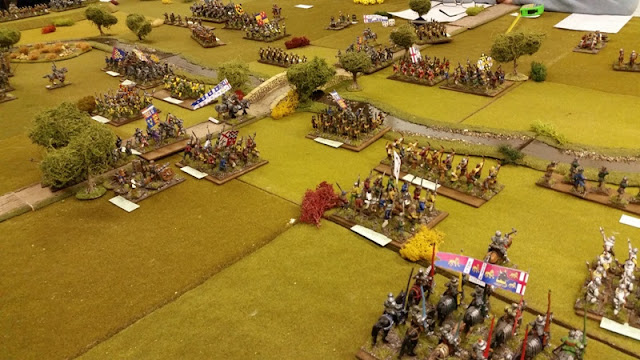 We got to the river first, both sides lost many casualties to missile fire. 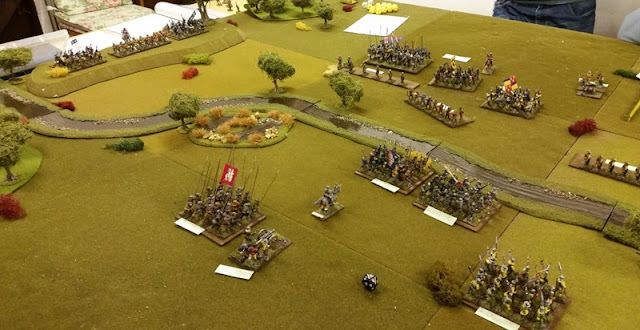 We took a chance with the troops on the hill, hoping they were on our side, but we just had that horrible feeling they weren't?
Concentrated fire destroyed Lee's archer unit that were on the left of the Pikemen. 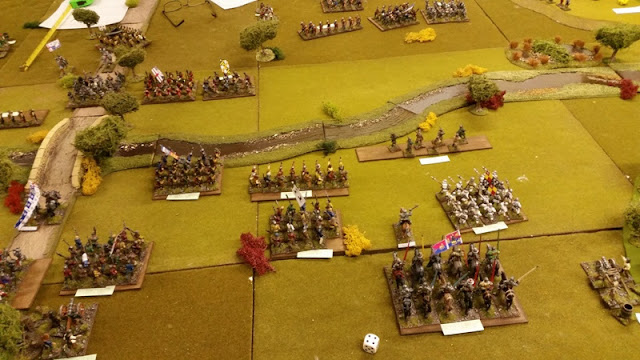 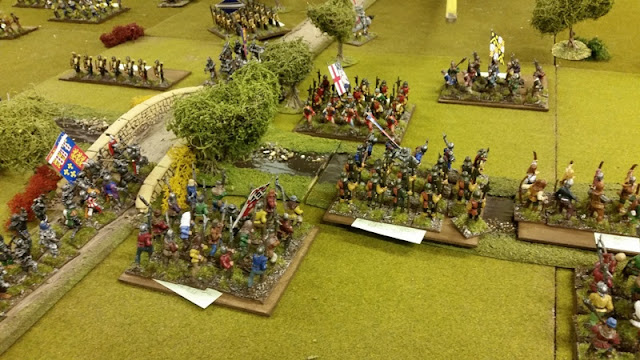 Richard and me entered troops in to the river, it was a little confusing??
It would take us 2 turns to cross the river, the first move would leave us in the centre, the next move just the other side. But we were not allowed to charge out of the river....but John moved right up to the river edge, which meant we could no longer advance??
Postie reminded John of his orders and force-moved the Lancastrians to charge us in the river. 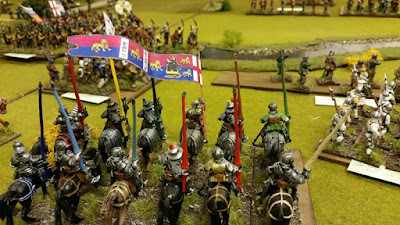 Hmmm? there's a nice gap there?? 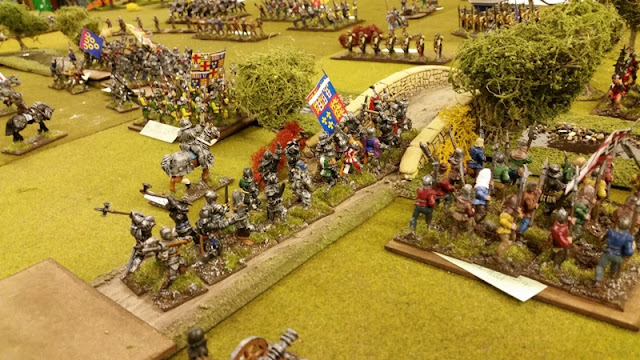 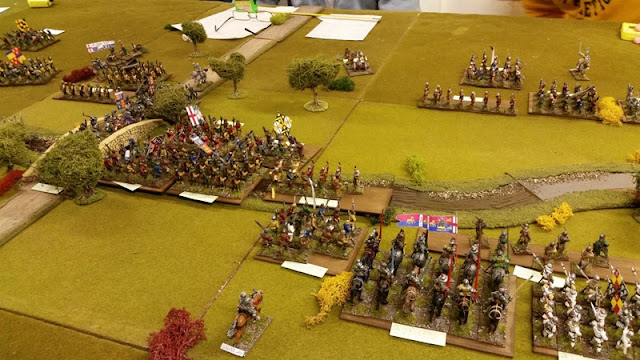 Richard moved his other Billmen unit in to the river as he was not allowed to charge into the river. 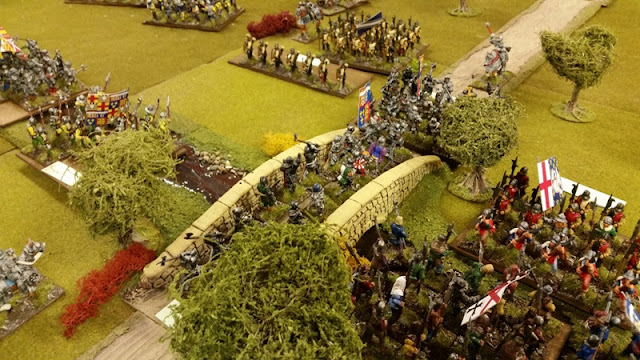 Rich makes contact with John's Men at Arms waiting on the other side of the bridge. 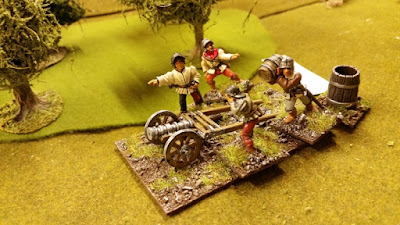 I had already taken a few potshot at Ian's troops with my gun when........ 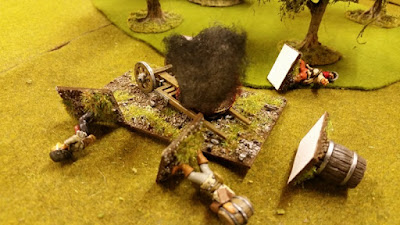 BOOM!!!!
The gun misfired and blew up killing all the crew!!

They were close but we lost all melee's, and were pushed back across the river.
Meanwhile to the left of the bridge, we had a disastrous turn, the Lancastrians slaughtered 2 units with missile fire, including archer fire from the now reveled enemy Trollope,  leaving us in a hopeless situation, with our left flank in tatters, we left the field.
Well done chaps!
cough!

This was a difficult game, they knew that Trollopes troops were their's from the start, we didn't. If we'd known we probably wouldn't have attacked, but that was the nature of the game. That's why York never fought the battle!!
Only 1 gripe about the rules, Postie needs to sort the crossing river rules out, (and it'd help if he would tell me I can't fire with an archer unit while crossing the river, before I do it!!)