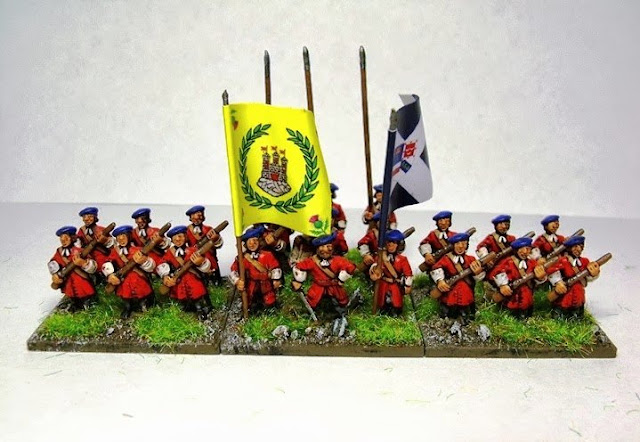 Back to the Nine Years War for today's post, the Battle of Killiecrankie to be specific. The figures were actually painted back in June but I've only just managed to get them based  up.
The regiment was raised on 19th May 1689 in  Edinburgh by David Melville, the 3rd Earl of Leven. Its written that volunteers for the unit were so high that they managed sign up 800 men in just 2 hours. Some of these men are thought to be veterans of the Battles of Drumclog and Bothwell Bridge, while the NCO's were drafted in from the Dutch Scots brigade. Leven's fought in the centre right of the Williamite battle line at Killiecrankie. During the battle Lord Kenmure's regt fled as the Highlanders charged, some of Levan's regt followed suit, while the rest and other remnants were rallied by the Earl and stood firm as the battle closed.

The figures are from Essex minis once again, there is some argument that they shouldn't be in bonnets, but if its good enough for Stuart Reid in his book I Met The Devil & Dundee", its good enough for me! Although after Killiecrankie I would think they would have been ordered to where hats. Its not known exactly what Leven's coat colours were, but its agreed they wore red coats with possibly either white or yellow cuffs,as nearly all Scots regts at this time had white cuffs, so I chose white.
As for the flags of the unit, once again they are not known so I went with a saltire with the coat of arms of the Earl of Leven in the centre for one, while for the other I went with an idea of Mr Reid again in the same book previously mentioned. There are two drawn pictures of flags, one is an unknown flag with either the coat of arms of the Maitland family or Edinburgh castle in the centre, while the other very similar flag was carried by Alexander Stewart's Edinburgh regt that fought at the Battle of Dunbar in 1650. So I combined elements of both flags and came up with this one, it probably should be in white, but it looked better in yellow, that's conjecture for you! 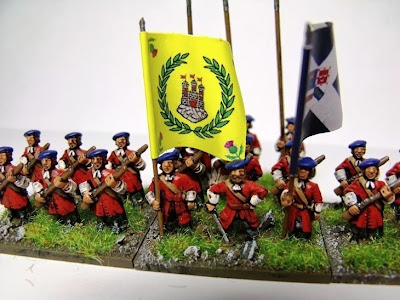 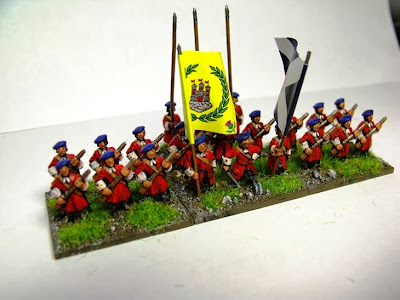 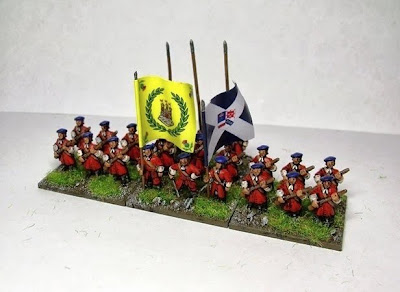 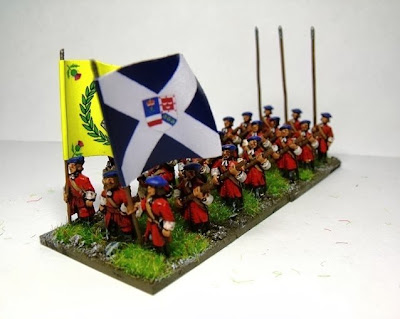 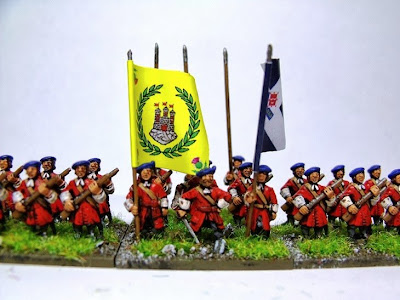