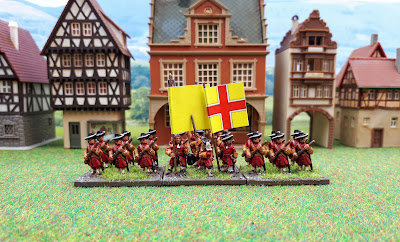 The third and last of my recently painted units for our game at Broadside a few weeks ago and this one's Ferdinando Hasting's regt of foot.

The regiment was raised during the emergency of the Monmouth Rebellion in 1685. Theophilus Hastings, 7th Earl of Huntingdon was issued a warrant on 20 June 1685. As was customary, it was called Huntingdon's Regiment of Foot and based for recruiting in Buckinghamshire. The regiment was not ready in time for the battle of Sedgemoor on 6 July 1685 but was sent to Scotland in 1689 after the Protestant William of Orange acceded to the throne of England. The Earl of Huntingdon was considered disloyal to King William III so was replaced by his kinsman Ferdinando Hastings in December 1688. 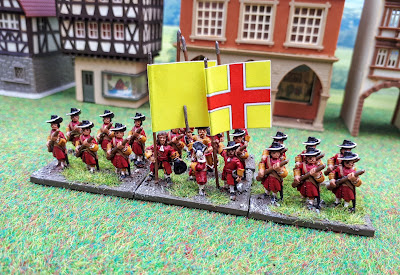 At the Battle of Killiecrankie, in 1689, Hasting's Regiment were on the right of the English line, as they were at the back of the column during the advance into Killicrankie pass. As the Highlanders charged there was little time to fix bayonets and most of the soldiers turned and fled. Hasting's and Leven's Regiments mainly stood firm and 'maintained their ground till night'. However, at the close of battle General Mackay found himself alone at one point and managed to push his way clear on his horse. It was now dark and the only men he could find were those of Leven's and Hasting's. His army was reduced to 500, the rest were killed or dispersed. They were the only English regiment on the English side at the battle. 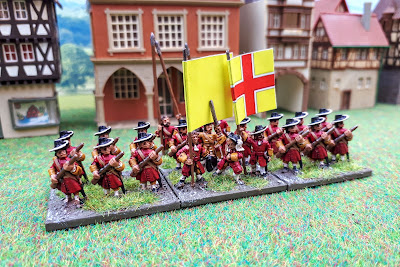 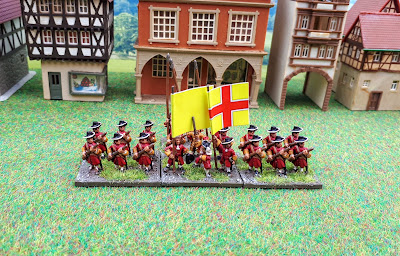 In 1692, Hastings' Regiment sailed to Flanders and, in 1694, took part in the disastrous amphibious assault at Camaret Bay on the French coast, to seize the port of Brest.

Hastings was described by the historian Fortesque as, 'One of the most unscrupulous scoundrels, even in those days of universal robbery, that ever robbed a Regiment.' His misdemeanour came to light in January 1695 when the people of Royston petitioned the House of Commons for the failure of the authorities to pay their soldiers so that they were unable to settle their bills for food and lodgings there.

There were several ways that the Colonel of a regiment could profit at the expense of the soldiers, and the government. The soldiers' clothing was paid from 'off-reckonings' which were deducted from their income of 8d a day (8 old pence). This fund could be increased by claiming for more soldiers than were actually in the regiment. Also illegal deductions were made from the remaining 6d a day so that soldiers actually received very little, and sometimes nothing at all for weeks on end. The following month, on 23 Feb, the regimental chaplain petitioned the House of Commons for non-receipt of pay. The regimental agent, Tracy Pauncefoot, could not supply an answer to this complaint and, having been taken into custody by the Sergeant-at-Arms following the Royston petition, he was now put in the Tower of London. 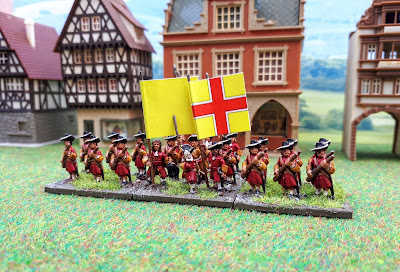 A few days later Colonel Hastings and four other officers were questioned by the House. Pauncefoot also attended and was found to have misappropriated 500 guineas. The findings of the House stated, 'In particular Colonel Hastings hath compelled some officers of his regiment to take their clothes from him at extravagant rates, by confining and threatening those who would not comply therewith..' On 4th March 1695 Ferdinando Hastings was deprived of his commission. But eight years later he sent a petition to Queen Anne to take into account his long service and sickness. He was granted 'Brigadiers pay from the contingencies if there be room for it.' 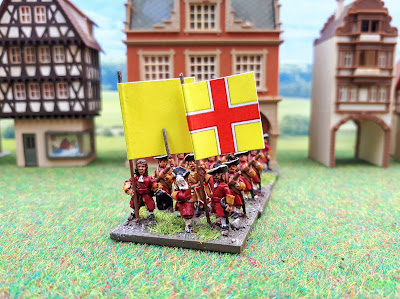 In 1695 Sir John Jacob became the colonel, and it was as Jacob's Regiment of Foot that they returned to England at the end of the war in 1697.