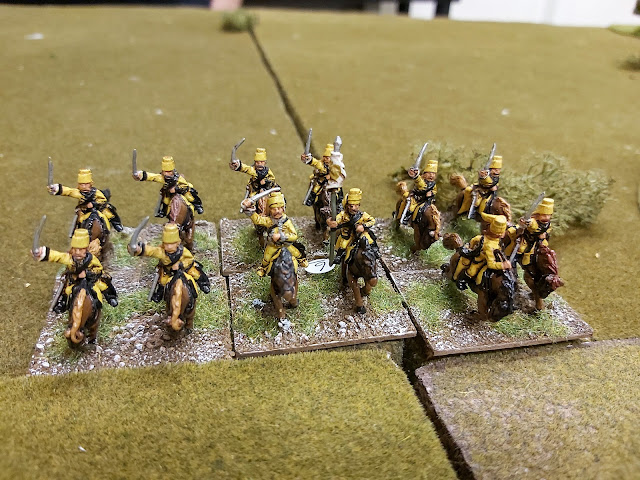 Only two Rejects made it to last Sunday's game, BigLee and myself. We picked out the hat not even knowing what game or period we were playing. Lee picked first and Picked the Russians, I picked out the Prussians. 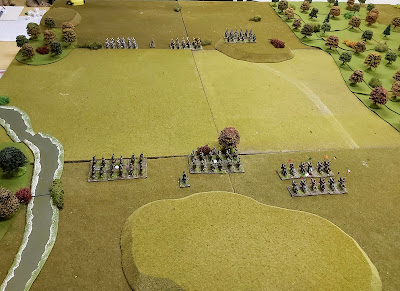 We entered the Shed O War to find 2 games ready and waiting, the first being a small sideline game, the Battle of Schwedt Wood 12th August 1758.
Both sides had 3 cavalry units 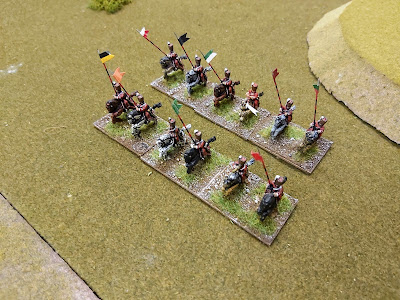 My Prussians Reconnaissance force consisted of
2nd Hussars
4th Hussars
& Bosniak Lancers pictured above.
Lee's Russian force consisted of
Jolty Hussars (pictured in the main pic of this post) I painted these beauties in around 1995!!
Slobodski Hussars
Cossacks 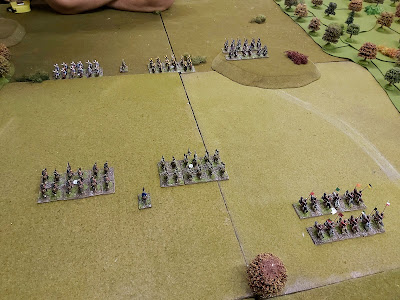 We were testing out a new set of Posties rules, so neither of us new exactly how the game
would play out. Each unit had a card, which Postie turned over, Lee declined to move first turn so it was up to me. I deliberately kept my Bosniaks back a little. 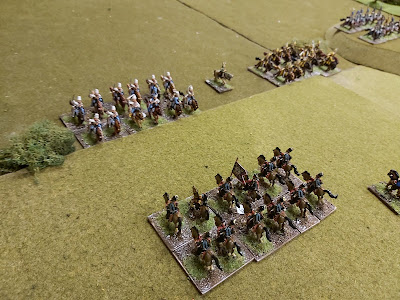 Lee declined to move again, so I moved up again, to within around 4 inches. 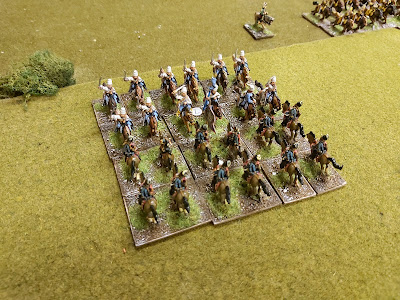 Lee's card came out next and he initiated a charge. As he hit me within half of his 12 inch move I couldn't counter charge!!! WTF! I did ask Postie about this, before I moved so close? He stills says he told me I wouldn't be able to counter charge, but he didn't! 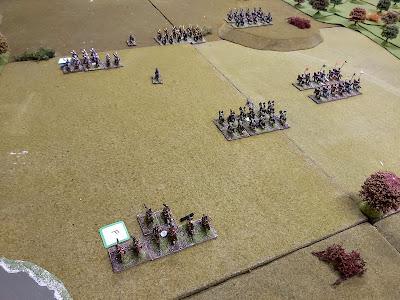 And the result was inevitable. After 2 rounds of melee, I retreated back, 12 inches plus 1 D6 and received a fatigue marker, as did the Slbodski Hussars, as we'd fought 2 rounds of continuous melee. 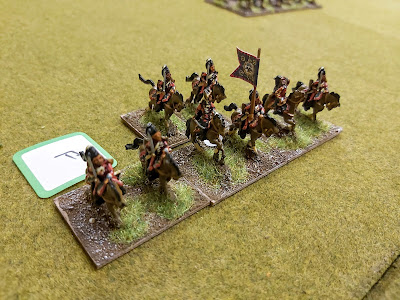 The 2nd Hussars running for their lives!!! 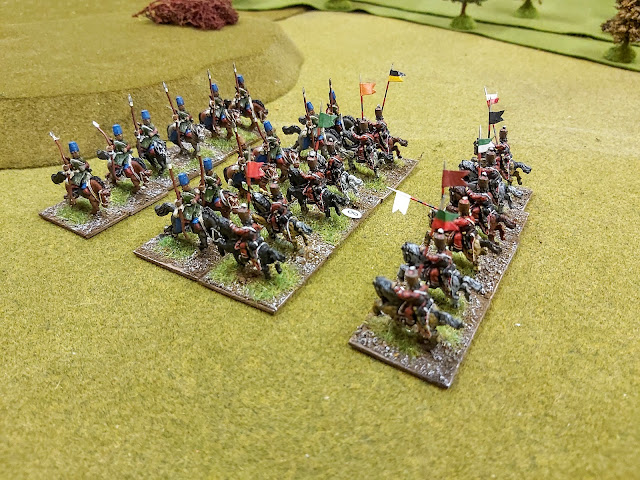 Lee's Cossack's charged and I countered once again with my Bosniaks. 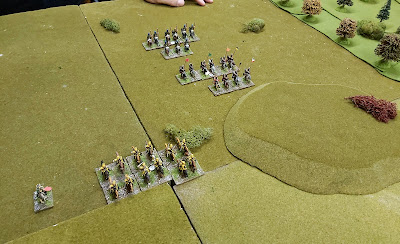 I won the melee 3-2, pushing the Cossack's back, then followed up charging again.
But couldn't quite catch them. 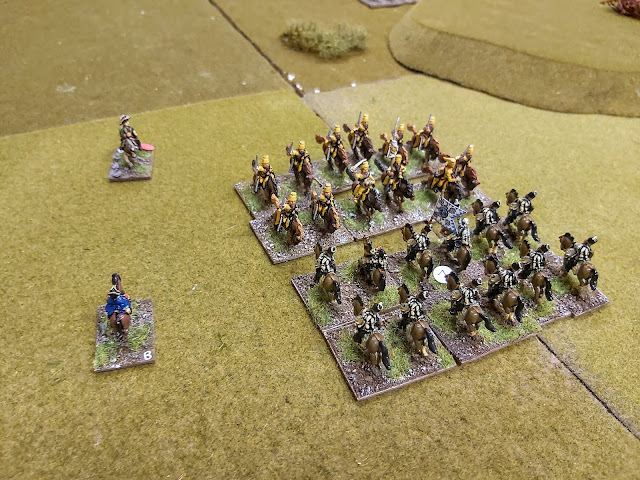 Both units managed the charge and counter in the centre. 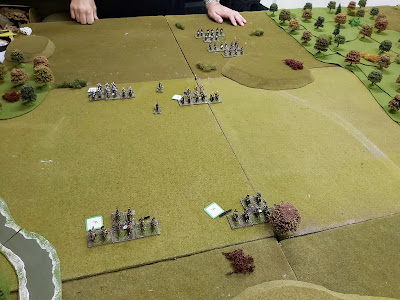 And after another 2 rounds of melee, I was pushed back again!!! 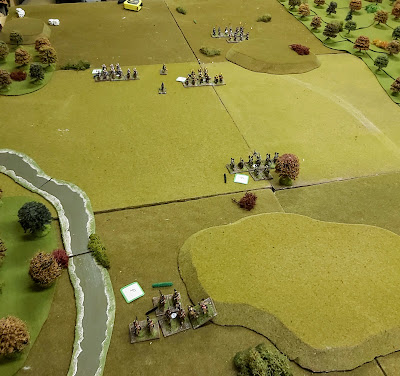 At the start of the next turn my 2nd Hussars fail their morale check and run another 12 inches back! 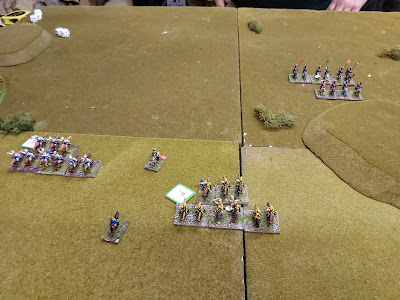 A Prussian card come out first and I charge into the back of Lee's Cossack's,
who dissolve into the countryside. 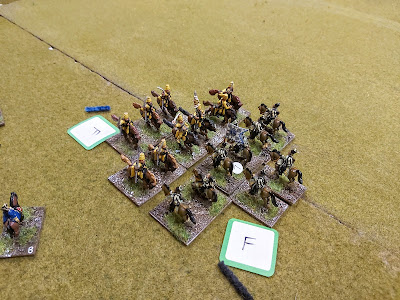 The Jolty Hussars and the 4th Hussars slog it out. 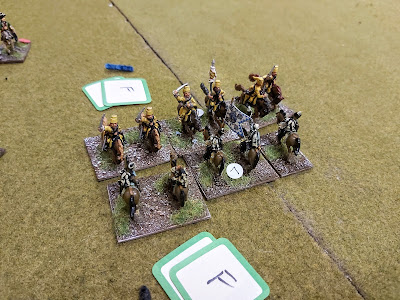 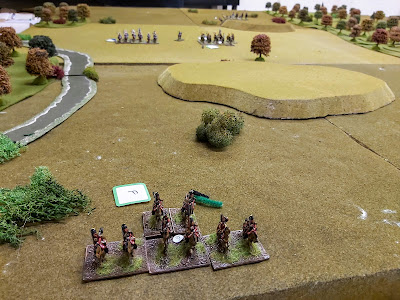 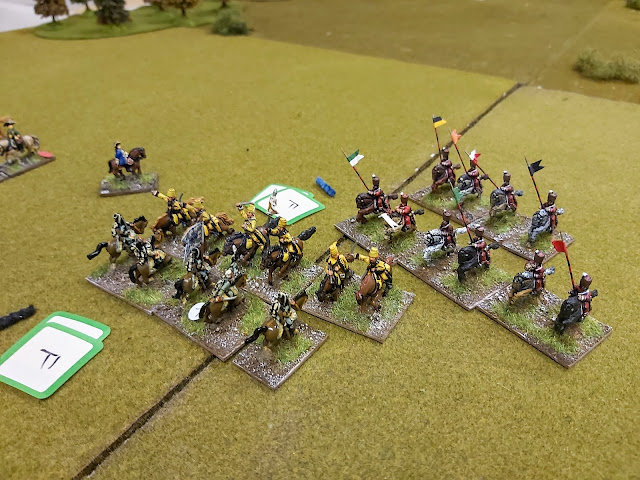 A Jolty sandwich
The Bosniaks now rid of their Cossack foe turn their attention to the rear of the Jolty Hussars! 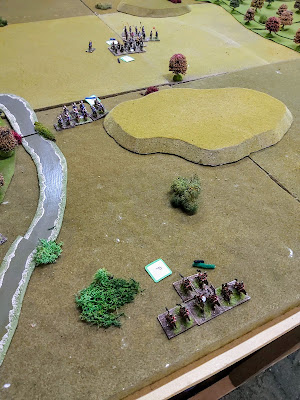 Lee abandons the Jolty Hussars to their fate and chases after my 2nd Hussars. 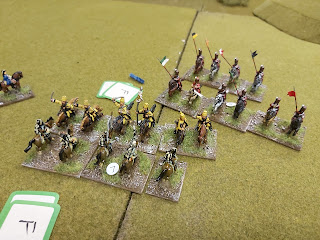 Crap dice time, I should have mauled the Russians, but it turned into a 2-2 draw
Bloody ridiculous!!! 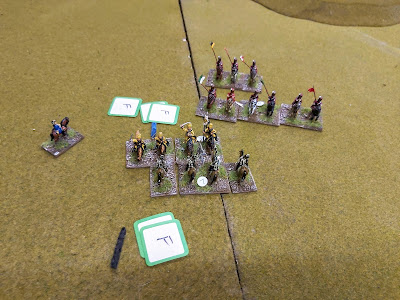 So we threw for another round of melee, each losing 1 D6 for each Fatigue marker 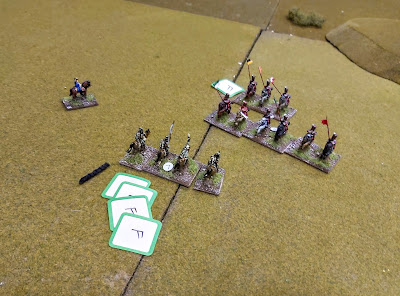 But Lee couldn't hold on, the poor Jolty Hussars were destroyed. 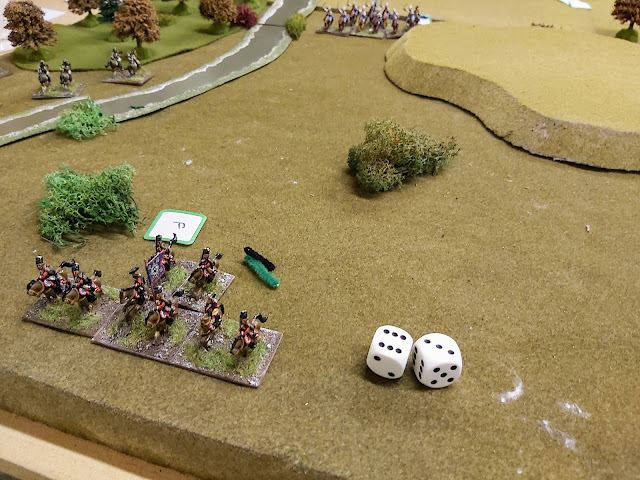 And to rub salt into his wounds I went and past the 2nd Hussars last chance morale check.
I needed a 9+ with 2 D6, and went and threw it!
heheh!
Lee wasn't a happy bunny!!! 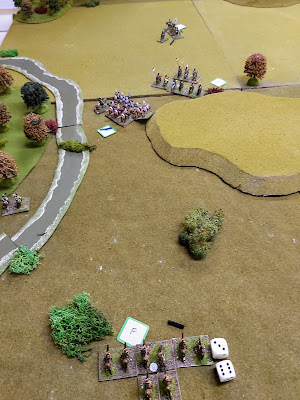 I moved the Bosniaks down to within charge range of Lee's Slobodski Hussars.
But in his turn, he about faced them. 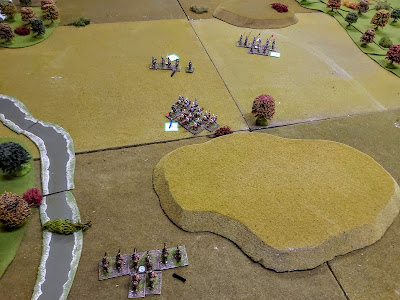 A Russian card came out first next turn, with his last unit Lee charge d the Bosniaks.
Who being skirmishers, evaded the Hussars.


And it was there that Postie called time on the game. The clock had struck 12, which meant the end of the game. I had 3 units left on the table, Lee had 1.
Postie added up the points giving me a 4-3 victory. This result would have some consequences on the next, main part of the game. But he wouldn't tell us what??? 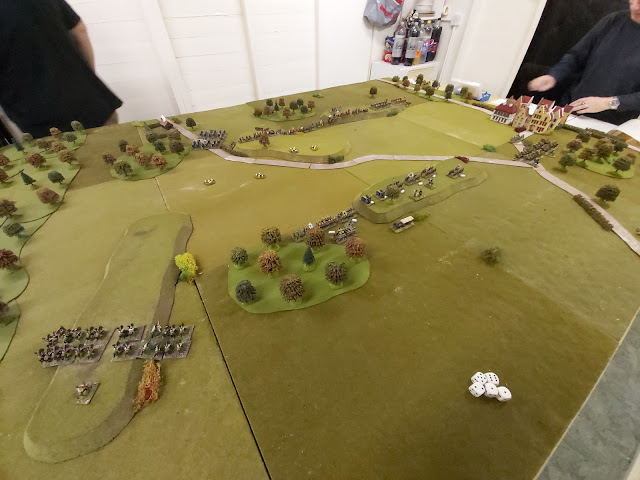