Part 7 and Finale of a Socially Distant Wargame
The Battle of Distanza, 15 June 1746
Final Phase, 1.55pm
As Big Lee and Ray send their orders and commit to a big push for victory, neither are aware that this will turn out to be the last and deciding phase of the Battle of Distanza.  Both armies are approaching points of exhaustion.  Some of the brigades and certain of the regiments have been heavily engaged since the first shots were fired.  Who will come out on top?
At the end of the last instalment the situation was as follows at about 1.55pm: 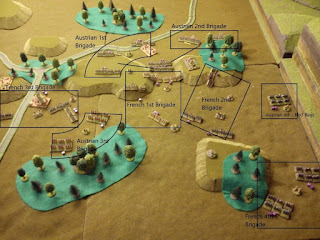 IR1 Kaiser commences by unleashing a hail of musketry which causes a tremor in the Artois regiment who just about hold firm. 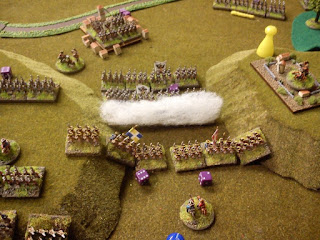 Artois and Languedoc regiments respond but their aim is erratic due to the fog of black powder smoke that drifts across the valley. 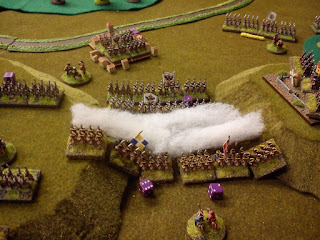 Around Sociale in the west, the French 3rd Brigade entertains with a military dance, starting with Aunic regiment dashing out of danger.  Meanwhile the, by now thoroughly exhausted, grenadiers are once again sent to attack the Central Heights.  For the Austrians, the dragoons have not been able to respond with sufficient urgency. 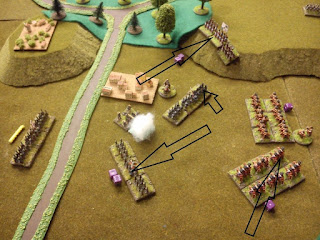 Delays in the execution of orders seems to be infectious as the Champagne regiment obey orders to counter the threat of the dragoons by making an about turn away from the approaching IR10 Jung-Wolfenbuttel. 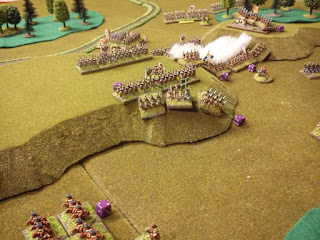 … who rather inevitably charge the very inviting rear (no Carry On Film jokes please!). 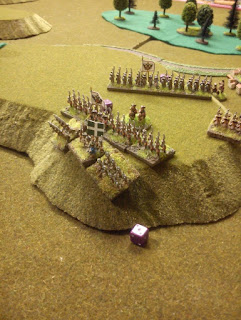 Whilst back by Sociale the Royal regiment sensibly decide to form square to deter the Austrian dragoons. 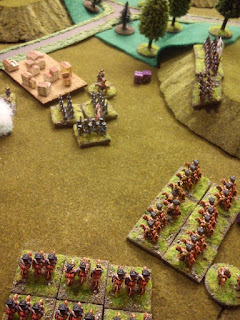 Unfortunately, the Champagne regiment have now paid the gruesome price for their tardy adherence to orders. 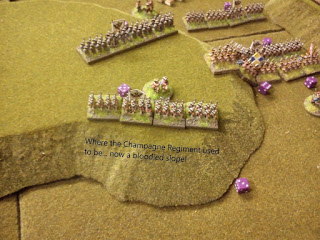 Between the Central and Eastern Heights IR1 Kaiser, emboldened by IR10’s success and its own musketry, launches itself at both Artois and Languedoc regiments.
Despite a determined resistance from the very battle weary Artois and Languedoc infantrymen, they both break.  Luckily towards their Commander in chief… will he be able to rally them? 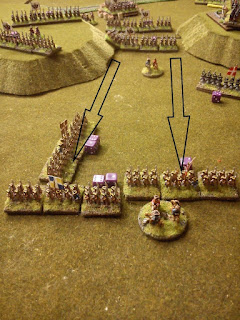 The situation at 2.10pm.  It is clear that coordinated operations are going to be increasingly difficult now the brigades and lines have fractured. 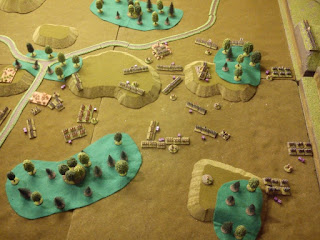 In the east it has been relatively quiet from the heavy cavalry of both sides.  For now, the pursuit by the French of the sole Austrian cuirassier unit is on.  Little do the French know that Austrian orders are to entice the French after them and away from having any part in the continuing struggle. 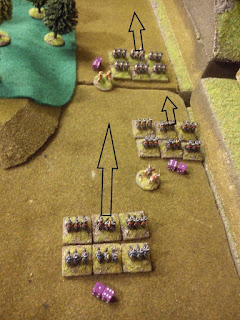 Back in the west, accurate artillery bombardment from Ray’s 3rd brigade shakes the confidence of the Austrian 6th dragoon who races back over the river to lick its wounds. 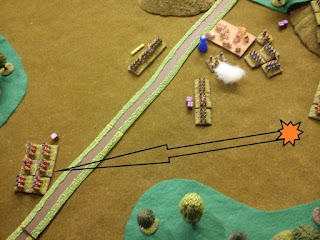 Unfortunately, the Royal regiment in square are unable to emulate their fellow gunners, and the grenadiers continue to stumble menacingly forward. 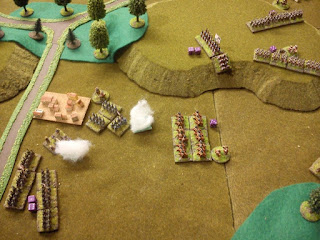 At the Eastern Heights, Clare regiment in the farm and IR1 Kaiser exchange fire, but all rather ineffectually.  I suspect musket barrels are beginning to foul with repeated use. 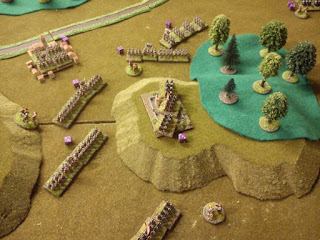 Whilst on the Central Heights the Austrian 1st Brigade manoeuvres to neutralise the emerging threat from the French grenadier unit. 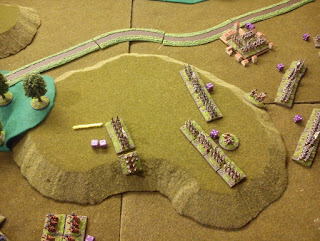 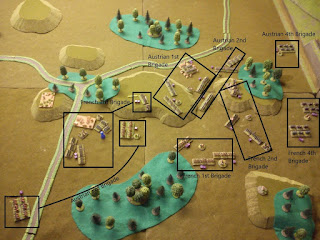 It is at this point that both armies are obliged to take army morale checks.  The Austrian morale holds.  However, French army morale collapses.  Having been asked, the Austrian commander, Lee, in accordance with the principles of wars in the Age of Reason agrees to allow Ray to retire in good order and with full honours of battle flying. 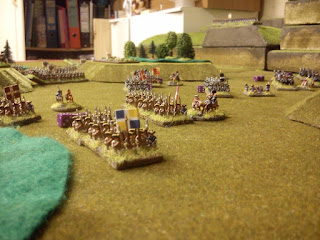 Analysis:
This has been an extremely hard fought battle.  For me there is nothing like chewing over the statistics.
With 8 out of 14 French regiments either destroyed or reduced to half strength or less, it is no surprise that morale crumbled.
The Austrian, in comparison, have 3 out of 12 regiments destroyed or reduced to half strength or less.
There have been 13 melees during the battle.  The French won 6 of them, the Austrians won 7.  Four of the melees were originally drawn, with 3 won by the Austrians and 1 by the French. 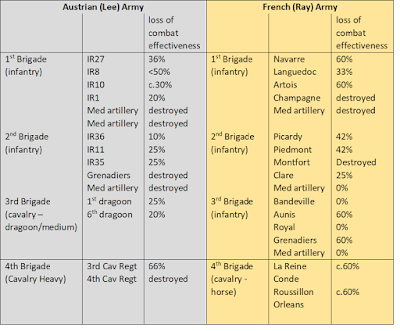 The losses go some way to show the hard fought nature of the battle, especially for the French who found themselves having to attack an opponent who had managed to early on capture the tactically important heights.
The main clash throughout the conflict was in the centre across the Central and Eastern Heights.  In this the Austrians were able to reach and deploy first.  The holding of these positions seemed to be central to Lee’s battle plan from the first and he did not deviate from it throughout.
By and large the Austrians had a plan of forestalling any French cavalry attempt to turn his eastern flank, whilst at the same time diverting the attention of the French 3rd Brigade in the west with his own dragoons.
In both these Lee seemed to gain some measure of success.  Whilst Ray had numerical superiority in infantry (in both number of units and overall men), having to divert a unit into Sociale and one onto the western farm for most of the battle stretched his line and his command radius.
More importantly, French concentration of power was problematic.  It made it more difficult for Ray to coordinate and sustain an assault on the Central Heights once his grenadiers were thrown back, even though Lee’s Austrian 1st Brigade was reeling under the pressure.  Potentially supporting units from Ray’s 3rd Brigade were either in Sociale or the wrong side of the river.
However, when Ray and the French were able to coordinate and support an attack it worked.  As seen on his capture of the Eastern Heights.  Unfortunately, as the lines fragmented command and control, and therefore coordination, became increasingly difficult for the French.  Lee also suffered but holding a central and defensive position made it relatively easier to patch the gaps.
Both generals played a superb game.  They had to take decisions and produce orders with the fog of war denying them a knowledge of the exact number of losses to units (friend and foe), the state of morale of the units nor the usual physical cues given by an opponent facing you on the other side of a table.
Each phase was a series of game turns.  Completely different to the act and react of a normal tabletop encounter.  In these senses it placed Lee and Ray far more in the position of real generals who have to rely on the equivalent of couriers and adjutants relaying information after periods of time and events.  Hats off to them.
As the umpire and mover of metal men, I had a great wargame without the stress of having to make decisions or worry about making stupid blunders – for which the Rejects are known to mercilessly mock very loudly!
Those are my thoughts.  I’m sure Lee and Ray probably have their own opinions and versions of the how the battle went.
Thank you Ray for allowing me to guest blog.  All this is too time consuming for me to ever consider doing my own blog.  Now I will get back to some painting!
Adieu
Richard


" A big thanks you has got to go to Richard for running this great campaign, its been a titanic tussle all the way through, I'm sure Lee enjoyed the game even more so, being that he won!
thanks Rich"