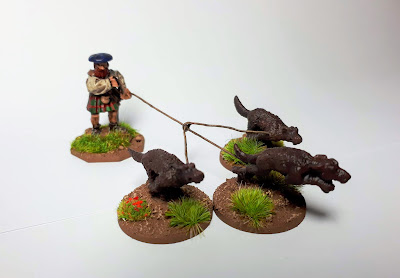 Yes I know.....more Donnybrook!
But you can never have enough of a good thing....right?
In the Highlander army list in Donnybrook, one of the characters you may use is
"The Master of Hounds" 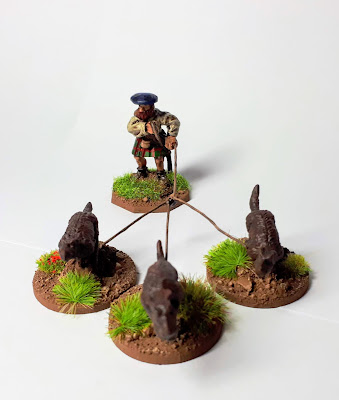 The Scots figure is a standard bearer from pack SKU : JFR20 in Reiver Castings Jacobite range.
With his left arm chopped off a repositioned.
I wasn't sure how and what to use for the dogs lead or whether or not to have one at all.
In the end I went with some plane and simple fuse wire.
Which I think works pretty well? 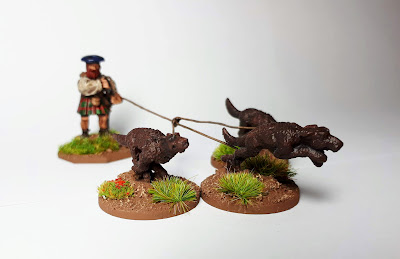 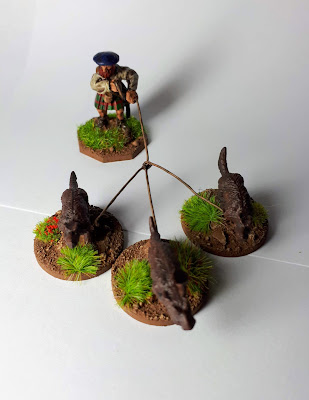 "The Master of Hounds controls a pack of hunting dogs bred by the Clan. He is armed with a short sword and controls 3 dogs. When they attack the player rolls a d3. The result is the number of dogs who lunge that turn. Add the Master to the attack. So at full strength there will be 4 attacks, while the minimum is 2. The dogs do not check morale when taking casualties and fight to the death. If the Master loses all his dogs he fights on alone.
When attacking, any dog throwing a 1 has gone wild and turns on its own side. If a Unit or Character other than the Master is withing 12 inches in immediately attacks the them. If none are present the dog turns on the Master. Enemy characters attacked by the hounds must throw a 6+ on their activation die to fight back as they may be terrified by the beast. Shooting at the dogs from any distance further than 6 inches can be done as normal but shooters re roll any hits. Dogs are a fast moving and a low profile target. Shooting at dogs within 6 inches requires the 6+ score to overcome the proximity fear but there are no "to hit" minuses. Dogs have the same ability as their Master." 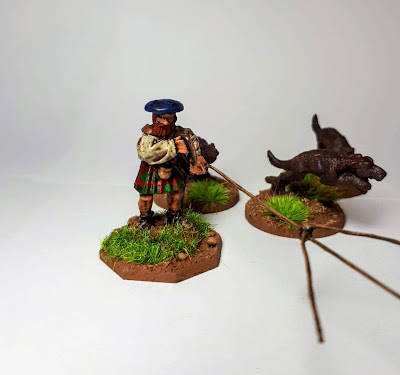 The only trouble is he looks a little lost without the dogs! 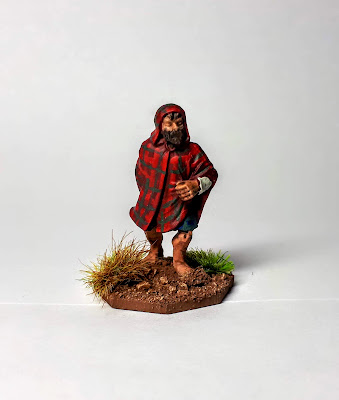 Another character in the Highlander list is the Bard. 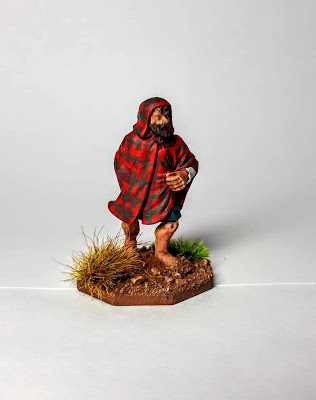 "The Bard inspires the clan through his recording and retelling of their incredible deeds and heroism. He recites before during and after the action in verse and song. He must be attached to a unit. It moves up one Ability die type (e.g: Recruit are d8 instead of d6). If the enhanced Unit fails a morale check it reverts to its original Ability level. The Bard's gifts do not affect other Characters. The Bard is armed with a sgian dubh, a silver tongue and a melodious timbre!" 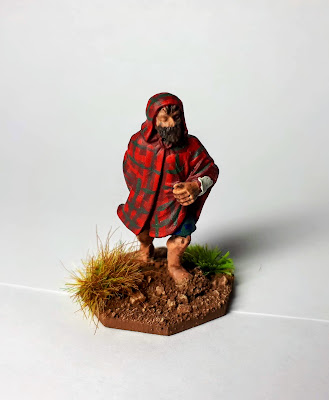 The figure is also from the same pack as the dogs, he is infact a Pict Master of Hounds!!
But I thought he'd fit the Bard character better, as he looks unarmed and doesn't look the
warrior type?? 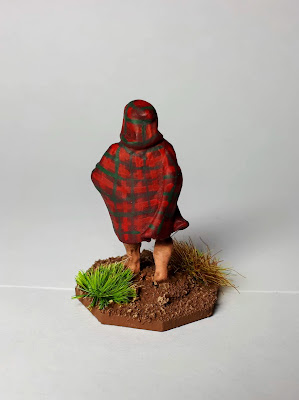 Points wise.......2 x 25mm figures is 10 points and whatever our luvvly Minon wants to give me for the 3 Hounds plus a little conversion work????