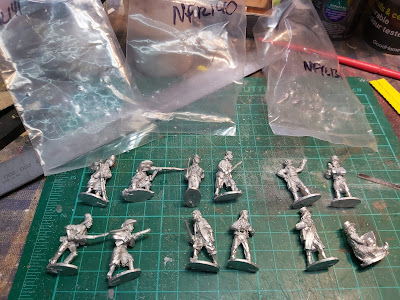 Things have slowed down to their usual pace here at Casa Rousell, what with the Painting Challenge ending and real life getting in the way.

The pubs are open as well this week, so work had been extremely busy, selling beer to all unsundry in around Kent and the South East, so there's not been a lot of painting going on. (apart from building, buildings)

Speaking of the Challenge, there were some really fantastic figures painted,  my favourite entry was from Paul Scrivens-Smith. You can see the great looking figures HERE on his blog Scrivsland.

Paul painted up some Brigade Games Scientists & Savants for his Napoleonic collection.  I commented on his post saying I loved the figures and would try and get some. Paul very kindly offered to buy them and a few other figures for me as he was coming back home to Blighty from the US, in the coming weeks. Of course I jumped at the chance!! The figures arrived late last week after Paul and his wife had unpacked all their stuff from the move.

So I just wanted to say thanks to Paul again for being a thoroughly decent chap and sorting this out for me. It always amazes me how someone you've never even met can do a kind deed for a fellow wargamer in need. Cheers Paul!!! 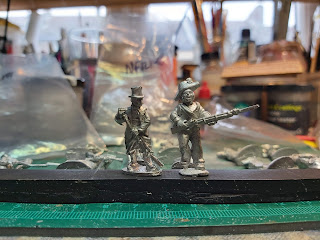 I ordered the pack of Savants and 2 packs of French Sailors, Paul warned me that the figures were a little smaller than most, but I think I can get away with it, I'll just raise their bases with a piece of MDF or a tiddily wink. 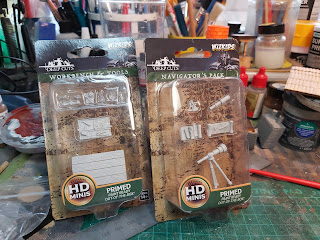 Paul also pointed me in the direction of the Whizkids telescope and other scientific equipment to go along with the figures. To be honest I'd never heard of Whizkids?
I am painting some French up at the moment, very slowly, but rest assured these will all be the next figures I paint up.
Cheers
Ray