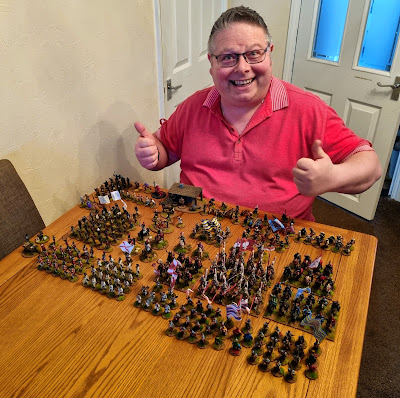 Scrolling through my posts today and I found this in my drafts, seems I forgot to post it so here it is.
Better late than never!!
I do apologise for the dodgy picture, this was the best of a very bad bunch! I think my wife was waiting for me to blink or pull an even more stupid face than this one, and that's me being normal too!!!
Anyway enough with me, this post is about what I managed to get painted after all.
When I put all the figures out on the table they looked a lot, but not so in the photo? 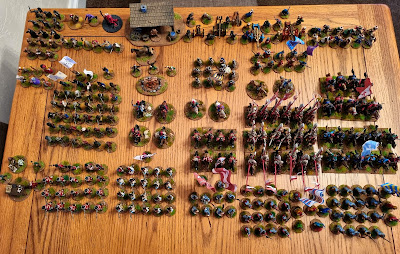 Challenge XII was a first for me, it was the first challenge were I painted exclusively 25-28mm figures. Not s 15mm figure in sight this year?
I did participate in the bonus rounds in the Challenge Quadrant and even finished at the centre. It always helps knock your points total up. Luckily most of the bonus round figures can fit into my onging projects. There were only 9 figures that don't, they will live in the box of doom, never to be seen again, or maybe I'll give them away?? 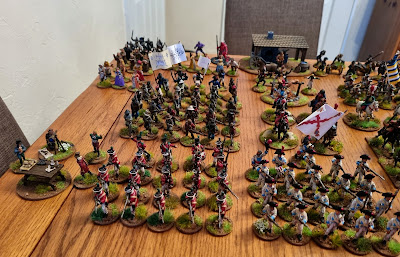 I concentrated on 2 projects this year, the Haitian Revolution above, were I painted up a Spanish unit, a Spanish Militia unit and some more dastardly rebels, as well as some Spanish commanders and Haitian Voodoo priests. 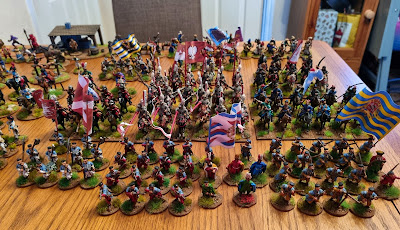 Last year it was the Ottomans, this year it was some of their foe for my Vienna 1683 project.
I painted up some Polish Winged Hussars, Pancerni, Polish Cossacks, three Haiduk regts and some commanders. Also for the Imperialists I painted up a unit of Militia, Cuirassiers and artillery.
The Ottomans did get in on the act receiving some extra commanders and their long awaited artillery.
My main aim like most challengers is to get as much painted as humanly possible, I set myself a goal of 1200 points and hoped for a top 20 finish. The 1200 mark was soon passed and changed up to 2000 points, thinking I might be able to get a top 10 finish this year round?
I did manage to pass the 2k mark late on, but ran out of time and steam and reached a total of 2168, I did late on, try to beat my total last year of 2260, but it wasn't to be. But I did get my highest placing of 7th, since Challenge III in 2012/13 where I finished 4th. So I was well chuffed with that.
So all in all I painted up
227 x 25mm foot figures
57 x 25mm Cavalry figures
Total of 344 figures last year it was (231)
Various terrain pieces and buildings
5 Boxes
Torture Cage
5 Artillery pieces
a BBQ!
a Forge
a Table
Here's my performance so far in all the Challenges
Challenge II        4940 points 1st
Challenge III       2586 points 4th
Challenge IV       1227 points 17th
Challenge V          691 points 37th
Challenge VI        681 points 36th
Challenge VII      1093 points 24th
Challenge VIII      662 points 40th
Challenge IX       2274 points 8th
Challenge X        1687 points 11th
Challenge XI       2260 points 8th
Challenge XII      2168 points 7th
I've said it before and everyone's already said it, a massive thanks to Curt, Sarah, all the Minions and all the rest of you Challengers, for all their hard work it running the challenge,  putting it all together and for pulling me along in 3 months of madness! Its been a blast and I'm already looking forward to it all starting again in 9 months!
Cheers
Ray
Posted by Ray Rousell at 16:30