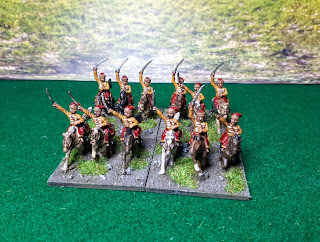 This was probably the easiest bonus round in this years Analogue Hobbies Painting
Challenge,"Mercenary"
I could have painted loads of figures for this round, I bet most of us could have?
I chose to go back to my 15mm Beneath the Lilly Banners French army. 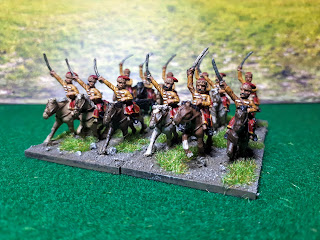 The Baron de Kronberg Hussars made their first appearance in the French army in 1692.
They had 2 squadrons and were commanded by a Hungarian in French service called Baron de Kronberg or Cornsberg. They were later in 1693 known as Mortani.
They were a shortlived unit when Kronberg fell into disgrace and left France. In 1697 they ceased to exist. 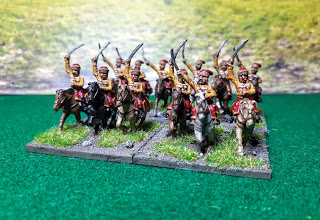 Now here's the dodgy thing, There is no information on their uniform at all.
So I made it all up!! Shock- Horror! I thought red and yellow coats looked cool and it'd be a  complete contrast to the rather boring grey coats of most
of the French army. 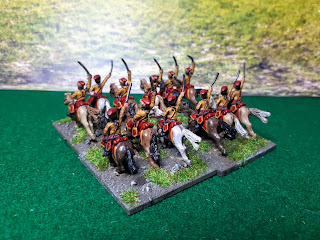 The figures are from my favourite goto for the 1690's Essex Miniatures!
This is the same unit that Sir Sidney Roundwood recently painted up in the Challenge!!!

If you'd like to vote on my or any of the other great entries, click this link!