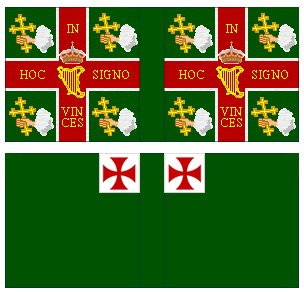 This flag can be seen in one of my previous posts on The Earl of Antrim's regt, that fought at The Battle of the Boyne, in 1690. I can't claim this one to be 100% my work. I used the flag made by Dan Harper on his blog Sixteen Ninety as a template and with a few tweaks changed it slightly. The second flag was pretty easy to make, usually the red cross is shown with no white background, but I liked Pete's idea from his blog Irish Army of James II, of adding the white background as it shows up the cross more and looks better.

So thanks again to Dan and Pete!!!

Email ThisBlogThis!Share to TwitterShare to FacebookShare to Pinterest
Labels: Battle of the Boyne, Jacobites, League of Augsburg, NYW, NYW flags