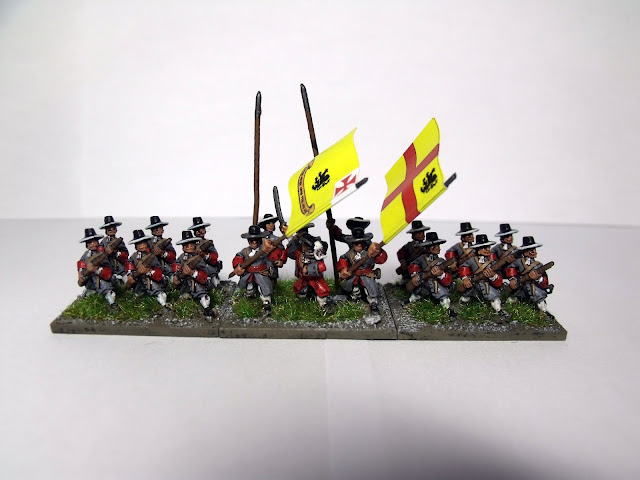 Another finished regiment for my Battle of the Boyne project, these fine looking fellow represent the Jacobite, Earl of Clanrickarde's regt of foot. Richard Burke (or Bourke) commanded the regt at the Boyne, while at the later Battle of Aughrim they were commanded by Richard's brother Ulick, who was killed in the battle.
In the army review that King James held on the 1-2 October 1689, the Earl of Clanrickarde's foot consisted of 36 Officers, 26 NCO's and 694 other ranks. Of that 694, 436 armed with muskets, 201 were armed with a pike and 44 were unarmed? The Jacobite army were organized in a rough ratio of 2 musketeers for every pikeman, so therefore, the middle stand of troops have integral pikemen, giving 2 stands of musket to one of pike. This also falls in with the ideas of both Barry Hilton and Clarence Harrison for the hopefully soon to be released Jacobite supplement to Beneath the Lily Banners.
Clanrickarde or Clanricarde as its sometimes spelt fought in Richard Hamilton's brigade and saw heavy action at Oldbidge, along with King James' Guard, the Earl of Antrim's and Boisseleau's two battalions.

The flag once again is pure conjecture, but I pinched the idea for it from a post on the League of Augsberg site, here. Thanks guys!!! Once again there is only speculation on the uniform for the regt, I've gone with a blueish grey with red cuffs, I think it looks nice when combined with the yellow of the flag. I've also given the officer figure a red coat just for the hell of it! 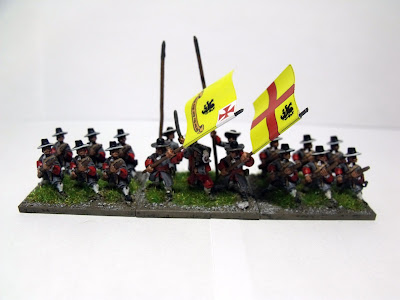 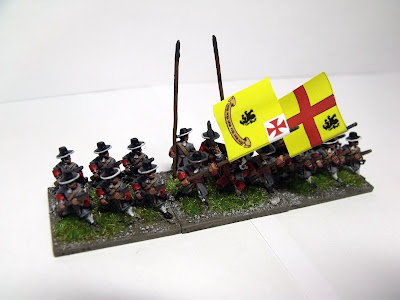 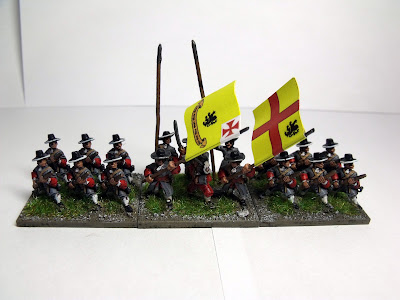