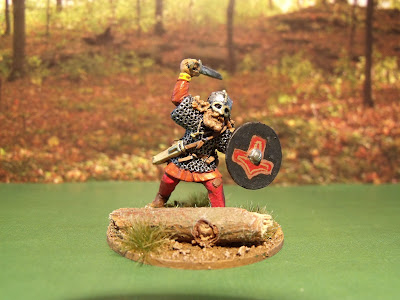 Another two items up for sale on ebay at the moment, these figures are from Gripping Beast from their Saga range. Both these figures nearly ended thrown out of the window, in a tantrum  I was not a happy chappie. I'll start he first figure, the Viking Warlord, the base of the figure was quite distorted and the figure wouldn't stand up, so out came the knife and the pliers. As a very carefully started to bend the base straight, plop! the figure broke off at the ankle! Queue lots of swearing and ranting and lots of superglue.
So I moved onto the next figure the Jomviking Warlord, I took it out of the box and started to clean the tiny bits of flash off the base....hang on a minute? where's his sword? The quick answer was still in the damned blister pack, well half of it anyway!!! Queue more ranting and raving and laughter from the Irish git in the corner.
So the next day I shoved the figure on figure fixer extraordinaire  Posties lap with an in-ordable grunt, the next day he gave the figure back the broken sword had been replaced with a fine looking axe, very nice!
So you'd think that was the end of the story but no! I'd just finished painting the Jomviking up. all he needed was a couple of coats of varnish, I picked him up to varnish him and he fell out of my hand and landed on the other axe bending it right over, I cannot repeat what I said, but I bet you can guess? I gingerly bent the axe back over, the paint cracked all over the handle then snapped off...........
Anyway, he's all fixed now.
They're both up for sale on ebay,  superglue and new weapons an' all!!!
Here's the links. 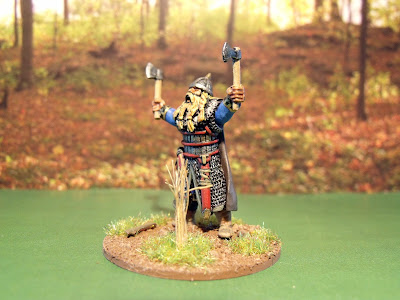