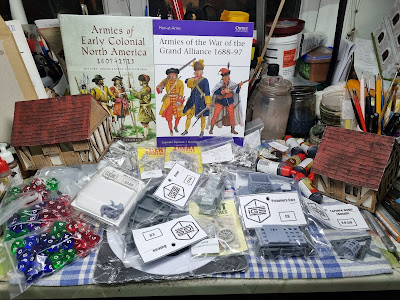 Just a quick post today, showing you my haul of goodies I picked up at SELWG the week before last.
My first purchase of the day we're the two building on either side of the pic, from the Bring & Buy for a tenner. They need a little tlc, but that shouldn't take too long. They're made from what looks like resin then glued together? Not sure who makes these? Any ideas anyone?
I've been after both of the books for a while, the Osprey was a no brainer of course and the other I've had saved on Amazon for over a year, but never took the plunge. But for £8 how could I resist?
Dice from Coritani, to add to the collection. Just need to throw them in anger now!
Army Painter Ink, I have experimented in making my own, but they just don't seem to match the quality for AP....sigh!
Lots of scenery items from Iron Gate Scenery.  I won one of their building a few years ago, in a competition and have been watching there ever expanding ranges grow. I bought a boat, a prison wagon and a forge set amongst other things. So look out for them in the Painting Challenge in December.
I bought some Reiver Castings figures from Rob at Northumberland painting Service, some Austrian Cuirassiers for my Vienna project using Donnybrook (as if you didn't guess?) I meant to buy some Grenadiers as well, but it completely slipped my mind? Must be getting old?
Finally I was a bit miffed with Warlord Games, they who along with Skytrex are now selling Trent Miniatures after the sad passing of Duncan McFarlane. They had a few packs from some of the ranges up for sale, so I picked up a four packs and nearly fell over when told the price. A pack of 8 figures had gone up £4!!! "The price of lead has gone up" the trader explained! I had to stop myself from saying "well you know where you can stick them then don't ya?"
But after I'd calmed down, I had to go skulking back and buy some of the original packs I'd picked up, because I needed these to match in with units I've already got.
Obviously I do understand that the ranges had to be bought from Duncan's estate and then made, but a 35% price hike is taking the pi$$!
I do need a few more packs to finish off the units I have already, but will have to seriously think about expanding the armies anymore after that, which is a shame.
Moan over!
Posted by Ray Rousell at 10:57