Guest Post from Reject Richard - The Battle of Distanza

A Socially Distant Wargame
A Fictitious Austrian War of Succession Wargame
The Battle of Distanza, 15 June 1746

When I started doing this Ray asked me to do a guest post on his blog.  So here we go…

There is nothing more sociable than gathering around a gaming table with good friends in order to test our wits against each other and to enjoy great conversation (all of us Rejects), have a good laugh (again, all of us) and to win a hard fought battle (most of us, but seldom Big Lee).

Whilst Covid-19 forces us into social distancing and for many a chance to reduce a metal mountain.  It has also temporarily swept away our opportunity to meet and game.  Who knows when us Rejects will gather in Posties shed next and enjoy those egg mayonnaise sandwiches to the tune of clattering dice that herald the death of some unit somewhere on the table – usually Lee’s due to his appallingly consistent bad rolling.

So, with this in mind, I decided to use the simple means of email to bring together at least some of the Rejects in order to play a socially distant wargame.  For this I co-opted Ray and Lee as the players while I provided the game and to umpire.

The premise is simple.

Hopefully, this allows Lee and Ray to act us the generals commanding – thinking carefully about the clarity of their orders, because I will have to execute what they have sent.

There you have it… clear as mud!

The action will take place on a 4x4 foot space on my table in my cellar.  Lighting’s not great, so don’t expect gallery quality pics.
The figures are all 6mm Baccus miniatures.
The rules that I am using are Koenig Krieg.  I could use Black Powder, which would work well with written orders.  However, I went for Koenig Krieg because it’s initiative and therefore action/movement is more unpredictable in it changing from one side to the next within a turn.

Now I just need to get the background and deployment information to the fledgling generals.

Background to the Battle of Distanza, 15 June 1746

This is a fictitious battle and any resemblance to real people or events is entirely coincidental.  Here goes…

In response to spreading Austrian influence in Northern Italy, France has entered Piedmont to protect the alpine passes and to eliminate the force that threatens to envelope all of France.  The Empress, Maria Theresa, however, sees an opportunity to go beyond consolidation of control in Lombardy.  So, each commander must now seek to destroy the effectiveness of the other on the plains of Piedmont and Lombardy.

It is 11am and the Austrian and French armies having been circling each other for days.  Both forces are evenly matched but not identical.  So, they have been trying to outmanoeuvre the other in order to gain a battlefield advantage.

The area around which the opponents have been marching is set out below. 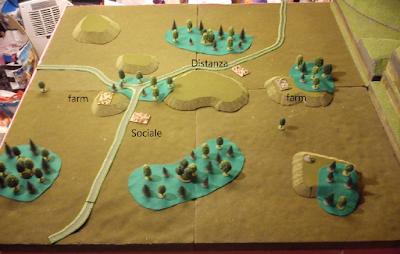 Both the Austrian and French armies consist of four brigades.  These will all start in march column.

None of the hills impede movement. Entry into woods should be avoided.

The villages of both Sociale and Distanza can be occupied by one infantry unit each.  The farm complexes can be moved through and deployment across without impediment.  Artillery can be deployed alone in the farms and will get some protection.

The rivers are fordable along their whole length but crossing them may (or may not) slow movement.  Defending on a riverbank defers advantage in melee but not defending in a river.

Victory Conditions:
The aim is the destruction of the enemy’s ability to engage in offensive action and therefore force them to retreat.  This is based on breaking the opponent’s morale through the destruction of units (artillery does not count).

So next up… deployment.