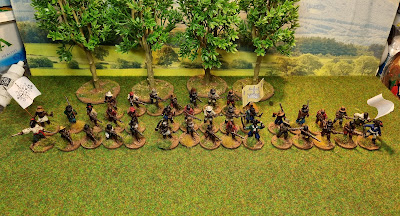 Its back to the Haitian Revolution once again.
These 38 25mm mainly Trent Miniatures we're started last month and painted alongside all the figures I've posted so far and some not yet seen! 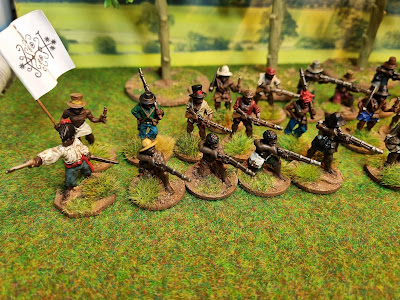 3 of the units are made up of 8 figures with a Commander and standard bearer.
The commander figure started out in life as a Wargames Foundry Pirate and in true French Revolutionary style, had his head chopped off and replaced with a suitable bicorned head from Trent.
There isn't much info on what kind of flags the Rebels/Slaves would carry, if at all?
But I wanted them to have some anyway, this one is the Voodoo symbol for Papa Legba,
Papa Legba is a lwain Haitian Vodoo, who serves as the intermediary between the lwa and humanity. He stands at a spiritual crossroads and gives (or denies) permission to speak with the spirits of Guineé, and is believed to speak all human languages. In Haiti, he is the great elocutioner. Legba facilitates communication, speech, and understanding. He is commonly associated with dogs. Papa Legba is invoked at the beginning of every ceremony. Papa Legba has his origins in the historic West African kingdom of Dahomey, located within present-day Benin. 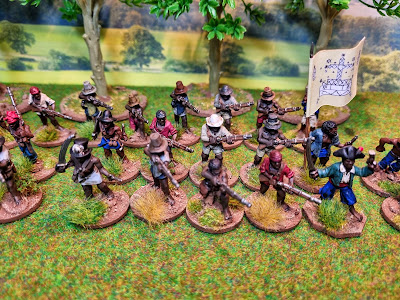 Exactly the same as the unit above, all are Trent minis expect the Commander, who again is a Foundry Pirate with a Trent mini head replacement. The standard is the Voodoo symbol of Baron Samedi.
Baron Samedi (English: Baron Saturday), also written Baron Samdi, Bawon Samedi or Bawon Sanmdi, is one of the loa of Haitain Vodoo. He is a loa of the dead, along with Baron's numerous other incarnations Baron Cimetiere, Baron La Croix and Baron Criminel.
He is the head of the Gede family of loa; his brothers are Azagon Lacroix and Baron Piquant and he is the husband of Maman Brigitte. Together, they are the guardians of the past, of history and, heritage. 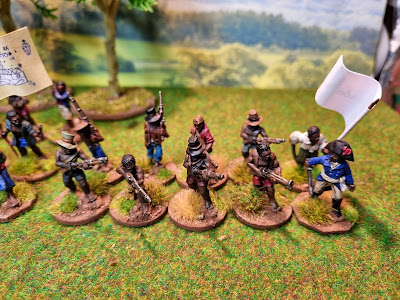 The third unit are all Trent miniatures, the commander is from their Vendee range and is infact Jean-Niclas Stofflet a Vendee Rebel Commander.The figures looked so good I didn'r want to chop his head off, so just painted him with brown skin instead. The standard is pretty simple, its a white flag with the word Liberte, on one side. 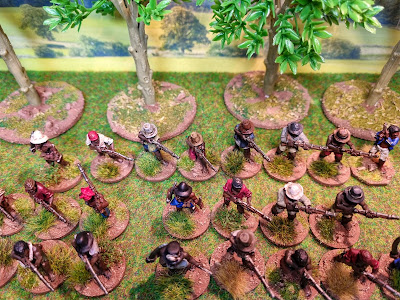 The last 8 figures, no command or flag for these poor chaps!
Well ok, there is, I based the chap on the right up as a spare commander, but he can be thrown in at any time to make up units of 8. 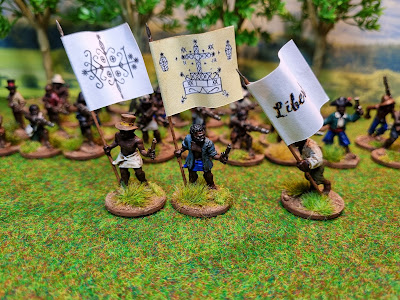 A close up on the flags, thanks gawd for Microsoft Paint! 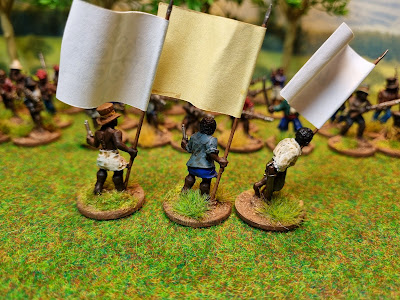 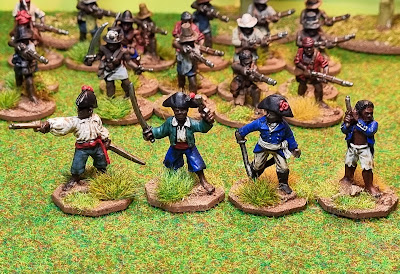 A close up on commanders. 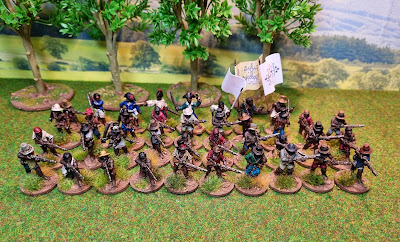 And the lot squashed together, from the front.. 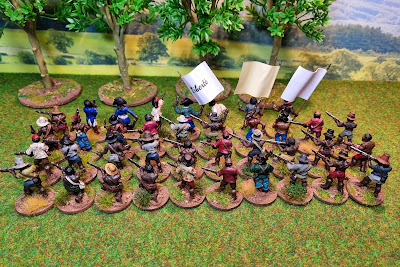