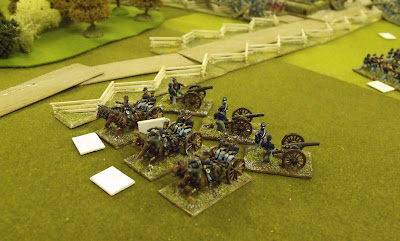 As both myself and Ian (with his dodgy knee) are off work last week, Postie did us another game. Ian asked for an ACW battle and that's exactly what we got. Once again I took far too many photos, for some reason most didn't come out, so this report will only have the one part with too many pictures!!
To start we had to chose sides, I got the Rebs and Ian got the Yankees. The troops were already set on on the table in march column, Postie gave us both one instruction......to attack. Points would be given at the end of the game for every unit over the enemies side of the table and points taken away for your troops left on your side of the table. There were also ten numbers in random places on the table, on roads, behind hills and in woods, Postie wouldn't tell us what they were?? We used Fire and Fury rules for the game, which we all love and hate at the same time. The thing is with the rules you can have the tactical genius of a mushroom and as long as you throw high on the dice your gonna win! Lets hope I still love them at the end of the game!!!! 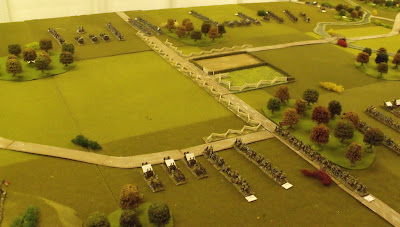 The Confederate left of the battlefield 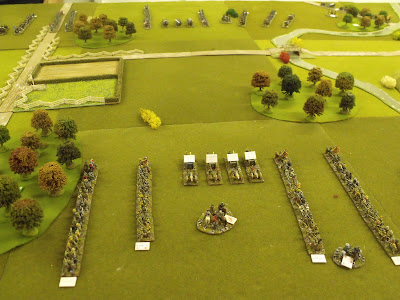 And the right, both initial setup.

Turn 1
Ian won the dice off to decide who moved first, he let me go first as he knew as the Confederates I'd try and get into a fight as soon as I could. The infuriating part of the rules is you have to throw to move each unit, anything above a 6 or 7 and you'll be fine, so guess what my first roll was??? ...........a bloody one!!!! which very luckily meant a half a move for the  3rd Tennessee. After advancing all my units, Postie asked me to throw a dice, I threw an 8, and blow me down I got my re-enforcements on first turn on the Yankee flank, yeehaa!!!!! A regiment of Alabama Cavalry.
Ian also threw a 1 on his first die roll, which made me feel a whole lot better!! He set up very defensively and changed formation not advancing at all, he did though turn a unit to face the cavalry now on his flank. 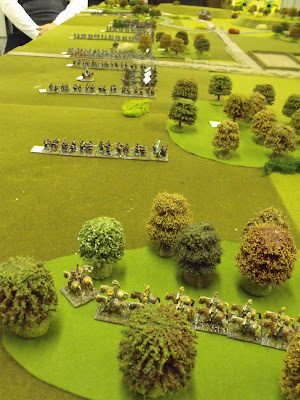 The Alabama Cavalry arrive, on the Yankee right, the
1st Wisconcin turn to face them. 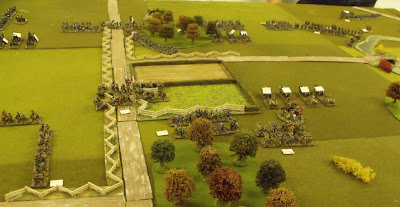 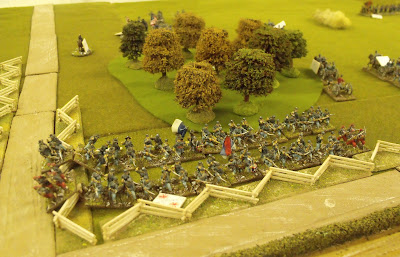 The 3rd and 1st Pennsylvania form a defensive line behind the fencing.
Turn 2
The Confederates move up all along their lines, for my first throw I chose the 3rd Tennessee as I did last time and would you believe it I threw a 1 again!!!!!! The Alabama cavalry who are still in column charge the 1st Wisconsin  who were severally mauled in the attack losing 14-1, they lost all but two of their stands and retreat back in disorder. Ian then threw a 10 for his artillery fire, damaging one of my batteries. No re-enforcements for Ian this turn, he he!! 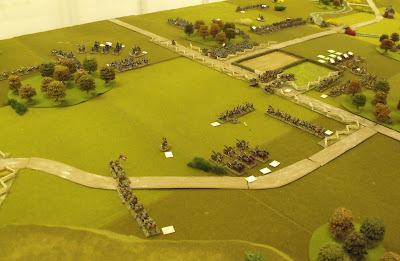 The Confederate advance, the double one unit the 3rd Tennessee can be
seen on the left in column still and at the top left you can see the
Alabama cavalry smashing the 1st Wisconsin. 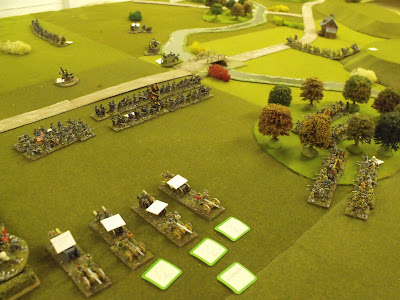 The right of the field, you can see the damage markers on my artillery, Ian
threw extremely well and half destroyed one gun and pushed three of them back. 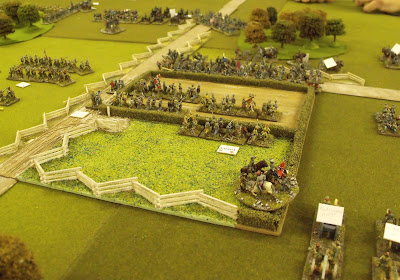 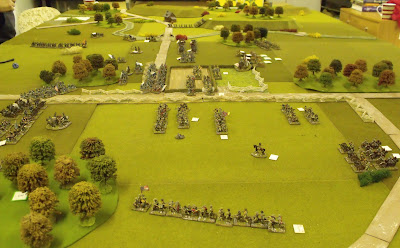 The table at the end of turn 2
Turn 3
Another bad first throw for the Confederates, this time the previously victorious Alabama cavalry refuse to change formation or move!!! So seeing his chance to turn the game back in his favour, Ian moved up and charged the cavalry with the 4th Wisconsin. The cavalry were beaten 5-3 and pushed back.
Turn 4
The charge turn!!
The Confederates attack in the centre, the 1st and 2nd Alabama charge the 3rd and 1st Pennsylvania and are pushed back. The Alabama cavalry are charged again by the 1st Wisconsin and lose again 13-11, this time they're pushed back into the woods where they started from on turn 1. The herioc leader of the Alabama cavalry loses his life in the fight.

The centre of the field. 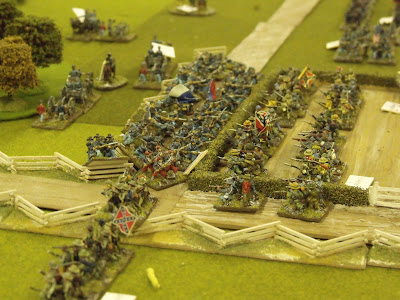 The 1st and 2nd Alabama charge the 3rd and 1st Pennsylvania. 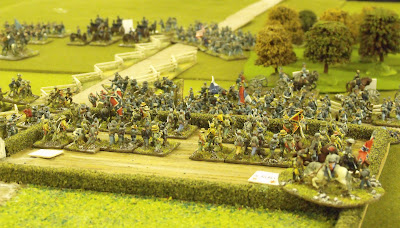 Another shot of the melee. 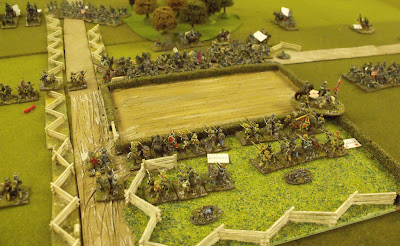 And where they were pushed back too. 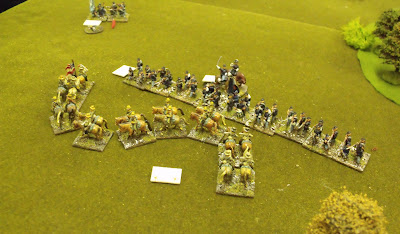 The Alabama cavalry, getting their butts kicked. What a nice snake pattern!!!
Turn 5
The last turn of the game, the battle was going my way but this turn it turned against me big time!!
The 5th Alabama charged the 4th New York, for its fire Ian threw a 10....Shit!! I lost 3 stands going in, that's a minus three in the oncoming melee!! Luckily I threw a 9 to Ian's 4 , But still lost the melee 6-5 so I was knocked back. In the next charge the 1st and 2nd Alabama charged again into the 3rd and 1st Pennsylvania, and once again that GIT Ian threw a 10 for firing, with the same effect I lost 3 stands, once again a minus 3 in melee, which I lost again 9-6 and was pushed back.
In Ian's turn he was like a man possessed, charging across the board......... 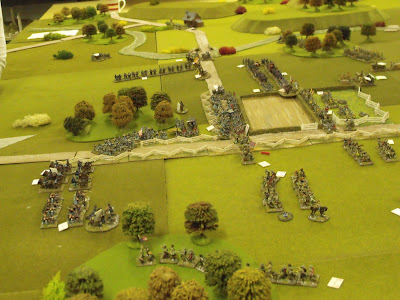 A shot down from the left of the field. 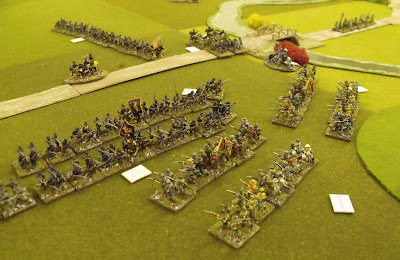 The 3rd and 4th New York are charged by the 5th Alabama,
Ian threw a 10 and knocked 3 stands off. 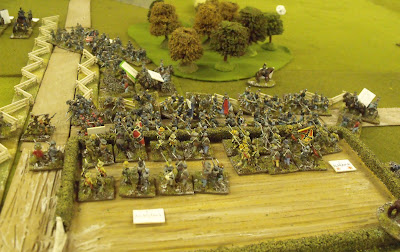 The unsuccessful Confederate charge in the centre. 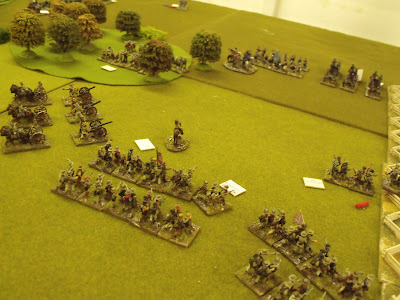 My turn to try and form a defensive line. 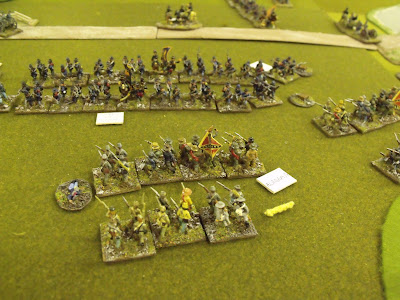 The 3rd and 4th New York charge the 5th Alabama, Ian threw a 9 while
I threw a bloody 1!! This is where my blog gets its name from , this damned game!!
Remember whatever you do "Don't throw a 1" 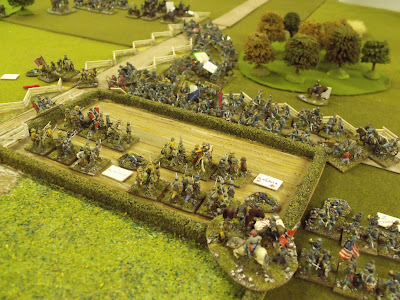 The Federals getting ready to charge over the hedge. Only to be
knocked back by the only 10 I threw all game. 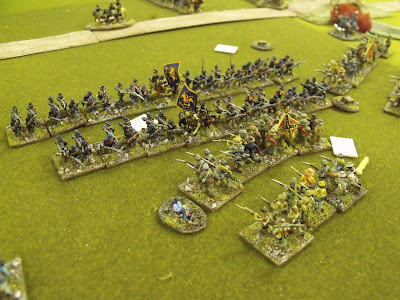 As above - The 3rd and 4th New York charge the 5th Alabama, and
follow up to hit the artillery, that you can just see at the bottom left. 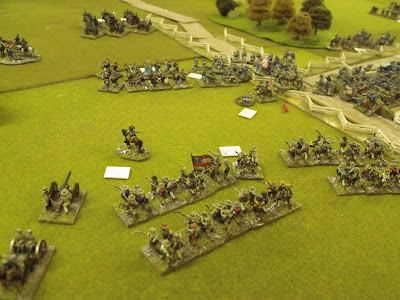 On the left, the 4th Pennsylvania charge the 2nd Tennessee on the T-Junction,
I give up!!! Ian throws another 10 to my 2. The 2nd are destroyed to the man!! 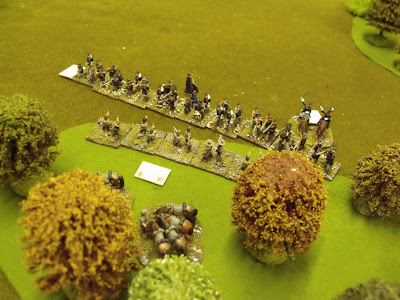 The last attack and a little payback for me, Ian charged his 4th Wisconsin
at my now dis-mounted Alabama cavalry. I threw a 9 to Ian's 1.
The Wisconsin boys retreated disordered and had there leader captured.
By now I'd given up the will to live all them 10's really killed me, so I
retreated off the field in order, ready to fight another day. 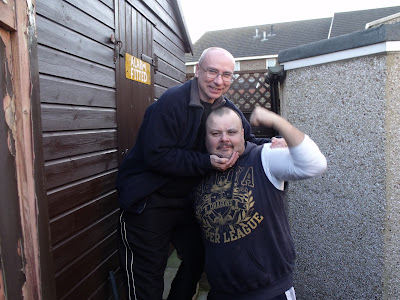 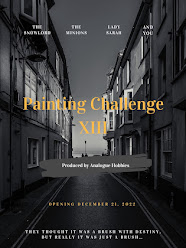