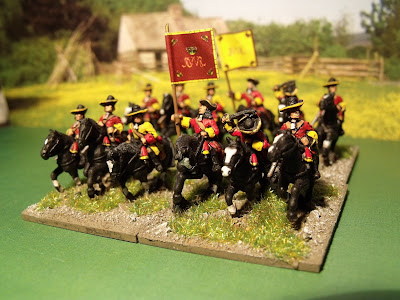 These chaps earned me 52 points and were my 2nd entry into this years Analogue Painting Challenge over on Curt's blog. They move me up to 18th place, I've said it before and will say it again, Its going to be a hard slog this year and I think I'm going to be lucky to make the top 10 let alone the top 5! I'm already 499 points behind the leader James, that's a hell of a lot of 15mm figures I've got to paint just to catch up!!!
Anyway.....


Sir John Lanier's Horse or The Queens regt of Horse. Later they were known as the 1st The King's Dragoon Guards., then tranferred to Flanders were their commander was killed at the Battle of Steenkirke in 1692.
Lanier's were raised by King James II in 1685 to help curtail the Monmouth rebellion. The first duty of Lanier's new regiment was to escort a prisoner the Duke of Monmouth from Winchester back to London after the battle of Sedgemoor in 1685.
They were present at both The Battle of the Boyne and The Battle of Aughrim in Ireland.After the Irish rebellion they were transferred to Flanders. In November 1691 the Commons mentioned the regiment by the name of its commander Sir John Lanier. Then In November 1692 it was known as the “Queen's regiment”. On 3 August 1692 Lieutenant-General Sir John Lanier was mortally wounded in the battle of Steenkerque, not long after he died of his wounds
On 10 August 1692 Henry Lumley (younger brother of Richard Lumley) was appointed as colonel over this regiment. Under his leadership the regiment distinguished itself in the Battle of Neerwinden  also known as Landen in July 1693.
The figures are from Essex Miniatures, the bases are from Warbases and flags by my good self!! 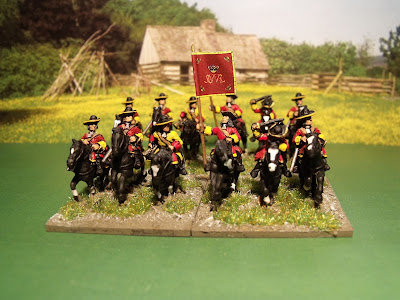 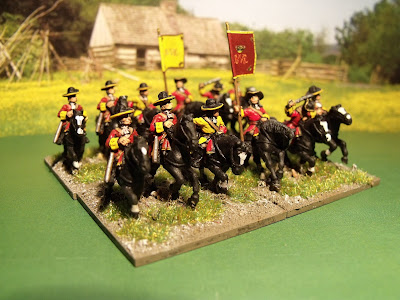