﻿Over the past 6 months I’ve painted quite a few figures; unfortunately most of them don't belong to me. They belong to my megalomaniac mate Postie, who has a figure collection to die for. I've taken a few photos of some of the units I've painted and will be posting them from time to time.
The first unit in question are the Bremen and Verden Hussars, commanded by Colonel Bussche, they were part of the 1st Hanoverian Brigade commanded by Colonel Albrecht von Estorff, during the Waterloo Campaign of 1815. The Breman and Verden Hussars were not present at The Battle of Waterloo; they were posted on the Allied right flank, at Hal, 13 Km from Waterloo, under the command of Lt/General Lord Hill 2nd Corps. The Brigade also included the Prince Regent’s Hussars and the Duke of Cumberland’s Hussars. The Duke of Cumberland’s Hussars were detached and were present at the battle, as the French cavalry advanced towards them they turned tails and fled back to Brussels. Later after the battle their commander was discharged from service.
The figues are 15mm Essex Miniatures and are based up to Posties version of General de Brigade. 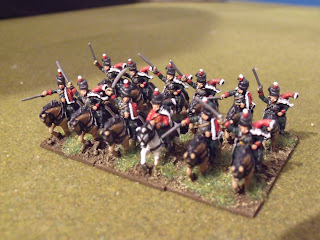 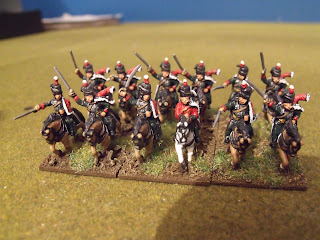