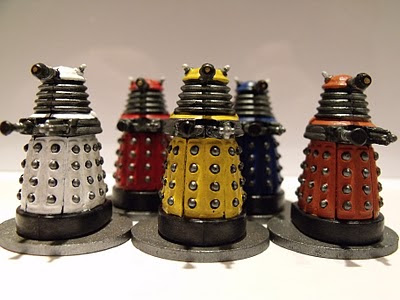 My mate Keir is a Dr Who freak, he brought in some of the unpainted Daleks that he got free with a Dr Who magazine, the one's that we've all seen floating around various blogs over the last couple of weeks. As I painted up the Tardis for him last year he asked if I could paint the 5 Daleks above, they looked quite easy so I agreed. How wrong was I?? Tthey took ages to get finished, the silver dots were the problem, to paint the main colour I had to apply several thin layers of paint to each figure, to stop the paint clogging and cracking around the dots. Then I painted the dots black as per the photo I'd found on a Dr Who website, only for Keir to have stroppy meltdown saying that the dots were supposed to be silver, sigh!!!!
He also has a Dr Who figure, from Heresy painted by my good friend The Angry Lurker, as well as the Tardis, which both are based up, so I had to figure out how to base them, after several false starts I went with the spacship floor look, which is just Vallejo Gunmetal Grey, but I think it looks quite effective.
Also while I was just finishing the last Dalek, I had a request from Keir's wife Susan, could she have her own purple Dalek!! Out came the paints again!!! So we have the very first girlie Dalek, who looks ravashing in her purple gown. 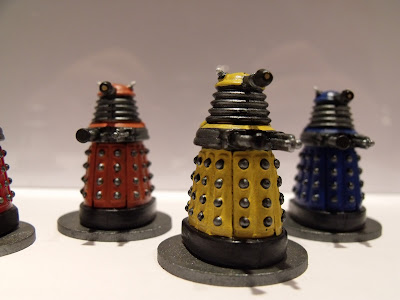 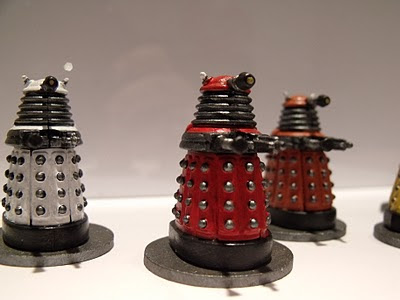 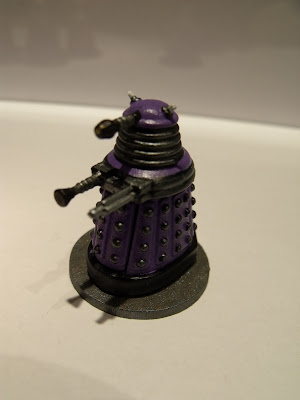 Email ThisBlogThis!Share to TwitterShare to FacebookShare to Pinterest
Labels: Dr Who