The Angry Lurkers Zombie game No2 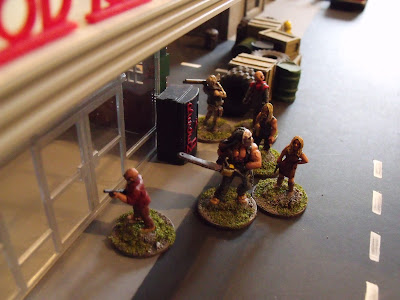 After most of Posties Rejects had spent all their hard earned dosh at Cavilier Wargames show at Tonbridge on Sunday, we all headed for Fran's, (The Angry Lurker) for game No2 of his Zombies. Now Zombies aren't really my thing, I like watching Zombie films, but that's as far as it goes, I didn't really want to play any games, much like the majority of the Rejects. We are more into the historical side of wargaming, painting and playing historical battles throughout history. When Fran said the Z word we all sighed and even shivered a little. Like the scene in Jaws, when Quint, (Robert Shaw), scratched his nails down that blackboard. Anyway I must officailly say that I and the others all really enjoyed the first game we played a couple of weeks ago, (cough, cough... bad taste in my mouth, cough, cough).
So onto Zombie game No2, the four players, myself with the gang from the film Devil's Rejects, Big Lee with Big Willie and his Bad posse, Richard with his ex-cops and Postie with us, all characters named after us!

Fran the GM, gave us the heads up, Four seperate groups had heard an anouncment over the radio, that bought them to the city, but he didn't tell us it was a trap, set up by the US miliatary as an experiment. We had to search the building for goodies such as food, medicine, ammo and fuel. All the while trying to be quiet so not to attract any Z's. Poor Richard undid 2 containers to look for some goodies but all he found was a zombie horde in each, he was quickly overwellmed and lost 2 characters, of couse this made us all chuckle. Then it was my turn, do I open the container near me, well I had to, no goodies for me either, I got a zombie rager horde that moved quicker than my figures. I killed a few ragers but in the end I also lost 2 characters, including my leader, what a great start. Meanwhile Lee and Postie were cleaning up all the tokens, collecting loads, while me and Richard were fighting to stay in the game.
﻿

The game started to go a little wrong for Lee and Postie next turn, they both triggered a Zombie generation point. After searching in a tent above a generation point appeared right by the red chair, this in-turn frightened Willies posse so after firing a few shots and killing a few Z's, they beat a hasty retreat to a military looking building with the zombies in hot pursuit, now comes the sad point, the zombies then got 3 goes on the trot a melee insued and Lee lost his first caualty. Poor Darren, had his throat bitten just after killing a lone zombie dying instantly.

Postie on the other hand opened up a massive can of whoop-ass, he opened the door of the diner and 7 zombie dogs came tearing out, this also triggered a generation point behind him. He was in big trouble, contacted by dogs to the front, Z's behind. Postie then made us all sick as he won every single melee, part due to GW Fran's absolutly usless dice rolling.
Meanwhile Richard lost another figure, as he tried to get clear of the oncoming Z's. As for me I was running through the hospital trying to get out of the way of the ragers that were hot on my heels breaking down the door I had locked.

﻿
The last of the Ragers spotted Posties 2 figures and chased after them instead of me, pheew!!  Postie did his usual though and killed them all but Doc, one of his figures got bitten and infected. I run off to some ruined buildings looking for plunder, which I can't find as it's on the 1st floor. The only way up to the 1st floor is using the ladders which are leaning against the diner and way back where Postie started. So I had to leave them.


﻿ After ﻿Lee's Big Willie posse entered the building they barred all doors and locked themselves in, which the Z's didn't agree with. Another generation point was activated just outside the roller shutter doors, the Z's could smell flesh and tried unsuccesfully to break down the doors, meanwhile Lee searched the building and found more goodies, he also foun a live computer system. A message was sent to him that a US army team were on there way to extract his posse. Yipee they were saved, No! Fran then informed us about the Military experiment and whoever activated the computer would then be flown off and have needles poked everywhere you don't want needles to poke, goodbye Big Willies posse.
Meanwhile on the other side of the town I entered another building and found nothing, great! All the glory was still going Richard and Posties way. Richard entered the other side of the diner that was now empty of zombie dogs and found some loot, while covering his rear as the Z's still advanced. Postie held his own and killed everything that came his way.