Right that's enough of the fantasy side of the sport, lets get back to the Historical side of gaming. Hooray I here some of you shout!!
As the title suggests I've posted two more flags for Scottish army of James IV.
The first flag belongs to Adam Hepburn, 2nd Earl of Bothwell who was a Scottish nobleman, who succeeded his father Patrick Hepburn, 1st Earl of Bothwell in 1508. Prior to that, he was known by one of his territorial designations, Adam Hepburn of Crags.He married in 1511 (her first of four husbands) Agnes (died February, 1557), the illegitimate daughter of James Stewart, 1st Earl of Buchan by Margaret Murray. This Agnes Stewart was provided with Letters of Legitimacy, confirmed by Queen Mary of Guise, on 31 October 1552, under the Great Seal of Scotland.
The Earl of Bothwell was killed at the Battle of Flodden, where he commanded 5000 lowland conscripts from the Lothians, the forest of Ettrick and the boder burghs of Gallasheils and Selkirk which made up the Scottish reserve.
The second flag is that of Clan Mackenzie who were I believe led by John Mackenzie, or "John of Killin", traditionally reckoned 9th of Kintail, who was a Highland chief, and head of the Clan Mackenzie. The Mackenzies fought on the right of the battle which was commanded by the Earls of Argyle and Lennox. 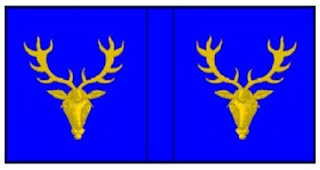