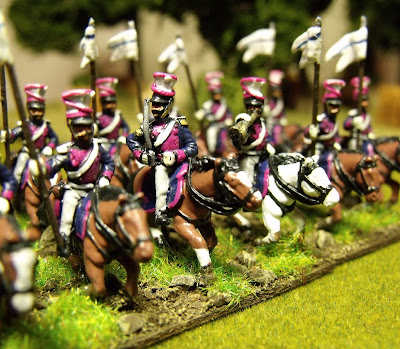 Until the Campaign of Austerlitz in 1805, there were three so-called horse regiments: Polish, Lithuania and Tartar, and one uhlan regiment, the Grand Duke Constantine Uhlans. In 1807 the horse regiments were renamed to uhlan regiments. The men were recruited from all classes of free Russian and foreign persons who were not subject to the poll tax and not under other service obligations. The length of service was prescribed to be not less than 6 years instead of 25 years !
In 1808 there were six regiments; Polish, Lithuanian, Tartar, Grand Duke Constantine's, Vohlin, and Chuguyev Uhlans. In December 1812 seven dragoon regiments were converted into uhlans. These new units were called by some as the “dragoons with sticks” as they didn’t even receive their new uniforms until the end of 1814.

The uhlans were armed as follow:, Officers, NCOs and trumpeters - curved saber, 2 hussar pistols. Troopers - curved saber, 2 hussar pistols, lance. The flankers, called in ulan regiments karabiniery, were armed with rifles.
The first uhlan regiments were recruited mainly from Poles and Lithuanians living in western Russia. (Poland had a high ratio of petty gentry who owned horses in contrast to Russian peasants and townfolks.)  The uhlans of the new regiments formed in December 1812 were made of Russians and Ukrainians.
Russian generals had mixed feelings about their Polish and Lithuanian cavalrymen. The problem was not their horsemanship and skills with weapon as these were good, but with their commitment to the Russian cause. For example in summer 1812 the uhlan regiments had a lot more deserters and missing men than casualties in combat. For this reason General Bagration, didn’t want the Lithuanian Uhlan Regiment being included in his rear guard. 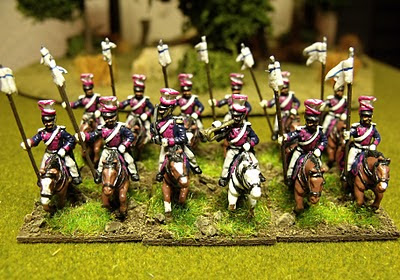 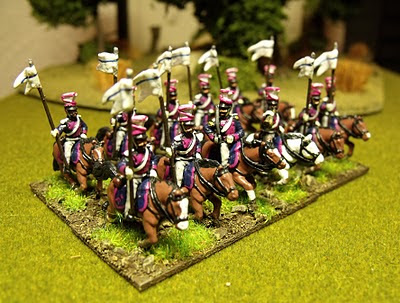