The War of the Roses - The Battle of Lee's Pond. 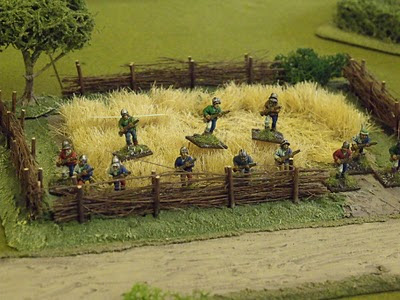 ﻿
AArrgghh!! Is anybody else having trouble posting tonight?? I've been trying to write and post this article for four hours, either this damn computer is playing up or blogger is, I keep placing photo's on the post and they keep vanishing, ggrr!  So I've tried something new, a slideshow. Fingers crossed and here we go.

Posties rejects met up today and fought the ficticous, Battle of Lee's Pond, set in 1460, near Alnwick castle.
For the rules we used Posties own take on WAB, with a few extra thing thrown in, for instance we throw D20, instead of D6 all relevant pluses and minus are added and subtracted as pips on the dice, this creates a more exciting game

The players on the Lancastrian side were Surjit-Lord Roos, the battle commander, Fran (The Lurker)- The Earl of Devon and Rich- Lord Clifford. I was the Yorkist battle commander, Lord Fauconberg with Smithy playing Lord Fitzwater. We each had to throw for our leaders class, Smithy threw a 6, giving him a brilliant leader, I threw a 5, giving me an efficient leader, while the poor Lancs army threw badly, he! he! Surj and Fran both threw a 3 giving them both a plodding leader, while Richard threw a 2, making him a buffoon!! The main differance this made were the range in which the leader could use his influance during the battle, Smithy's being 12, while the buffon Rich had only a 6' range.
Here are some photos of the game, if you click the picasso icon in the bottom right of the slideshow you can go to the album, which has a small description fro each photo, I had hoped they'd show up below...sigh!

Email ThisBlogThis!Share to TwitterShare to FacebookShare to Pinterest
Labels: 28mm, batrep, slideshow, War of the Roses