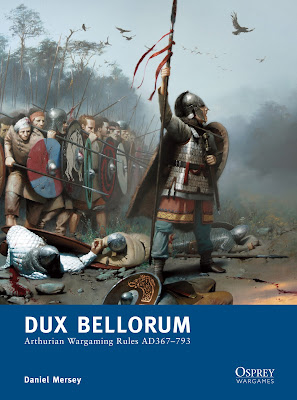 Some of you may have already seen or even written a review on the new rules Dux Bellorum, by Dan Mersey. I've been meaning to write up mine for some time now, but school holidays and life just got in the way, so its a bit later than I would really have liked to but here goes anyway.
As I previously said you may have seen other reviews, so I won't warble on too much about the technical side of the rules and I'll keep my review quite simple. There are two great indepth reviews over on Ferb's blog and on Dalauppror as well. Also a top notch interview with Dan himself in the recent issue of Wargames Illustrated, so check them both out if you can.
Early last month I answered a blog post an Dan's blog, and received a free copy of the rules a week or two later!!! Nice one!!!! But you can buy them on Amazon here, for a measly £8.39. Which in my opinion is a bargin. Its always difficult with new rules and their pricing. I've bought rules for £30, read them and thought they were rubbish, and been quite sick and angry that I've wasted my £30, ( like I'm you have?) but at under a tenner, you just can't go wrong!!

This has always been one of my favourite period's and I've never even played it before?? As you may have read previously on my blog, my favourite books are the Bernard Cornwell Warlord Chronicles, so these fit right in there!
The main thing I like about these rules is they are simple and effective. Dan set out some ground rules as he developed the game, which fit in perfectly with my idea of a great game.
Like I said I won't go into the technical side of the rules, but after reading them several times, I've found myself trawling the internet for some 15mm Romano-British figures on far too many occasions. I've resisted up until now, but I'm not sure how long I can hold...............Thanks Dan!!!!!!