I’ve loved Lee and Ray doing their “Donnybrook” and “What a Tanker” games with us Rejects via Zoom.  However, I must confess that I have had an itch for a wargame with field armies involved.  So, I thought it was time that I did one for my Reject friends.

I have presented my fellow Rejects with a fictional, ahistorical Seven Years War game set in Bohemia between the Austrians and the French.  The decision for this was mostly because I have yet to acquire any of the other armies.  I had also started with these two because they are in white uniforms and a quicker paint.

The Rejects, Ray, Lee, Surjit, Ian and John will be in charge of a number of brigades and give orders via email at various opportunities during the game.  I will then execute those orders on the tabletop using my 6mm Baccus miniatures and Koenig Krieg rules.

Background to the Battle

The French have proven faithless in honouring their treaty obligations to Austria; having succumbed to the temptation to get one over their centuries old rival, the Habsburgs.

Frederick and the Prussian army have found themselves bogged down in their faltering invasion of Saxony, coming across stubborn resistance in their siege of Pirna.  The Austrians are keen to march to their Saxon allies and break the Prussian siege lines.  However, the French have decided to launch an invasion into Bohemia which they believe will have the dual purpose of threatening Prague and then Vienna, and of capturing control of the road from Prague to the river Elbe and on to Pirna, thus stopping the Empress Theresa’s forces from relieving the Saxons.

It is 9am on the 1st October.  The French army is arriving from marching through the mountains in order to erupt into the flats of Bohemia.  The Austrians are marching with equal determination to secure the route along the Elbe and on to Pirna.  For both sides, the town of Stoliboz is the key to control the road to Pirna and to allow the French to march onto Prague.  Both armies are preparing for battle.  However, the early morning Autumn fog is taking its time to lift.  Both armies arrive effectively blind to each other’s movements.

The fog bound area around which scouts have attempted to reconnoitre is set out below.  The battle will start with fog covering the battlefield.

This is the view of the area, as reconnoitred, from the Austrian side (includes a great shot of the dehumidifier – this is in my cellar). 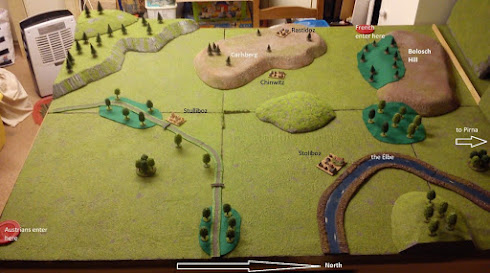 … and this is the view from the French side. 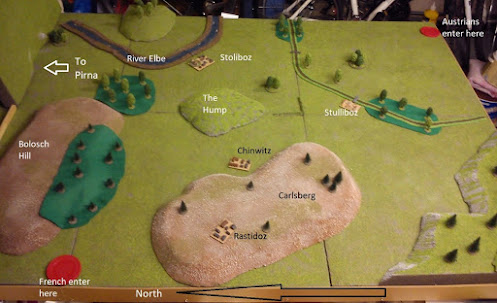 None of the hills impede movement for infantry and skirmishers but affect movement for artillery and cavalry unless the cavalry is in skirmish formation.

Entry into woods should be avoided by formed troops and artillery.

The river Elbe is unfordable.

The villages can be occupied by one infantry unit each.

The stream is fordable along its whole length but crossing them may (or may not) slow movement.  Defending on a riverbank confers advantage in melee but not defending in a river.

·         To maintain a secure line of communication with Prague via your entry point.

·         A stunning victory would also include control of the entry point of the French and forcing them to withdraw.

Alternatively:  The destruction of the enemy’s ability to engage in offensive action and therefore force them to retreat.  This is based on breaking the opponent’s morale through the destruction of units (artillery does not count) and brigades.

The two sides are as follows:

The generals have organised their units into brigades and have provided an order of march.

Because of the need to protect sensitive military intelligence (in other words stop Ray cheating!) (who me????? Never!) and due to the fogbound area prohibiting a clear view by the combatants, I cannot yet reveal the Orders of Battle.

So, the scene is set for each player to act in the role as generals and send their first orders for their assigned brigades.  Let us hope that they have discussed their deployment and laid down some good plans.  Of course, how soon they see each other will depend on the weather.  Though there is a hazy brightness in the sky that suggests the mist may burn off with time and reveal a fine day… but for whom?

Who would you bet on?  French or Austrian?