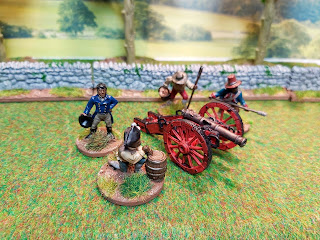 From what I've read so far, its highly unlikely that the Rebel force had or used any artillery. Some of the Rebels/slaves were very well treated and were highly educated, so I thought that maybe they might have had a little artillery training form the French or Spanish forces on the island. So I thouht it would be a good idea to include 1 artillery piece in their army. 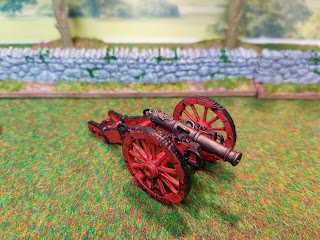 I'm not at all sure what make this gun is? I painted it a a dark red colour to represent a captured Spanish artillery piece, which means if I ever fancy getting some Spanish, I can always use this gun. 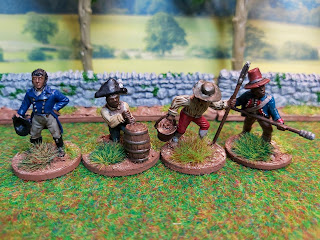 How to represent artillerymen for the Rebel Slaves? Was my first question.
All 4 figures are from Front Rank, the first is from their Napoleonic Civilian range. I did consider a head swap but chose to keep him as he is and have him as a Mulatto (a person of mixed racial race). The kneeling figure is from Front Rank's AWI range, with a Trent Miniatures head swap. The chap with the bucket is also from their AWI range, again I painted this figure up with a lighter skin tone as I wanted to keep his hat. The last figure is again from their AWI range with another head swap 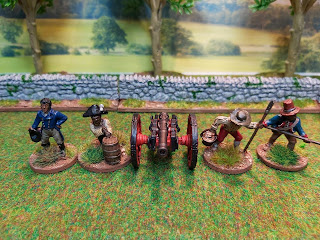